Pros and Cons of Nerve Burning

If you are terrified by chronic pain, you may need to undergo the Nerve Burning process, formally known as Radiofrequency Ablation or RFA. But before fixing an appointment with your healthcare provider regarding RFA, it’s time to evaluate the Pros and Cons of Nerve Burning.

Nerve burning through radiofrequency ablation is a surgical treatment that destroys part of nerve tissue to block nerve impulses from the body. RFA, also known as Nerve ablation, is a painless technique that interrupts pain signals and reduces discomfort in one portion of your body. However, despite its scientific safety, many individuals object to it.

Things you need to know about Nerve Burning or RFA?

The RFA or Nerve Burning procedure is performed by inserting a catheter into the affected area under ultrasound guidance. Then, heat is transmitted to destroy the tissue.

In order to be effective, it requires local anesthesia, which means numbing your tissues. The patient will feel less pain when the catheter enters and leaves the body, but no other side effects arise during the procedure.

It is a safe procedure with very few complications, which means that it can generally be performed on an outpatient basis, and the patients go home on the same day. However, if general anesthesia is needed for some reason, the patient must stay under direct medical supervision.

The pain signals your nerves send to your brain are interrupted by damage. The nerve, on the other hand, frequently tries to regenerate. If it does so, the effects are only transitory and generally last for 6 to 9 months.

The pros of nerve burning or ablation are that it can be done in an outpatient setting with minimal downtime for recovery; it's less invasive and can be done without surgical incisions.

As a result, there is a reduced risk of infection, less pain after the procedure, and shorter hospital stay. Also, since there is no surgery involved, the risks associated with this type of intervention are very low. Here are some evidence-based details you should refer to.

RFA is a non-surgical outpatient procedure performed under local anesthesia alone or with intravenous sedation drugs. This treatment option often requires only 2 to 4 visits, and most patients return to work within 1 week or less after their surgery.

According to a study, the technology followed during the nerve-burning process is still evolving but is minimally invasive and safe.

2. You can Recover from Pain in no Time

Unlike some surgeries, RFA does not require months of recovery time, and most patients can resume normal activities in significantly less time. This method also reduces the chance of infection since no incisions need to be made during the procedure.

In addition, the risk of damage to any major blood vessels is reduced thanks to imaging equipment such as ultrasound scans and fluoroscopy X-rays.

Since RFA does not require an incision. It eliminates the risk of tenderness and stiffness after surgery and problems with scarring or other types of skin irritation where the needle entered the body. This benefit is one of the notable pros of nerve-burning therapy for those who fear injections and incisions.

Patients treated with radiofrequency ablation are less likely to experience severe pain during their procedure than those with chemical Sympathectomy.

This is because RFA treatments only target the ganglion neurons causing pain signals to be sent along nerves in a specific area.

With chemical Sympathectomy, any neuron in the body is a potential target which means unnecessary nerve damage to surrounding tissue and organs.

The nerve burning in the neck procedure is extremely effective if done correctly, but keep in mind that all surgery involves risks, and RFA is no exception to this rule. This means that if complications occur during or after the procedure, there could be severe consequences.

However, this is extremely rare, and we can safely say that the benefits outweigh the risks as long as a skilled surgeon carries it out. Here are some cons of Nerve Burning Therapy you should consider.

1. Side Effects Are Possible

Although side effects are less likely to occur than chemical sympathectomy, RFA is not 100% without risk. Possible side effects that have been reported in patients receiving this treatment include:

It's important to note that these complications are rare, with an average of just 1-2% of patients reporting them during clinical trials.

2. Nerve Burning Procedure Cannot be Done on all Kinds of Pain

While ablation therapy can successfully treat most types of neuropathic pain, including nerve pain caused by cancer injury, medication overuse syndromes, and diabetic neuropathy, it cannot always help patients who suffer from other forms of chronic pain back/leg pain or pain trigger points.

3. Nerve Damage is Permanent and Prevents Some Patients from Driving

For those patients who experience paralysis following treatment, the loss of sensation may prevent them from ever driving again. This can be especially difficult for young individuals with family responsibilities who already feel additional stress since they cannot drive during their recovery.

It's extremely important to educate patients about nerve-burning side effects before the procedure begins so they are aware of possible risks associated with this form of therapy.

4. Nerve Ablation Side Effects Can Be Extremely Disabling

While most patients do not experience severe side effects after treatment, some have endured severe, life-threatening cases. These cons of nerve burning can be especially catastrophic since RFA is being done in areas of the body where medical help may take a long time to reach patients in an emergency.

Due to the anatomical structure of nerves within the back, legs, and trigger points, RFA cannot effectively treat these kinds of chronic pain symptoms even though they are neuropathic. For this reason, patients affected by back/leg pain should look into other treatment options for their condition in combination with ablation therapy if necessary.

The heat sink effect is a well-known problem that affects the efficacy of thermal ablation. The convected heat generated by the burning process can decrease the effectiveness of cold ablation, allowing local tumour growth during follow-up treatment.

Pringle's technique is a less invasive alternative to reducing the heat-sink effect when treating a tumour abutting a major vessel. However, for this method, patients may need to have an open laparotomy.

Radiofrequency ablation or Nerve Burning is a surgical procedure that helps treat many different diseases from heart arrhythmias to obesity, including some cancers.

However, it has not been approved by the FDA for most uses in America yet. Therefore, more research needs to be done on its effectiveness and safety before being used as an alternative to open-heart surgery. If your concern is not as big as such, it's essential to consult an expert and thoroughly acknowledge the pros and cons of nerve burning in the neck. 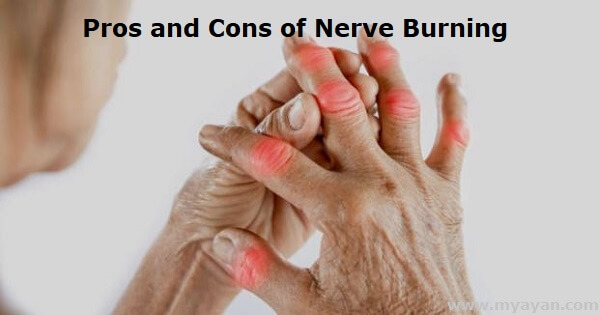 What are side effects of nerve burning?

The literature has reported a temporary increase in nerve pain, neuritis, neuroma, localized numbness, infection, allergic reaction to medications used during the procedure, and/or a lack of pain relief.

It's natural for some patients to feel a little more discomfort during the first few days following radiofrequency ablation, owing to nerve inflammation. However, don't be concerned; pain will lessen with time, and you may not start feeling much relief until several days after that.

Does burning a nerve work?

For individuals who have had successful nerve blocks, radiofrequency nerve ablation is 70-80% effective. Patients will feel relief after ten days of treatment, with pain lasting anything from 9 months to 2 years in duration.

Nerve pain is characterized by a burning, shooting, or stitching feeling. It can be as sharp and fast as an electric shock at times. In addition, people with neuropathic discomfort are frequently highly sensitive to touch or cold, which might cause pain due to stimuli that would not usually be painful, such as brushing the skin.