Pros and Cons of Raising the Smoking Age to 21

According to a study, Over 3 million young people under the age of 18 are current smokers. It is no secret that smoking is one of the leading causes of preventable death worldwide. In the United States alone, cigarette smoking kills more than 480,000 people each year – that’s more than 1,300 people every day. Raising the minimum smoking age to 21 could help save lives by discouraging young people from taking up this deadly habit. Honduras, Kuwait, Uganda, Sri Lanka, Singapore, and Samoa have already the set the minimum smoking age to 21 years. However, some nations don’t even have the law in place. There are certain Pros and Cons of Raising the Smoking Age to 21. And this is what it’s all about for high-schoolers and teens.

What are the pros of raising the smoking age to 21?

There are many pros of raising the smoking age, including:

2. Lives will be saved

Because fewer young people will start smoking, lives will ultimately be saved. Cigarette smoking is responsible for many preventable deaths each year, so anything we can do to reduce the number of smokers will have a positive impact on public health.

3. The cost of healthcare will go down

In addition to saving lives, raising the smoking age would also decrease the cost of healthcare. This is because smoking-related illnesses are expensive to treat, and if fewer people smoke, there will be fewer cases of these illnesses. For families incapable to incur costs of the treatment, these are potential pros of Raising the Smoking Age to 21.

4. There will be fewer secondhand smoke exposure

Secondhand smoke is dangerous and especially harmful to children. If the smoking age is raised to 21, fewer young adults will be smoking, which means there will also be less secondhand smoke exposure for everyone, including children.

Raising the smoking age is a proven strategy for reducing smoking rates. In addition to the New Zealand study mentioned above, another study in the United States found that when the smoking age was raised from 18 to 21 in Massachusetts, youth smoking rates declined by about 12%.

What are the cons of raising the smoking age to 21?

There are some cons to raising the smoking age, including:

One of the biggest challenges with raising the smoking age is enforcement. It can be difficult to prevent 18-20 year-olds from purchasing cigarettes, and even if they are caught, the penalties are often not severe enough to deter them from doing it again.

2. Some young adults will still find a way to smoke

Another challenge is that even if the smoking age is raised to 21, some young adults will still find a way to obtain cigarettes. Many adults are willing to purchase cigarettes for minors, and it cannot be easy to prevent this from happening.

3. Black marketing is one of concerned cons of Raising the Smoking Age to 21

If the smoking age is raised to 21, it’s possible that a black market for cigarettes could emerge. This would make it even easier for young adults to obtain cigarettes, leading to increased illegal activity.

4. There could be negative social consequences

Raising the smoking age could have some negative social consequences, such as making it harder for young adults to socialize with their peers of legal smoking age. This could ultimately lead to more social isolation and loneliness among young adults.

5. It’s not a guarantee to reduce smoking rates

The debate over whether or not to raise the smoking age has been ongoing for many years. There are pros and cons on both sides of the argument, and it ultimately comes down to each state deciding what is best for its citizens. While some feel that raising the smoking age will help reduce the number of smokers in the country, others believe it will simply push tobacco sales underground and make them harder to track. No matter which side of the debate you fall on, it’s important to be aware of both sides of the issue to make an informed decision about whether or not this policy is right for your state. 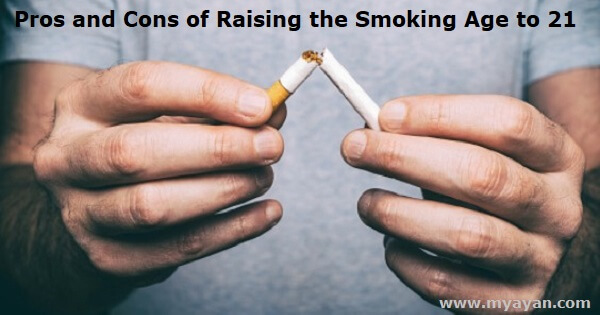 Do most smokers start smoking before or after age 21?

According to the Centers for Disease Control and Prevention statistics, almost all adult smokers begin smoking before age 21. 18 to 21 are particularly significant for many smokers who move from experimental smoking to regular, daily usage.

Should the smoking age in Australia be raised to 21?

According to studies, kids who can reach 21 without smoking are much less likely to begin. Every year, approximately 15,500 Australians die as a result of tobacco use. Tobacco21 wants to reduce smoking among the most susceptible age group by increasing the minimum purchasing age to 21 years old for tobacco products.

What is the lowest age for smoking?

It's not illegal to smoke or possess tobacco in public until you reach the age of 18. It is prohibited to sell or provide tobacco to a minor. Minors may not consume tobacco in any public area. Any tobacco product may not be sold to a person under 18 years.

Why do teens smoke?

Their friends egg them on to smoke, and they keep smoking. They perceive smoking as a means of rebelling and showing independence. They believe that everyone else is puffing away, so they should, too. Advertisements have been developed especially for teenagers by the tobacco industry to entice them.