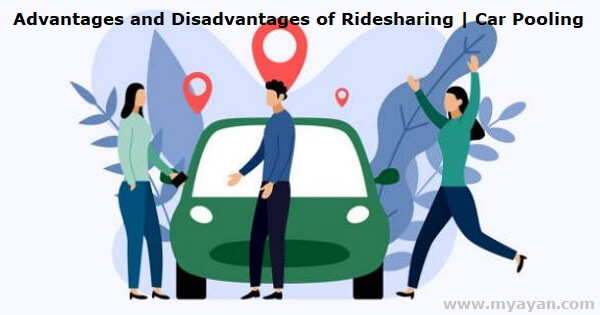 Sharing Ride can save you money as well as time. Carpooling is one of the most convenient ways to follow the same old route day-in and day-out. Mind your new ride partners, though; if you’re lucky enough, you’ll get to share your ride with the same person. Otherwise, you have a bit of hard luck. Let’s talk about some advantages and disadvantages of Ridesharing in terms of time, money, environment, and security.

What are the advantages of Ridesharing?

Look around, and you’ll see roads choked with traffic where engines and honks are another noisy problems to deal with. Ridesharing is, however, comes to the notice of many organizations to ride-hailing companies. So it’s not just the environmental benefits but numerous advantages of Ridesharing.

According to the recent stats, Uber and Lyft reported net revenue in 2019 of 14.1 billion USD and 3.62 billion USD, respectively. It’s not just the for-hire companies getting benefits of ridesharing; you can also save money on gas and parking.

This means your overall costs are lower while ridesharing than if you were driving alone. If you want to save more money on a rideshare, you can try different ways to save money on Uber and Lyft.

2. You can Get Social with ridesharing

You are likely to meet new people on your way to work or college, so there's a chance of building new links and getting social with someone sharing the ride.

Carpooling is a great way to meet new people in your area, which could be a good start for something new. Whether you're travelling locally or going long distances, there are probably other people who share similar interests to you.

According to Urban Mobility Report 2021, the annual costs of congestion amounts to $160 billion US Dollars, including 7 billion hours and 3 billion gallons of fuel burned. Money and energy are the vital players of an economy, especially in a place like New York.

Being stuck in traffic is one of the gruesome experiences everyone must have had in their lives. However, Ridesharing can reduce traffic congestion to a greater extent. The few vehicles on the road mean fewer traffic issues and eventually less pollution.

4. Environment Protection is one of the main advantages of ridesharing

With every 2-3 people sharing a cab, there are three vehicles on the road; add that to your winning list as you don’t contribute to environmental pollution. There is no point in overlooking the facts.

With fewer vehicles on the road, there will be lower emissions of Greenhouse Gases in the air, and eventually, its quality will be improved.

Drive-in and out of town, ride to an event or even go out for a holiday trip, there’s one thing for sure, you don’t have to worry about jumping the lights or overspeeding.

What are the Disadvantages of Ridesharing?

Despite being a sustainable solution for the current and future problems, problems with Ridesharing can be a great deal of stress for both drivers and commuters. If you have been sharing your ride for quite some time, you may have experienced these Disadvantages of Ridesharing.

1. Carpooling is inconvenient for drivers

2. It can be difficult to find a carpool that matches your schedule

Some passengers, especially those who have to drive for work at a specific time, will not be able to carpool as they would never know when the driver will work that day. This can also mean that they would have to drive back home in the middle of a trip if they have no one to drive them at the pickup time.

Many people are worried about the safety of riding with a stranger especially if they have never met before. One of the leading disadvantages of ridesharing is that you may have to sit in traffic with other drivers or passengers for longer periods. Carpooling requires more planning and group coordination among your friends and family which can be a hassle at times. The lack of privacy in a carpool also means there's less space for passengers to work, read, or sleep.

4. Surging fares are among the major disadvantages of ridesharing

If you are a frequent traveller, prepare to be hit by a surge in for-hire services. According to the recent report by NY Times, there is a startling jump in Uber and Lyft fares. In some cases, passengers say, their Uber rides from airports cost as much as their plane tickets.

According to a recent study, a recent analysis by the research firm Rakuten Intelligence found that the cost of a ride was 37% higher in March than it was a year ago. In April, the cost was up 40%.

Uber and Lyft being the renowned names in the ridesharing industry are operated through their official apps. However, since the apps require authentication and a stable internet connection, you may not always be lucky to get hitched to a ride instantly.

Consider the downtime and the unavailability of drivers as the biggest disadvantages of ridesharing. In addition, some frustrated users complain about booking their rides and getting them automatically cancelled right away (either by drivers or the app).

Conclusion on Pros and Cons of Ridesharing

Ridesharing benefits are countless, especially when you have cost considerations and health problems while driving on your own. However, it sure has its downsides as well. If you already have a long commute and don't mind spending time with other drivers on your way to work, then maybe carpooling will save you money and make your life more convenient. In addition to that, pollution and traffic congestion are worth giving a thought to while assessing the Pros and Cons of Ridesharing.

What does carpooling involve?

Carpooling helps to reduce the number of automobiles on the road. Carpooling reduces the amount of single-occupancy vehicles on our roads by encouraging people to travel in groups rather than alone. In addition, CO2 emissions caused by vehicle use can be reduced due to carpooling.

What are advantages of car pooling?

Carpooling is also environmentally beneficial. Not only will you be saving money, but you will also be assisting to reduce the expenses we all pay for new roads, road maintenance, and air pollution-related health expenditures. In addition, there are fewer cars on the road when people carpool, which results in decreased Greenhouse Gas (GHG) emissions and better air quality.

What is standard car sharing?

Car sharing is a kind of car rental in which members of a vehicle-sharing company utilize an insured automobile. Gas and free dedicated parking may be included depending on the business model.

What can the government do to encourage people to carpool more?

Carpooling can benefit you and your family by reducing gas usage, lowering vehicle maintenance costs, and increasing safety. Enhance carpooling awareness by imprinting bumper stickers and license plate frames with popular ride-sharing applications. You could also offer incentives to those who caught carpooling.