Advantages and Disadvantages of Hyperloop

Even if theorized, Hyperloop technology is a revolutionizing invention from Elon Musk’s Tesla and Space X companies. The Hyperloop Transportation system is estimated to operate above as well as beneath the ground and water. Hyperloop technology, if implemented, is speculated to reduce travel times by a huge difference.

Does transporting passengers and cargo through pods sound possible? Will hyperloop technology work effectively at hypersonic speed? Can there any risks? The Advantages and Disadvantages of Hyperloop explore the possibilities through multiple glasses.

What are the Advantages of Hyperloop Technology?

1. High Speed is one of the advantages of Hyperloop Technology

The hyperloop pods reach speeds of more than 500 miles per hour up to 760 mph. That means it’s the fastest mode of transportation ever. The hyperloop is said to take 30 minutes maximum to transport commuters from LA to SF and vice-versa. The same distance usually takes 8 hours by car depending on traffic.

Vacuum trains will cut the time spent in travelling, which trains can cover more distance in less time to reach point B from A and vice-versa. More cargo and passengers can go and return the same day. This would also enhance business besides improving citizen’s livelihood.

Hyperloop technology will use Solar Energy and cut travellers’ transportation emissions by 90 to 95%. According to Tesla Motor’s founder Elon Musk, the Hyperloop pods will run on wind energy and solar-powered magnets, which control the pods' movement and stop them whenever necessary.

Elon Musk also said that the hyperloop technology would generate more energy than the capsule would use. Solar panels would be in place on the tubes' roof to supply constant power for its operations.

The hyperloop is estimated to cost around 1/10th of what it costs with the California high-speed railway system. This means that passengers may only need to pay as little as $25 for a single trip. However, the Hyperloop Train project is estimated to be around $7.5 billion.

On the contrary, project engineers believe that the hyperloop project may cost more than the high-speed railway system as the cost may differ by slight margins. But that’s still one of the advantages of hyperloop technology, given that no other train can reach the destination as quick as hyperloop pods.

The hyperloop technology system runs on clean energy as there will be no solar and wind power carbon footprints. There will be no emissions of Hyperloop Transportation Technologies as the system is built on an electrified mechanism.

HTT utilizes a combination of solar, kinetic, wind, and geothermal energy sources. This technology would produce 20% more energy than the pods consumes.

What are the Disadvantages of Hyperloop Technology?

Although the HTT system is sustainable and far better than conventional transportation systems, there are still numerous hyperloop limitations. Monetary expenses, external issues, and even technical glitches haunt the project developers and engineers. Some of the issues are listed below.

1. Chances of failure are the threatening disadvantages of Hyperloop

Given the tube network is vast for hyperloop pod to travel, the entire system needs close monitoring and maintenance. Even flyspeck of Technical glitches, shortage of power, or malfunction can occur anytime.

Even a single dent can cause a vacuum collapse which would be even more painful since the tube extends to vast lengths. In addition to that, an accidental crash into one of the pillars supporting the tube can lead to catastrophe. For these disadvantages of hyperloop technology, the entire network would have to be monitored 24/7.

The hyperloop tubes are air sealed, narrow, less spacious, and ventilation-free. Experts speculate that would cause many problems for passengers as they are not used to travel this way.

Lack of ventilation would lead to Claustrophobia as there are no windows and passengers would be travelling in small pods. Passengers’ movement would also be restricted during the trip.

3. Steel tracks will expand due to thermal expansion

Hyperloop technology will use steel tracks for the capsules. Steel expands and contracts when the temperature rises and falls. When tracks heat up, they change their volumes.

Linear expansion is one of the common disadvantages of hyperloop transportation since it may destroy the tube in the process. The only way to curb this problem is by leaving small gaps at the right spots, just like the traditional railroads use.

As experts say the pods will run at a hypersonic speed of up to 760 mph, the pods will have to use a high-end mechanism to come to rest instantly. It’s the passengers who would ultimately face the risks of such limitation of vehicle. Also, the passengers would have to face the massive G-forces, which are the hardest to endure at hypersonic speeds.

Terrorists can easily target public transport, and Hyperloop tubes are the easiest to attack. A tube designed for hundreds of miles carrying numerous passengers at a time gives rise to the possibility of a terrorist attack.

A single puncture made deliberately would cost many human lives apart from the financial loss. Even if agencies deployed security, it would dramatically ramp the running cost.

Conclusion on Pros and Cons of Hyperloop Transportation System 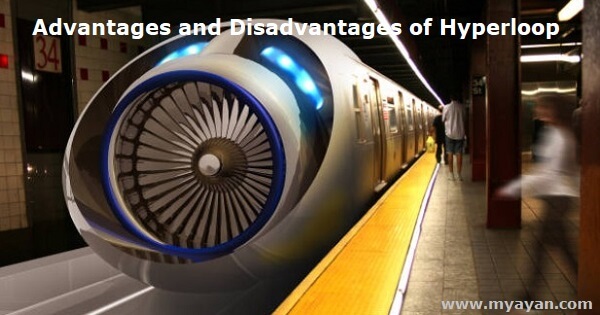 Who invented the Hyperloop system?

In 2013, Elon Musk, the renowned entrepreneur and CEO of Tesla Motors and SpaceX, unveiled a concept for a vacuum-and-maglev-powered high-speed railway that would travel in tubes. It would be called the Hyperloop.

What problems would hyperloop solve?

The engineering behind the hyperloop has made it resistant to earthquakes and one of the safest modes of transportation. As a result, delays in our daily commutes to and from work would be reduced or eliminated.

How will hyperloop change the world?

Magnetic levitation is a method of transportation that uses magnetic fields to transport small groups of people in tubes at high speed. The value of this technology to protect passengers from high-density populations on trains and planes during health crises such as Covid-19 is being recognized by state and federal governments.

Is hyperloop good for the environment?

The transportation system that will run through tubes at high speeds is expected to be fast and cheap. It will link major cities via a tube network, such as London to New York, in only 30 minutes. However, the environmental impact of high-speed rail would be far greater than that of Hyperloop because the closed system may be bored below or elevated above the ground.