Advantages and Disadvantages of Gasoline Cars

The future of gasoline cars may be unpredictable, but they are still turning up the heat on the road. According to green car reports, gasoline cars will remain dominant till 2040, i.e., roughly; 20 years from now. Many people consider several factors before they purchase a vehicle. Pricing, mileage, and speed are the major concerns for everyone. These Advantages and Disadvantages of Gasoline Cars will help you understand whether gas-powered cars are a better investment or not.

What are the advantages of Gasoline Cars?

Gasoline cars have been is use for nearly 140 years now. There is a reason why people buy petrol cars instead of electric cars or diesel-powered cars. Some of the advantages of gasoline cars must be considered as the automobile companies bringing the modified petrol engines and adding more features to make them more convenient.

1. Cost is one of the major advantages of Gasoline Cars

Compared to Electric cars and their diesel counterpart, gas-powered cars are the best cost-efficient option. You can choose any make and color to your liking and even pick the engine type. One of the reason for their low cost is low cost of manufacturing.

Gasoline cars have better pickup and easy acceleration. That’s the biggest reason why racing cars run on gas. They are lighter in body and mechanism and outcompete diesel versions in terms of speed and responsiveness.

High on acceleration, gasoline engines are also less noisy. Cars fuelled by petrol are more silent than their diesel variants. Since lightweight plays the key role in gas-powered cars, the vibration due to load on the revving engine is comparatively lower.

Low service cost on repairs and maintenance are major advantages of gasoline cars as you can find a repair shop easily. Also the spare parts of a gas-powered cars are easily available.

The biggest factor why gasoline cars are widely sold is the availability of fuel. You can find a refilling station almost everywhere these days. Not only it’s convenient, but it also keeps your car’s tank filled.

What are the disadvantages of Gasoline Cars?

1. Emission is still among dreaded disadvantages of gasoline cars

Even if Petrol vehicles are on average less polluting than diesel vehicles, they do emit carbon monoxide and other particulates into the environment upon combustion. Although the emission of fine particles and CO2 is less, there are around 1.3 billion cars out on the road worldwide, that many vehicular emissions seem too much to deteriorate the air quality.

Gasoline cars have low fuel efficiency means that, even if you can avail fuel for your car easily, you won’t be able to travel farther without refueling your car. This counts as one of the biggest disadvantages of gasoline cars as compared to hybrid and diesel counterparts.

Fuel efficiency and engine capacity of a gasoline car detriments over time. These factors directly affect the resale value of a vehicle as the same accounts for a limited lifespan.

Exposure to Gasoline can occur from filling your tank, from a gas leak in your engine, or from general spills and accidents. Every year, more than 5000 gas station fires are reported in the US alone.

Humans can be affected by ingestion, inhalation, or even fire incidents at gas refilling stations. Gasoline cans reportedly ignited or exploded in about 5% of thermal burn injuries and fatalities.

It’s a fact that Fossil fuels are non-renewable sources of energy, and gasoline is processed from these sources underneath the earth’s surface. We may run out of gasoline in the nearing years, which is among the greatly feared disadvantages of gasoline cars and other vehicles. The value of gas-powered cars will plummet strikingly.

Conclusion on Advantages and Disadvantages of Gasoline Cars

On the scale of power, speed, low efficiency, lower price value, and environmental concerns, gas-powered cars are not much different from diesel cars. Pretty much depends on the prices and availability of fuel to power the engines of petrol cars. The rest is clear from the pros and cons of gasoline cars considering progressive research in the automobile sector to find the best alternative, such as Hydrogen Energy. 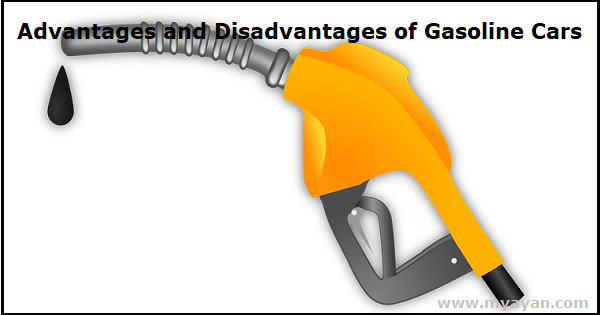 What are some disadvantages of using gasoline cars?

Filling your tank, having a gas leak in your engine, or dealing with other spills and mishaps can all result in gasoline coming into contact with you. In addition, if you have a good system or soil near your driveway, gasoline might enter the water supply or pollute the surrounding environment.

What are the advantages of a gasoline powered car?

Gasoline-powered automobiles take advantage of a contemporary infrastructure designed for their use. Gas stations and automobile repair shops can be found on every corner, making gasoline cars convenient and easy to operate. As a result, gasoline vehicles are ideal for budget-conscious buyers who want to purchase a vehicle upfront.

What is wrong with gasoline cars?

Why are gasoline cars better than electric?

EVs accelerate quicker than gas-powered vehicles and have more than enough speed for regular use. This is because electric motors are simpler than internal combustion engines. Traditional gasoline automobiles require additional power to go through additional moving components, such as the gearbox, making them less efficient.

What are the disadvantages of a diesel car?

Diesel vehicles generally cost more than standard automobiles. Diesel fuel is expensive in most countries. A diesel engine will be more difficult to repair. With a diesel vehicle, you won't experience the same high speed performance.