Advantages and Disadvantages of 4 Stroke Engine 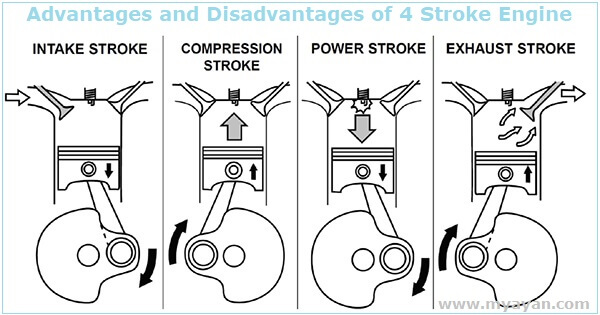 4 Stroke Engines, also known as gasoline engines, have been in research for decades. These Internal Combustion Engines (ICE) are still used to power most automobiles, light trucks, medium-to-large motorcycles, and lawnmowers. A Four-stroke engine is an internal combustion engine in which four strokes are needed to complete one power cycle. There are both Advantages and Disadvantages of 4 Stroke Engine that need consideration being still in use today.

The first gasoline-based, 4-stroke cycle engine was built in Germany in 1876. In 1886, Carl Benz began the first commercial production of motor vehicles based on this engine type. Later, every automobile company took on manufacturing cars and vehicles touching the lightning fast speed up to 127 miles an hour.

Despite the simplicity of these engines, fast acceleration, low pollution, economy, and great power, the vehicle based on this engine type are under scrutiny for various factors. Many factors have led to emergence of Electric Cars and hybrid cars such as vehicles running on Hydrogen Energy.

What are the Advantages of four-stroke engine?

Almost every vehicle used today consists of four-stroke gasoline or diesel engines, making it an important technology. Although electric cars and electric bikes are on the rise, the technology is not good enough to produce high speed and power vehicles capable of heavy transport. The widespread use of this variety of I.C engines is due to numerous benefits of it over 2-stroke engines. Here are some advantages of 4 stroke engine.

The torque generated in the engine is higher than other traditional engines with the same amount of fuel injected. The higher torque is beneficial in making a vehicle run smoother and with a higher power. The high torque is capable of providing faster vehicles with less vibration and noise.

The life of the 4-stroke engine is more due to the better lubrication and cooling system. It decreases the wear and tear of the engine cylinder and its various parts, which is comparatively more in other variants. Also, the better dampening makes them more stable at higher speed and power operations.

3. Fuel Efficiency is one overcoming advantage of 4 Stroke Engine

Due to the presence of valves, the intake and exhaust is facilitated with greater efficiency and the fuel losses are controlled. Unlike 2-stroke, there is no scavenging in these engines, and there is only time intake of fuel during the four-cycle operation.

As the exhaust is better controlled, the fresh charge is only available for combustion. This makes this engine a better option with regard to environmental impacts. The other traditional vehicles like a steam engine and 2-stroke create more pollutants than the 4-stroke engine.

For lubrication and cooling, there is no need of adding lubricant oil to the fuel. It decreases the cost of oil, making it more economical, and the other lubrication techniques are more efficient to safeguard the internal parts from frictional damages. Also, the power losses are minimised due to better design and technology.

What are the Disadvantages of 4 stroke engine?

Although the world is deeply dependent on a 4-stroke engine, advancements in technology will lead to better vehicles in the future. It might be possible to see flying cars and engines in future, which may need a more advanced mechanism for power generation inside the vehicle. The main disadvantages of 4 stroke engine are the limited fuel resources and the pollution, which have increased tremendously due to vehicles worldwide. Here are few reasons why 4-stroke engines need innovation and may become a thing of the past in the coming years.

The power generated in 4-stroke is half of the power produced in a 2-stroke engine. It is due to the number of strokes required to complete one rotation are more in this type of engine. This makes them a less powerful engine as compared to its less complicated version.

The number of parts and various inputs like cooling, lubrication, valves, design makes it very complicated to design and even more challenging to construct. Even a slight variation or defect can cause complete failure of a four stroke engine or reduce its efficiency and working life.

The more number of parts included makes it costly compared to simpler designs. The designing and production become costly and time-consuming, increasing the overall cost of the vehicles comprised of this technology. Even with the same design of the vehicle, the limitation of a four-stroke engine is that it's more expensive than a 2-stroke vehicle.

Provided, the engines use diesel and gasoline as the main power resource to run the machinery. Let's also acknowledge the fact that one day, the world will run out of non-renewable energy sources such as petroleum. The refinement and transport of petrol/diesel makes them an expensive resource and increases vehicles' transport charges. As petroleum prices are on the rise, this indirectly affects the economy and boosts inflation in the country.

5. Regular maintenance is one of the leading disadvantages of 4 Stroke Engine

The vehicles carrying these I.C engines need regular maintenance and servicing. This also increases the cost burden on the consumer. The overall operational and maintenance cost of the vehicles is rising and might make them unviable to use, increasing the moving cost of products and services.

Conclusion on Pros and Cons of 4 Stroke Engine

Today Petrol/diesel 4-stroke engines are used by almost everyone in public or private transport. Even the things required on a daily basis are shipped to your doorsteps from various parts of the country using these facilities. So it might be impossible to acknowledge the benefits of this powerful machinery, but understanding the pros and cons of 4 stroke engine. Yet, the world needs some other resources to cope with future power requirements and reduce environmental damages.

What is the advantage of a 4-stroke engine?

What is difference between 2-stroke and 4-stroke engine?

What fuel do I use in a 4-stroke engine?

Four-stroke engines are used in most lawnmowers. These require high-quality, unleaded Gasoline with an octane rating of 87 or higher. You may use gas-containing ethanol. However, it should not exceed 10 percent ethanol content.

Do you mix oil and gas in a 4-stroke engine?

Because two-stroke (two-cycle) engines require precise proportions of oil and gas to function as a lubricant in the crankcase, they must be mixed in specific quantities. Four-stroke engines, on the other hand, consume oil and gas separately.