Advantages and Disadvantages of Speed Bumps 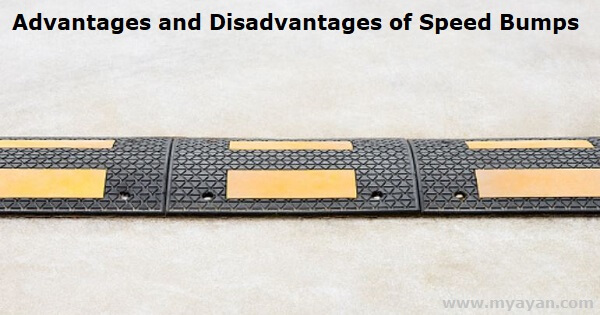 Speed bumps, also called speed humps are effective and aggressive ways to calm the raging traffic. These traffic security structures can easily bring speeders down to 10-15 miles an hour. Easy and cost-effective, speed bumps are highly beneficial to avoid mishaps, especially in accident-prone areas. However, there is another side to look at when it comes to hindrance in emergency services such as Ambulances. The Advantages and Disadvantages of Speed Bumps detail the pros and cons.

Why are Speed Bumps/Humps Installed?

The main purpose of elevating the speed humps by 2-4 inches above the road is to slow down traffic and high speeding vehicles to avoid accidents and damages to people and property. There are signs on the road alarming the drivers to slow the speed of their vehicles.

Usually, these are found on city roads and not on highways as the immediate brakes on roads can also cause road accidents. Drivers are well aware of the different kinds of speed bumps, follow the traffic guidelines, and do not drive over specified speed limits.

However, every road and vehicle has a certain capacity, and turns and twists around the paths require less speed for safer turns that can be dangerous. The physicist and Nobel Prize Winner, Arthur Holly Compton, designed and invented traffic bumps after noticing high-speed motor vehicles in his locality. Today, people may be affected by the pros and cons of speed bumps while driving on different routes.

What are the Advantages of Speed Bumps?

The idea behind the speed bumps is to create safe travel for both drivers and pedestrians. These can be annoying to most of the drivers but helps control the traffic conditions to a larger extent. There are numerous advantages of speed bumps in densely populated areas with schools or hospitals in close proximity.

The main purpose of a speed bump is to create an obstruction for high-speed vehicles and slow them down. However, they are only able to control them to an extent beyond which the drivers need to be sensible about children and people walking on the same roads in local areas.

2. Reduce Accidents are a key advantage of Speed bumps

According to the WHO, approximately 1.3 million lose their lives in road accidents and crashes. These crashes are mostly a result of overspeeding, and to keep them checked; speed bumps are a useful tool. It may not be able to stop all these clashes but can reduce them to an extent. According to UK-based research, speed bumps are helpful to reduce road accidents by around 44%.

Another useful application of speed bumps is that they are quite helpful in controlling and regulating traffic. The traffic regularly moves and obstructing it now and then help it move at a controlled pace and doesn't create huge traffic problems.

The construction of bumps is very easy and doesn't require any huge machinery and tools. These can be created with ease and installed wherever needed with the same material used for roads. As it is also a part of road construction, they can be constructed while building roads. Speed bumps can be built using any of the materials such as concrete, plastic, or rubber depending on the road type and weather conditions.

5. Useful in School and Residential Zones

These zones have high children's population, and markets and local shops for residential people make them even more crowded. Therefore, any high speeding motor vehicles cannot be allowed to run freely in these areas for the safety of local people and children. Speed bumps not only tames speeders but also restrict other drivers and riders within the adequate speed limit in densely populated areas.

What are the Disadvantages of Speed Bumps?

These structures are often installed with a high crown, and passing them at higher speeds can be shaky for both the passengers and the vehicle. Additionally, they are very annoying and can be a problem for ambulances, bike riders, and pregnant ladies. Finally, bad weather conditions such as rain or snowfall can add more to the disadvantages of speed bumps making the road slippery.

The motorists usually avoid a road with more bumps and find an alternate route to avoid them. This creates high traffic conditions for another road which starts getting used regularly. The local drivers get used to the road and avoid being trapped in roads filled with bumpy rides.

Speed bumps become the centre of most traffic noises as drivers have to re-accelerate their engines after crossing one. Coming down to 10-15 miles an hour makes motorists hastier to rev the engine up to maximum speed. This causes huge vehicular noises and horns beeping over your head. This can be very frustrating for residents and people nearby at times.

A speed placed in the wrong area can do a lot more damage to motorists and bikers. Likewise, bad visibility may easily make you overlook a speed hump leading to potential risks.

Bikers may also find it difficult to deal with speed bumps built at sharp curves. Most sports vehicles have comparatively lower chassis structures to avoid losing balance at high speed. As a result, humps can collide with the vehicle breaking down lower parts of the cars and bikes.

To slow down, gradual vehicle brakes must be applied for a safe ride, and an instant stop can put a load on the braking system and tires. These can even cause failures to brakes and also can cause them to skit. Unfortunately, this is also a reason for many collisions.

The disadvantages of speed bumps can be starker if the road is covered by snow. If there are no signage and painted indications for drivers, they are certainly at the risk of an accident.

The vehicles carrying emergency services like ambulances, fire trucks, Police cars, Water, and food supplies also get slowed down along with other vehicles. Speed is vital for vehicles to reach the destinations timely. In addition to this, the patients have to suffer jerks due to these elevated structures on the roads.

Conclusion on the Pros and Cons of Speed bumps

It can be difficult to judge the usefulness of the bumps installed on the road as it can be both a problem and a solution from a different perspective. Overall the pros and cons of speed bumps are comprehensive if you are a motorist spending hour behind the wheels. Speed bumps are beneficial for locals but a problem for drivers and passengers. When placed at regular intervals, these structures maintain normal speeds but can be a trouble if placed at the wrong location.