Advantages and Disadvantages of 2 Stroke Engine 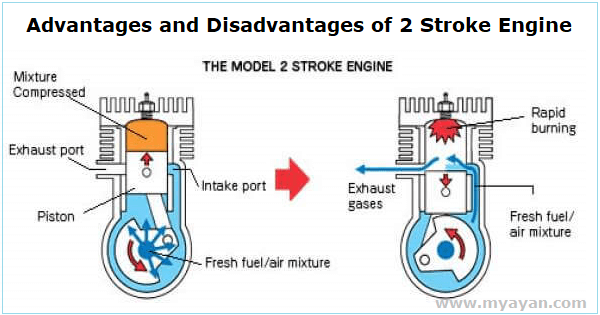 If you own a vintage car or dirt bike, you probably run a 2 stroke engine vehicle. Not only vehicles, a two Stroke engine is used in lawnmowers, leaf Blowers, chainsaws, and string trimmers. So, there’s probably at least one device powered by a two-stroke engine sitting in your garage right now. Although the new trend towards electric vehicles is increasing and ways to environment-friendly transport is needed to be found, the two-stroke engine is still in use for many purposes. That brings more attention to the Advantages and Disadvantages of 2 Stroke Engine in today’s era.

A two-stroke engine is an internal combustion engine consisting of two strokes for one complete power cycle. It was invented by Karl Benz in Germany, who made its use commercial.

A power cycle includes intake, compression, combustion, expansion and exhaust. In this type, the cylinder consists of an inlet and outlet port instead of valves. The upward and downward motion of the piston allows the fuel to come in and forces the exhaust gases out of the cylinder.

What are the Advantages of 2 stroke Engine?

Dirt bikes, lawnmowers, chainsaws, jet skis, etc., are few applications of 2-stroke engines that are still used despite newer technologies. However, from generating high power to lightweight vehicles, there are many advantages of 2 stroke engines missing with other complicated machines. Here is the list of few benefits of this type of I.C engine.

The same engine capacity and dimension produces more power, and the power is uniform in nature. Also, the power-to-weight ratio is more, which means lighter vehicles can generate more energy, and engine placement is also easy in the vehicles.

2. Low Maintenance is among noteworthy advantages of 2 Stroke Engine

As there is no lubrication system, maintenance is relatively easy, and regular valves change also not required. While in complex engines, regular maintenance is necessary for the machines to work correctly and keep them working in proper condition before wear and tear of the cylinder.

The absence of a complex mechanism makes the 2-stroke cycle engines cheaper and easy to construct. These engines don't include a various system that increases the overall cost of the machine. They are light in weight and create higher power, making them suitable for lighter vehicles that are less costly.

Since there is no problem with fuel transfer, it can be placed in any position, either vertically or horizontally. The placement of the engine doesn't affect the efficiency and working of the vehicle, which makes it a better choice for modified vehicles where different structural changes can be done.

The high power produced in this engine makes them capable of quicker acceleration than electric vehicles or vehicles running on hydrogen energy. The lesser number of strokes required generates power quickly and continuously without any deformations or gaps.

What are the Disadvantages of Two-stroke Engine?

Although gasoline and diesel engines find applications in various fields and have higher technical valves, they have been banned in different states. The main disadvantages of 2 stroke engines can be pollution, noise, cost, and even traditional technology, making them a less valuable innovation today. Here is a list of few limitations of this internal combustion engine.

The wearing of 2-stroke engines is higher, and the average life of machines based on this becomes shorter. The high power generated in the engines makes knocking and other wears of the inside walls and the piston rings. The lubricant is mixed with oil to provide lubrication which makes it less efficient.

2. Pollution is among concerning disadvantages of 2 Stroke Engine

During the exhaust of burnt fuel and gases, some of it remains inside and burns during the next combustion cycle. Therefore, it creates more pollution and is not suitable for the environment. The lack of a proper inlet and exhaust mechanism is the reason behind this, and this is why it has been banned in some developed countries.

Although few enthusiasts may love its sound from an engineering point of view, any vibrations and sound produced in a machine is considered harmful. This decreases the stability of the engine and makes the operation loud. For this purpose, various dampeners and silencers are used in different machines.

It is the process of removal of fresh charge or oil during the exhaust cycle. The absence of valves makes the mechanism simpler, but since the charge enters through the transfer port when the exhaust port is open, it leads to the exclusion of some fresh charge with the exhaust gases. This decreases the fuel efficiency of the engine.

The coolant and lubrication oil are required separately, increasing the cost of oil needed to keep the engine cool and avoid failure. Any machine generates heat while working, and its parts need to be cooled and lubricated to prevent wear due to friction. It is also required to increase the efficiency and power losses in excessive heating. The lubricant, which is mixed with oil, is quite costly.

Conclusion on Pros and Cons of two Stroke Engine

Among the first engines, the two-stroke is the most prominent and less polluting. Still, with the newer technology, the world is looking towards more economical and non-polluting ways of transport. This makes two-stroke engines traditional and less valuable, but there are still places where it finds application until electric vehicles take over. For those loving dirt-racing, two-stroke engines are still scaling mountains.

What is a two stroke engine?

A two-stroke engine produces power of the same principle as a piston engine, where one cylinder offers a power stroke for each crankshaft revolution. In addition, the crankcase and the moving parts of the engine are provided with a lubricant to reduce friction during the power stroke.

How does the 2 stroke work?

The first stroke is downward of the piston, creating a partial vacuum that draws air and fuel into the crankcase. The second upstroke compresses this mixture, transferring it to the combustion chamber just before the spark plug fires. Power is provided by the burning gasses escaping at the end of the second stroke.

What are the advantages of 2 stroke engine?

The lighter weight, smaller size, low vibration, and smoothness are some of the most important advantages. It is suitable for both stationary and vehicle applications. The fuel efficiency is another advantage for the two-stroke engines with respect to four-strokes due to its higher power-to-weight ratio due to its lighter weight. Two-stroke engines provide a compact power-to-weight ratio compared to four-strokes because the engine itself weighs less and thus does not need a heavy frame or material.

What are the disadvantages of 2 stroke engine?

The disadvantages of the two-stroke process are that it is less efficient than four-strokes, has shorter life cycles, has higher emissions due to oil mixing with fuel, and requires more frequent maintenance.