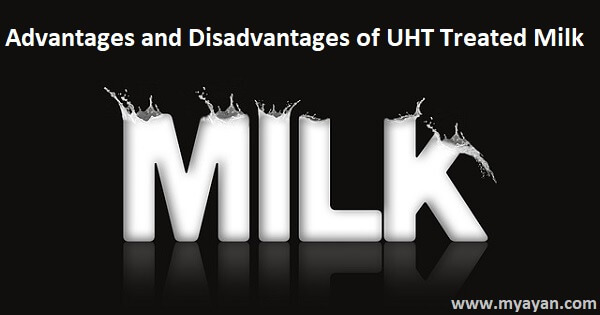 What is UHT or Sterilizing of Milk?

Ultra-High Temperature Processing is also termed as Ultra-High Treatment or Sterilization of Liquid foods. This process involves heating the liquid at a higher temperature to obtain bacteria and enzyme-free product that is scientifically harmless for consumption. Same way, the motive behind treating milk through higher temperatures is to make it healthier for everyone. The milk is processed at above 135 °C (275 °F) to eradicate all the unhealthy microorganisms. The average time of milk to undergo the UHT process is about 2 to 5 seconds.

What are Advantages of UHT Treated Milk?

Treating milk at Ultra-high temperatures results in several benefits that include the following. These benefits of UHT Treated Milk are noticeable and can help you save time and reap health-related advantages upon processing and consumption.

Sterilization makes milk lighter as once you have treated milk at ambient temperature, the number of microorganisms turn almost zero. The time you take to process it further is also reduced as the impurities and non-friendly organisms are already eliminated. This is why you can brew yourself a cup of coffee of tea within a couple of minutes.

Sterilized milk lasts longer than its raw or unprocessed form. Right after the UHT processing, milk is packed into containers that can be stored easily for days in your refrigerator. The shelf life of milk contained in air-tight packaging stays fresh for up to nine months. However, consumers are advised to use it within one week from packaging and processing once it arrives in the market.

With UHT treatment, the heat-resistant bacteria present in milk gets destroyed which also ensures its safety for you and your kids. Processed milk is also readily available for consumption that is the right choice for consumers concerned with time and energy.

What are Disadvantages of UHT Treated Milk?

There are always some shady and hazy facts to let you heed to an opposite opinion. About UHT treated milk, here are some contradictory factors you may want to consider as Disadvantages of UHT Treated Milk.

According to a study from Lee Dexter, A microbiologist based in Texas, the extreme heating method of milk also destroys the fragile human-friendly enzymes and proteins. This may also result in a negative immune response or leaky gut since the body fails to accept commercial milk due to the absence of healthy elements.

Processing milk through UHT treatment does take up energy and hard to economize. Although, the production compensates for the expenses reaching the end-consumers, setting up and installing equipment and machinery are also uphill tasks. Initially, milk processing plants require some capital investment.

If you are more of a person drawn to the original taste of milk, mind you’d not want to switch to UHT treated milk. Reports based on findings, state that UHT treatment of milk turns it into a cabbagy taste. Apart from the missing valuable vitamins and amino acids, the next problem of UHT Treated milk to deal with is a modified flavor.

4. Packaging of UHT Milk is Non-Biodegradable

UHT Treated milk comes in the pack made of Plastic, Paper, and Metallic (Aluminium). Once consumed the Milk containers can’t be recycled or easily decomposed. The more production of processed and packaged milk leads to loads of unrecyclable containers.

Findings also indicate that Endocrine Disruptors are present majorly in packaged foods and milk containers. The containers not only raise the alarm for humans but also for the environment.

You may never be convinced completely knowing the whereabouts of the original milk. You have no idea where are the farm and dairy farmers located. How is raw milk shipped and transported to the processing plants and companies? You may also never know about how the cows are being treated in terms of health and productivity. Most of the companies keep such details closed.

What to Expect in the future?

Risks of UHT processed milk seem to overshadow the advantages, to extend the life of this natural product it is a great method. Safety comes first while consuming the elementary part of your diet. Pasteurizing milk at moderate and ambient temperatures may solve the problem of its efficacy and activeness.

What are the Benefits of UHT Milk?

UHT Treated has already undergone processing that you don't require to do any work additionally. UHT Processed milk also kills the bacteria and non-vital organisms that can only be eliminated at a specific temperature. Dairy products are consumed every day on a massive scale, out of which UHT milk tops the consumption chart.

After undergoing the necessary heating process, UHT processed milk still remains on the vital side. Besides just altered taste, there are a few biological amplification UHT treated milk has. However, the same may not be supportively said about the re-processed UHT milk.

Some medical findings lay more light on the facts that are contradictory to UHT treated milk. Loss of digestive enzymes and proteins eventually depreciates milk's nutritional value and may also cause a bad bowel movement.

What is UH Treated Milk?

UHT Treated milk is the milk-type that is obtained after heating it at Ultra High Temperature for a fixed or extended time. This process is followed so as to make it safer for consumption and free from microbial or harmful elements. In USA and Canada, about 10 percent of all milk sold is UHT. Despite the market for UHT is growing rapidly, many nutritionists suggest keeping its consumption limited.