Pros and Cons of Abortion

The argument over whether or not to legalize abortion has long divided people worldwide. The pro-choice and pro-life camps are split into two factions, with pro-choice and anti-abortion being joined. Proponents of legal abortion hold that terminating a fetus is a safe medical procedure that saves lives. Abortion bans, on the other hand, put pregnant women who do not want abortions at risk and violate bodily autonomy, resulting in far-reaching impacts. According to religious sections of society, it's a condemned act. All these aspects bring the pros and cons of abortion, from personal choice to legal concerns.

Abortion is a medical procedure that is performed to terminate a pregnancy. It can be done either surgically or medically. There are many reasons why women choose to have abortions, but the most common reason is that they are not ready to become mothers. Some other reasons include financial instability, health concerns, and personal beliefs.

What are the Pros of Abortion?

There are both advantages and disadvantages to having an abortion. Some of the pros of abortion are as follows:

Abortion solves the problem of overpopulation which is one of the most serious problems facing the world today. By getting rid of unwanted pregnancies, abortion helps reduce the number of births yearly. This, in turn, helps ease pressure on resources like food, water, and shelter for families.

2. Prevention of Maternal Deaths is among many pros of abortion

According to a report, in 2020, the worldwide maternal mortality rate was 152 per 100,000 live births, up from 151 in 2019. So each year, many women lose their life due to complications during pregnancy and childbirth. Abortion can help prevent these deaths by allowing women to terminate their pregnancies before they reach a point where their health is at risk.

3. It Saves Children from Being Born into Poverty

When it comes to your body and your rights, this is where you may think of abortion as a self-choice to make. Abortion gives women more control over their lives by allowing them to choose when and if they want to become mothers. This can help women pursue their education and career goals without worrying about the added responsibility of raising a child.

5. It Allows Couples to Space out Their Children

Abortion allows couples to space out their children, which can have many benefits. Spacing children can give parents more time to bond with each child, and it can also help improve families' financial stability.

What are the cons of abortion?

Because of the low probability of unfavorable side effects and mortality, legal termination may have psychological consequences for some individuals. There are also debates that might make obtaining abortion services or determining what's best for one's health difficult. Here are some cons of abortion you must consider.

Many women who have abortions experience feelings of guilt and regret afterward. These feelings can be intense and may last for years. Some women may even develop post-traumatic stress disorder due to their abortion.

2. Physical Problems are associated with many cons of abortion

Abortion can cause a number of physical problems, including infection, bleeding, uterine perforation, and scarring. In rare cases, it can even lead to death.

3. It Can Lead to Emotional Breakdown

Abortion can also lead to a number of emotional problems, including depression, anxiety, and regret. Some women may even develop post-traumatic stress disorder due to their abortion. In the United States, around half of all pregnancies are unplanned, one reason for choosing a termination. However, the reasons for not wanting to continue a pregnancy differ. Social, financial, psychological, and familial concerns are just a few examples.

4. Cost of Medical procedures is among many cons of abortion

Abortion can be an emotional and financial burden for both the woman undergoing the procedure and her family. In some cases, it can even lead to financial ruin. You might be unable to pay for an abortion because of the costs involved. In the United States, a first-trimester abortion costs an average of $508 (between $75 and $25001). The cost of a second-trimester abortion is $1,195 on average. Later-term abortions may cost anywhere from $3,000 to thousands more.

Abortion is a controversial issue, and it is illegal in some countries. In the United States, abortion is a polarizing and contentious issue. When you are surrounded by the public debates between pro-choice and pro-life advocates, your personal decision on whether to have an abortion may be stressful. The question of when life begins and which rights should take precedence has sparked much debate. If you're having trouble with this huge decision, see your doctor, family member, close friend, or a trustworthy religious advisor for help.

6. Lack of Access to Abortion Services in Some Areas

There is a lack of access to abortion services in some areas, especially rural areas. This can make it difficult for women to get the care they need. This problem can be trouble anytime, and you can count it among the many cons of abortion, especially when you can't avail medical services timely.

Abortion, including therapeutic and legal procedures, is a safe and efficient procedure that protects you from the risk of illegal abortion. The danger of injury is minimal, but if it isn't treated promptly, it can be deadly. Consider all the pros and cons of abortion to assist you in making your decision. If you require assistance deciding on a course of action, talk with your doctor or other individuals you trust. 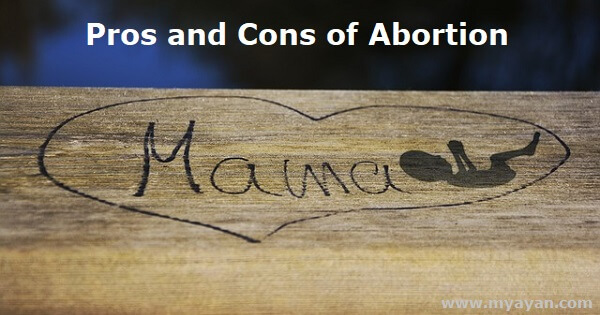 Abortion is the process of ending a pregnancy. It's also known as a termination of pregnancy. A medical or surgical procedure is used to terminate the pregnancy with medicines or surgery.

What are the disadvantages of medical abortion?

What are the side effects of abortion?

How many unsafe abortions happen each year?

Unsafe abortions are a major cause of illness and death among women across the world. It is estimated that around 25 million unsafe terminations occur every year.