Pros and Cons of Smog Towers 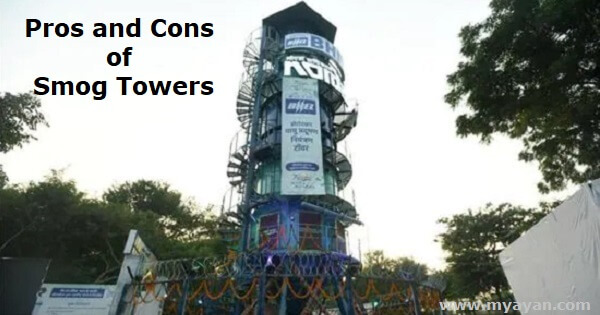 As the world struggles to curb air pollution, nations have tightened the measures to treat the polluted air and make it more liveable for people. With Smog Towers being installed in Chinese, Indian, and Polish cities, the air quality is projected to improve to provide a sense of safety for people. According to a study, around 3 million people succumb to air pollution globally every year. If not tackled, the number would double by 2050 itself. It’s now or never; can the building-like structures also known as Smog Towers help? It’s time to delve into the pros and cons of smog towers and find out the possible answers.

What is a smog tower and how does it work?

A smog tower works in a straightforward manner by sucking polluted air like a huge vacuum cleaner. Before bringing fresh air into the vent of the tower, the ion technology purifies it.

By forming a sphere of ions, all particles on the nanoscale are now positively charged, and they are drawn to the ground when the ground is negative.

This technology is safe and can be cleaned in one hour by ingesting 30,000 cubic meters of air and 30 watts of electricity, roughly the same as light bulbs.

In simpler words, it’s like a big machine that breathes impure air and exhales pure liveable air bubbles through its vents. Think of it as a robotic tree. And yes, a smog tower can provide clean air to people living within at least a 3 to 5 km radius.

What is Smog Towers Used for?

They should never be installed by someone inexperienced with these types of machines because they can catch fire if mishandled which would require costly maintenance that some may not be able to afford.

Smog towers also shouldn't ever be purchased unless you have a plan to maintain it or choose one that is already well known for being easy to fix.

What are the Pros of Smog Towers?

There are many pros of smog towers, the main one being that they reduce air pollution, and they work by pulling in polluted air and releasing clean air. The advantages don't stop there, however; have a look at them in detail below.

A smog tower runs on power to clear the atmosphere and produce more than 70% of clean air. This air gets into the atmosphere and can help people breathe living within a few km range around it. A few more structures like these and an entire city can drop the level of poor air quality. This is great news for those who have asthma, bronchitis, and other respiratory conditions.

Two possible benefits of smog towers include increased rainfall levels. This is due to all the water vapor in exhaust fumes and rain cloud creation through condensation on cold surfaces within the tower. This leads to more fresh air and healthier citizens.

Less dry weather conditions are one of the major pros of smog towers because they help promote clouds, leading to some serious storms. This later on down the line will bring much-needed precipitation with them. As long as there's no lightning involved, then it's just good luck.

These domes-like structures can be built depending on the population’s needs. If you want one for a shopping mall or a residential place, you can get it manufactured. As of now, there are small-sized smog towers built that can fit into a parking lot, and the one built in Delhi recently, which can cater to around 75,000 people.

While some smog towers can be quite expensive depending on how big they are, many of them actually cost less than building a new power plant. It's worth it, in the end, to save lives and create healthier conditions for everyone involved.

What are the Cons of Smog Towers?

After the benefits of these mammoth air purifying systems, come to their downsides. Here are some cons of smog towers to consider.

While some benefits include reduced costs with these types of towers, more energy input means higher electricity bills at the end of each month. Even if you are the city's mayor or a millionaire willing to invest in structures like these, the bigger you choose, the more you pay. This might not seem like a bad thing until you realize that there is no guarantee of balancing power consumption with a machine running 24/7.

Maintenance costs can be high as well with these types of towers and should only be installed by those who can afford the repairs. This is especially true if it's a large tower that requires more than just routine checks every now and then.

Smog towers are known to be highly unreliable and can break down at any given moment even if they've been maintained properly. This makes them a very bad choice for people who rely on these machines. A minor glitch can falter the system, forcing you to breathe in the atmosphere being surrounded by pollution.

Conclusion on the Pros and Cons of Smog Towers

Going natural and working on the root level is what is required right now. It’s better not to produce smog than to improve the air quality. Smog Towers are the last resort for humans where societies fail to curb pollution through natural methods such as planting trees or cutting down vehicular emissions. Even if mechanisms like these are involved in purifying the air, the Pros and Cons of Smog Towers must be considered in the long-term use.