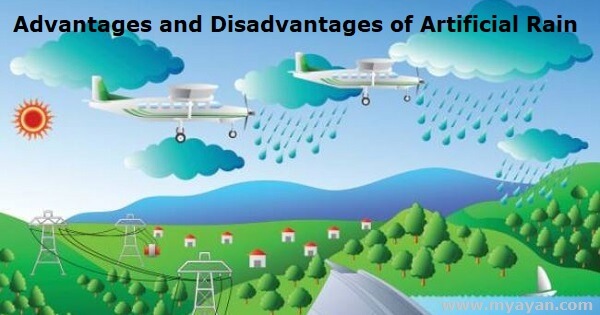 Artificial rain or Pluviculture is the method of rainmaking that dates back to 1891. Louis Gathmann suggested shooting liquid carbon dioxide into rain clouds to cause them to rain. However, the project named “the Royal Rainmaking Project” started in Thailand in the late 1950s. Now, Dubai has become the first nation to battle water problems on its soil by making it happen. While researchers evaluate many benefits of artificial rain, some believe it’s more dangerous playing with nature. The Advantages and Disadvantages of Artificial Rain inspect the pros and cons of cloud seeding.

Pluviculture is a method by which clouds are caused to rain or snow by cloud seeding. Vincent J. Schaefer was the one who invented this technique of seeding clouds in 1946. There are various techniques to induce precipitation in clouds which makes them heavy and causes rain. Usually, salt or dry ice is sprayed over the clouds, which helps to create artificial rain.

The applications of this method are numerous, and researchers are trying different methods to generate controlled weather phenomena. For example, different scientists have claimed to have generated techniques to alter rain timings from pseudoscientific rainmakers to cloud seeding.

Generally, the vapors present in the clouds are made to condense faster, thereby making rain at a specific place. Although it looks like a modern and helpful concept, the world should consider some pros and cons of pluviculture.

What are the Advantages of Artificial Rain?

There have been conspiracy theories about the government causing changes to weather for personal benefits and using it as a weapon to alter geographical conditions. It can be valid to some extent, but saving droughts and alter conditions for a better living doesn't make it look like a bad idea. So here is a list of few advantages of artificial rain.

The areas with very little rainfall or no rainfall can flourish with practical rain techniques. They can have natural water for irrigation, and this will reduce the temperature of these zones. Gulf countries had already started the project based on cloud seeding in 2010, which also became successful.

Experts say the population will rely more on artificial rain to overcome water shortage and drought situations in the desert areas of Abu Dhabi and Dubai.

Moreover, there are areas where clouds are condensed to a point to rain big ice particles. This causes substantial property losses in the American region, where artificial methods to facilitate rain before such condensation can prevent property and natural life losses. Cloud seeding not only produces rains but also can create snowfall. According to combined research from the University of Wyoming and the University of Colorado Boulder, cloud seeding can be used to create snowfall in the regions where none had existed before.

3. Dry Locations would have the most advantages of artificial rain

As per recent data, around 35% of the land in Australia receives so little rain, while in total, 70% of the mainland receives less than 500 mm of rainfall every year. As a result, most part is challenging to inhabit, making Australia the driest place on earth classified as arid or semi-arid.

The world is equipped with zones of different climatic conditions, and dry places suffer from water problems. However, with few artificial spots of rain a year, they can have better-living conditions than they now.

The new transport relies on passenger aircraft, and supplies are also moved with the help of these airplanes. These suffer from weather deviations, and at times the aviation becomes impossible due to safety concerns. This can be avoided by altering weather conditions in cases of emergency.

When it comes to agriculture, water is a vital resource and can help to increase yields in places dependent on natural rain. This can boost the economy and provide proper food to people throughout the globe instead of being dependent on agriculture-rich countries. As a result of artificial rain, countries can produce more through organic farming or other agricultural methods to meet the demand to the local population.

What are the Disadvantages of Artificial Rain?

Although it has proved to be a successful and valuable venture in research, its long-term effects could be disastrous. While it may sound beneficial for some locations, alterations in weather patterns can lead to global environmental impacts. Nature is complicated to understand, and controlling it entirely is impossible. Even if we can generate suitable techniques transporting water sounds like a better solution. Let us look at some disadvantages of causing artificial rain.

The technique takes an investment of millions of dollars to create few showers. The public doesn't pay for the expenses and benefits, but it boosts the economy overall. The government has to bear such costs if they choose to work in this sector of economic transformations. Even though the rainmaking project was successful in Abu Dhabi, the success had cost around $11 million.

Among many disadvantages of artificial rain is the only natural limitation, requirement of clouds. Unless there are clouds to shower with precipitation boosters, the technique cannot work. For days with a clear sky, the whole process fails as the artificial method cannot act as the natural cloud.

The toxic chemicals and substances sprayed can have harmful effects on the population and other natural resources. The seeding requires silver iodide or similar chemical substances, which, when leaked in the environment, cause negative impacts.

As we all know, the weather is a natural phenomenon, and altering them can lead to climate change in other areas. The clouds which are supposed to rain later at different places are artificially boosted with chemicals to rain early. This can cause water issues in other places and countries.

5. Effectiveness is one of the concerning disadvantages of Artificial Rain

The overall effects of these methods are still unknown and need better research. The techniques used have shown positive impacts, but the actual statistics about the usefulness of this process are yet to be discovered. With limited technology and small-scale applications, Pluviculture remains under study due to its limited benefits and unknown limitations.

Conclusion on Pros and cons of Artificial Rain

Although the technique qualifies to be a helpful method, the long-term effects can be destructive as changing weather patterns can change natural occurrences. This can even throw human existence into danger as nature allows humanity to exist, and living beings adapt to all the conditions.

While the world is trying to create living conditions and figure out other life forms on Mars, the experiments on Earth don't sound like a good idea. The whole world will have to suffer from climate changes, and migration and extinction of species will start. So before we move forward with making life easy, we have to rethink about making it longer. The pros and cons of artificial rain are worth considering before people invest in spacecraft and head to Mars.

How artificial rain is caused?

Silver Iodide is used to seed clouds and create artificial rain. Cloud seeding is the act of causing precipitation to fall by using substances like dry ice silver iodide. Cloud seeding is a manmade technique of generating moisture in the clouds to produce rain.

What are the advantages of artificial rain?

In the United States, cloud seeding is employed to enhance rainfall in drought-stricken regions, minimize the size of hailstones that develop in thunderstorms, and decrease fog levels around airports.

What are the effects of artificial rain?

The technique can cause ocean acidification, ozone layer depletion, and an increase in atmospheric carbon dioxide. In addition, silver is a heavy and hazardous metal that has detrimental effects on plants, people, and animals' health. Cloud seeding is also a costly procedure.

What are the negative effects of cloud seeding?

The problems and risks that may result from transitioning to a low-carbon world, such as unwanted ecological modifications, ozone depletion, continued ocean acidification, erratic rainfall patterns, rapid warming if seeding were to be halted abruptly, airplane effects, and more, are not necessarily severe enough to outweigh the need to keep temperatures down.