Advantages and Disadvantages of C Language 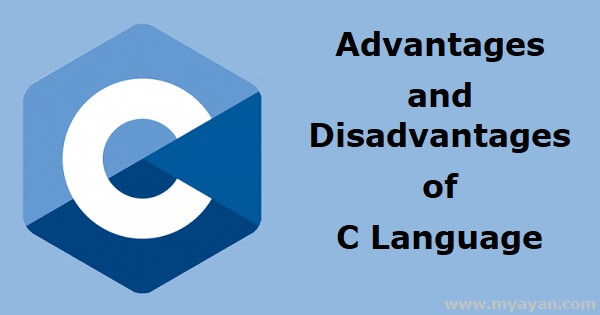 C programming language is easy to understand, which counts as one of its greatest known advantages. However, missing out on some advanced features like runtime execution and Object-oriented concepts put C language under limitations. Being one of the oldest programming languages, it’s still a powerful machine language that funds its uses and applications. Here are some Advantages and Disadvantages of C Language if you are currently working on it and need to know about its limitations and strengths.

What are the Advantages of C language?

1. C is the Building block for many other programming languages

2. Portability is one of the main advantages of C language

C is a very flexible programming language as its machine independence allows you to run your code on any machine without installing a separate runtime environment.

You can use the pre-existing code to make any change or just a few changes in the syntax to migrate your program to another. Due to its built-in functions, the C language is extended itself. You can add your functions to the C Standard Library to make code simpler and flexible.

Not only does C have a set of built-in functions, but it also comes with structures. Structured programs can help you reduce confusion as complex programs can be easily divided into smaller blocks or functions. This advantage of C language comes as a boon for the testing and maintenance of code.

What are the Disadvantages of C language?

The concerning Disadvantages of C language are the main reasons it’s still not studied in schools or institutes. Generally, students start by learning high-level programming languages rather than C.

1. Lack of OOP is one of the major disadvantages of C Language

Despite being a vast programming language, there are some limitations of C programming language. Lack of an Object-oriented approach is one of the main shortcomings of C language. You can add high-end functionality to the code invoking objects and use Inheritance, Polymorphism, Encapsulation, Abstraction, etc. C allows you to create programs using a procedural programming approach only.

Lack of run-time checking type has been a commonly discussed Limitation of C language. In the programs built using C language, the errors aren’t detected after each line of code. Instead, the compiler shows all the errors after writing the program. This can be a problem for you if you have developed very complex programs and compile them.

C does not have the concept of namespaces, unlike other high-level programming languages. A namespace combines a chain of commands and keywords to allow the reuse of names in different contexts. In addition, namespaces allow you use the same name for multiple variables. But due to lack of namespace, each variable had to be named separately and uniquely.

Exceptions are runtime errors that can come up anytime during the execution of a program. Therefore, exception handling is one of the most important features of any programming language. Imagine running a program with a DO while loop with 10 (positive) integer values, pass a negative value, and the program throws an exception.

Since C language lacks OOPs concepts, it doesn’t have constructor or destructor support. Both are member functions that are created as soon as an object of the class is created. The constructor and destructors help release the memory occupied by the objects as soon the program terminates.

Conclusion on Advantages and Disadvantages of C Language

Given its uses and applications in the current era, C language certainly has some benefits from a programming point of view. On the other hand, C language has clear disadvantages that drive an advanced-level programmer to switch to other platforms. You might have understood how powerful C language is in its process of implementation and execution and at the same time how it falls short on certain requirements.