In the United States, Voter ID laws have recently been a hot-button issue. Currently, most states require that voters show some form of identification when they go to the polls. These laws vary from state to state and can be complicated for voters to understand. Supporters of voter ID laws argue that requiring identification at the polls prevents fraud and ensures the integrity of elections. However, opponents say these laws disproportionately affect poorer people who may not have access to government-issued IDs or other documents needed for voting. In addition, research has shown very little evidence of voter fraud in the US, making it difficult to justify such restrictive measures.

More broadly, there are questions about whether Voter ID laws unfairly target certain groups of people. Research has shown that many states with Voter ID laws tend to have larger minority populations, raising concerns about voter suppression. Opponents see these laws as an attempt to discourage certain voters from participating in elections, while supporters say that they are necessary for protecting the integrity of elections.

An Overview of Voter ID Laws in the US

In order to understand whether Voter ID laws are appropriate, it’s important to consider their history in the United States. These laws first appeared in the early 2000s and have been steadily increasing since then; as of 2020, 38 states had some form of voter ID law on the books.

The majority of these laws require individuals to present specific forms of government-issued identification in order to cast their ballots, such as a driver’s license or passport. Other states may allow registered voters to sign an affidavit in lieu of presenting valid identification.

The impact of these laws is subject to debate; while some studies indicate that they have had little effect on voter turnout, others suggest that they disproportionately affect minority and low-income communities. There is evidence that individuals who do not possess the necessary government-issued ID are more likely to skip voting due to the difficulty of procuring one, particularly if they live far from a state office where they can receive it.

In addition, many argue that Voter ID laws put an undue burden on already marginalized groups by requiring them to navigate bureaucratic processes when casting their ballots.

How Common is Voter ID Fraud?

Despite the prevalence of Voter ID laws in the US, there is surprisingly little evidence that voter fraud is a major issue. According to one study, only 0.00000013% of ballots cast between 2000 and 2014 were fraudulent; this number does not justify using restrictive measures like Voter ID laws. Other research suggests that these laws are more likely to suppress legitimate votes than prevent fraudulent ones; for example, one study found that voters without an ID were three times more likely to have their ballot rejected due to incorrect information than those with an acceptable form of identification.

At the same time, supporters of Voter ID laws point out that other forms of voter fraud besides impersonation—such as vote buying or ballot stuffing—could potentially be prevented by requiring identification at the polls.

Numerous voter ID laws are de facto poll taxes, with 34 states mandating some form of identification for those who wish to vote and 7 requiring photo IDs. Unfortunately, the cost of obtaining these forms can be more than $100 in certain areas—putting this fundamental right out of reach for many citizens. Thus, it’s imperative to understand the pros and cons of voter ID laws in your state.

What are the Pros of Voter ID Laws?

Following is the list of some prominent benefits of voter ID laws and why the legislation needs to implement them.

1. It's Reliable form of Identification

One of the main advantages of voter ID laws is that it provides a reliable form of identification for those who wish to cast their ballots. In an era of heightened concerns about election security, this can be seen as a positive step towards ensuring the integrity of elections by eliminating the possibility of voter fraud or other forms of manipulation.

Voter ID laws also help reduce confusion during election day by ensuring that everyone must present the same identification form. This prevents problems such as people showing up with invalid forms or outdated documents, which can slow down voting lines and lead to longer wait times.

3. It increases Public Confidence in Elections

Stricter voter ID laws can increase public confidence in the election process. Making it more difficult for nefarious actors to manipulate the results helps reassure voters that their voices will be heard in the democratic process.

Voter ID laws also reduce the possibility of multiple voting since individuals can only vote once with valid identification. Multiple votes can be an issue in some communities, so having a way to track and prevent them is beneficial.

What are the Cons of Voter ID Laws?

Along with the benefits, there are some drawbacks related to voter ID laws. These include:

One of the primary criticisms of voter ID laws is that they disproportionately affect minority and low-income communities due to the cost associated with obtaining government-issued identification cards. In addition, individuals living in rural or underserved areas may not have access to a state office to obtain such documents, further limiting their ability to exercise their rights as citizens.

Another issue with voter ID laws is that they create unnecessary barriers to voting for some people, especially those who lack the resources or knowledge to obtain the proper identification. This can lead to confusion among voters and slow down election day processing times.

3. It Can Lead to Voter Suppression

There is also evidence that voter ID laws may lead to voter suppression—particularly among minority communities. Studies have found that these laws make it more difficult for certain groups of people to cast their ballots, thus potentially skewing election results in favor of one party.

4. It Can be Costly to Enforce

Finally, there are costs associated with enforcing voter ID laws. Since states must hire additional staff to verify IDs and purchase new machines for scanning documents, this can strain finances. Additionally, the time and resources spent on training election officials can further add to these costs.

Although voter ID laws appear to be a wise decision on paper, their existence is actually evidence that the law was trying to create an issue rather than ameliorate one. Taxpayer money has been extensively spent to educate citizens, prepare polling station employees, and provide identification materials - millions of dollars each year.

Having an identification requirement for certain transactions is beneficial in thwarting fraud and making it simpler for the public to acquire goods or services with age restrictions. By having proof of identity readily accessible, people can quickly and securely purchase what they need without a hassle.

While voter ID laws may offer an advantageous provision to protect the validity of our elections in the future, currently, their flaws outweigh any benefits. The issues this legislation aims to address are limited, and its repressive effects could be more harmful than helpful. 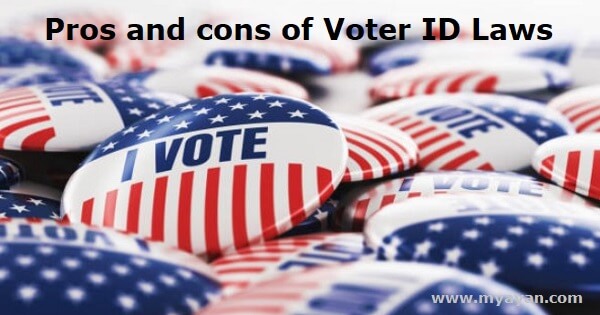 What is voter ID law?

A voter ID law is a law that requires citizens to present government-issued identification to vote. This form of identification is meant to ensure that only eligible voters are casting their ballots, thus reducing the possibility of fraud or other forms of manipulation.

What are the pros and cons of voter ID laws?

The pros of voter ID laws include increased security, reduced confusion, increased public confidence in elections, and fewer instances of multiple voting. The cons include disproportionate impacts on minority and low-income communities, unnecessary barriers for certain individuals, the potential for voter suppression, and costs associated with enforcement.

How can I ensure my voice is heard if a voter ID law impacts me?

You can contact your local or state election office to inquire about the requirements for obtaining a valid form of identification. Additionally, you may be able to apply for an absentee ballot or use early voting options if available. Finally, it is important to familiarize yourself with all state laws and regulations related to elections to know what steps you need to take to ensure that your vote counts on election day.

Many courts have found that voter ID laws are constitutional as long as they do not impose an undue burden on citizens who wish to exercise their rights as voters.