Advantages and Disadvantages of Watching Cartoons

The animation industry is growing faster than ever, all thanks to kids. is Masha and the Bear, Peter Pan, Cinderella, Mickey Mouse, Donald Duck, and Vinnie-The Pooh are some of the evergreen cartoon shows. As time and technology progressed, these favorite cartoon characters got replaced with many others like Shin Chan, Doraemon, and Pokemon. Watching Cartoons is every kid’s favorite thing to do. But how well do these characters shape kids’ perception and how negative these can impact them? It’s still a riddle that needs to be solved by parents. These Advantages and Disadvantages of Watching Cartoons evaluate further.

Turning on the TV and switching to kid’s favorite channels is what parents usually do to engage their kids. Even if there’s no TV, the fun continues on computers and smartphones. If you are looking for the best place to watch cartoons, the results will amaze you with so many options other than TV. Millions of Cartoon shows are available round the clock 24/7.

Cartoons can have both positive and negative effects on children's cognitive development and behavior. The following are possible advantages of watching cartoons that every parent expects.

1. Learning at the Earliest

There’s no doubt from where once-kids-now-adults had inculcated most of their creative thinking. One of the prominent positive effects of watching cartoons is the enhanced learning process at the early age. According to a Turkish Language and Grammar Teaching study, it was found that kids tend to learn writing and speaking easily through watching cartoons rather than textbooks.

Able to identify and differentiate colors, patterns, numbers, and shapes, kids can learn basic things interactively and enjoyably. Cartoon characters can help kids find their interests as early as in their second year.

Watching animation can help develop a child’s cognitive skills. Kids can develop logic and reasoning ability, hence improving their auditory and visual processing ability. The amount of time today’s kids spent in front of the television has increased vastly.

For the age group, 3-6 years who are pre-schoolers, there are numbers of cartoon series that promote educational and practical skills. The global research indicates that 85% of a child’s core brain structure is already complete in the early years.

3. Helps in the Language Development

There’s a cartoon channel for almost every language. Watching cartoons online rather than TV gets much-needed exposure to children to different languages. Regional TV channels show local cartoon shows only; however, kids can learn more than one language and develop their linguistic abilities through online cartoon shows.

Watching cartoons in native language can help them learn the language better. By watching different cartoons (non-native ones), kids can also boost their pronunciation and conversational skills.

Back in the days, cartoon shows like Duck Tales, Talespin, Allahdin, and Vinnie the Pooh had a storyline. These shows depicted the heroics of various characters fighting the bad guys. This is the most prominent reason why kids loved these characters and are inspired by their stories.

Watching cartoons also helps increase kids’ imagination and boost their morale to be positive, and build their character like their role models.

One of the greatest Advantages of Watching Cartoons is it lets everyone forget their worries for a while. How about turning your TV on after returning home on a stressful day? The most-loved rivalry of Tom & Jerry is still a favorite among millions of people today.

Likewise, children find cartoons entertaining and enjoyable that are hard to stop laughing at. Laughter is the best medicine for people of every age. Not only laughter cheers you up, but it also builds your confidence and positivity.

As parents have many reasons to let their kids watch their favorite cartoon shows, some are concerned about the disadvantages of Watching Cartoons. Here are various negative impacts of cartoons that can turn the good side bad.

Plenty of cartoons are available on the internet these days that promote violence and destruction. The biggest of the Disadvantages of Watching Cartoons online is that it encourages kids to grow violent in real life.

Also, kids believe that they would not feel any pain or hurt after falling or jumping accidentally, like animated characters.

Many cartoon characters use foul language rampantly; Shin Chan is a Chinese cartoon character that depicts rebellious nature, bad behavior, and the use of language that’s inappropriate from a parent’s viewpoint.

Many shows like Doraemon also display kids lying to their parents, teachers and bullying other kids. Kids can mimic these characters in real life, and that’s the biggest problem to tackle for parents.

TV and internet media is the easily accessible course to learn bad traits, therefore, kids more tend to behave as if it’s absolutely normal to be aggressive or violent.

If your kids spend more time than recommended, it's time to pay attention. Most of a kid's brain development happens in the initial two years of life. That's why it's so important for babies and toddlers to explore their environment and experience many sights, sounds, tastes, and textures. Kids learn to watch cartoons; they are susceptible to building an addiction to watching cartoons rather than interacting and playing with others.

The American Academy of Pediatrics (AAP) recommends limiting the amount of time that babies and toddlers spend in front of a TV screen. However, it's a mountainous task for parents to keep kids and toddlers away from Cartoon shows on TVs, tablets, computers, smartphones, and gaming systems in today's world.

Too much time spent in front of a TV screen can also lead to several health problems ranging from poor eyesight to a sedentary lifestyle.

How to take the right steps?

After identifying The Advantages and Disadvantages of Watching Cartoons, parents must ensure their kids get exposure to the real world equally. Watching cartoons together, limiting the screen time, selecting educational cartoon shows, and real-life interaction with kids are the best answers for worried parents. 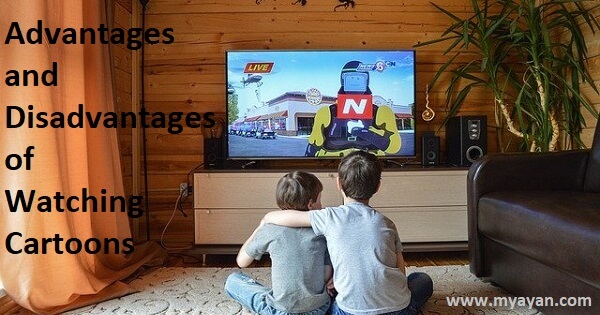 What is the disadvantage of watching cartoons?

There are many disadvantages of watching cartoons. However, the most troubling ones are that cartoons can turn the kids insensitive to others' pain and sorrow, making them feel discomfort from no elements of violence around them in real life and making them more prone to aggressive reactions to violent behavior.

Is watching cartoons bad for children?

According to psychologists, cartoons can have a negative impact on children. Kids who watch cartoons for 3-4 hours a day may be more likely to act out violently, and they may also start to lose touch with reality. Additionally, their behavior may become more negative.

How cartoons affect the brain?

Many studies reveal that watching cartoons may not be as good for young kids' brains as we thought. The researchers suspect that the brain gets overtaxed or tired from the fast-paced cartoons' stimulation leading to lower scores.

Do cartoons cause violence?

Some researchers believe that cartoons with high levels of violence can make children more aggressive. Young children tend to copy the negative behavior they see on television. Output aimed at children as young as seven, including several cartoons, had the highest levels of violence.