Pros and Cons of Cloud Seeding 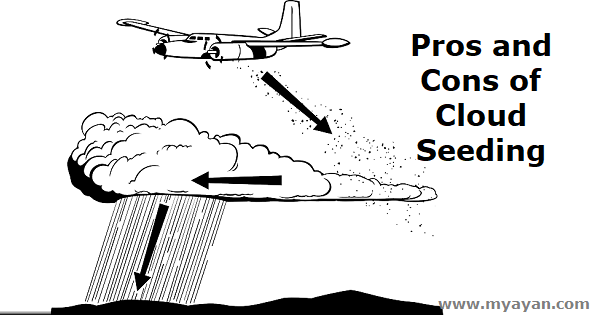 Cloud seeding amplifies the water in the air to create fog or precipitation by releasing chemicals into the environment. These chemicals, like Silver Iodide, Potassium Iodide, and dry ice, are usually found in regions with mountains. Propane has also been used because it can change from liquid to gas. It assists with cloud condensation and changes microphysical procedures inside the cloud. The main reason behind creating artificial rain is to fulfill water demands in dry and drought-affected areas. But as with everything related to technology, there are several pros and cons of Cloud seeding surfacing up.

What are the Pros of Cloud Seeding?

It is a good thing considering that sometimes people may need more rain while other times, less rain. This brings many to consider the positive side. Here are some pros of cloud seeding methods.

By increasing condensation, cloud seeding creates more precipitation. It is used in agricultural areas across the globe that experience droughts to help workers produce crops and allow groundwater ecosystems to recharge. This Cloud Seeding reduces famine risks by ensuring an adequate food supply.

2. Economic Boost is one of the main pros of Cloud Seeding

Good rainfall is essential for a solid agricultural harvest, supporting the local economy through increased food production and revenue. Cloud seeding can improve living standards in regions with poor or dry climates by creating more rain.

Droughts can often lead to an increased risk of wildfires, as dry conditions provide more fuel for fires to start and spread. By increasing precipitation levels and reducing drought conditions, cloud seeding can help to reduce the chances of wildfires starting and spreading.

Sometimes, cloud seeding creates snowfall for recreational purposes, such as skiing and snowboarding. This helps to bring economic benefits to areas that depend on winter tourism for revenue. Areas recreated for tourism give employment opportunities which is one of the main pros of cloud seeding.

One of the many pros of cloud seeding is that you can try different methods to create artificial rain. There are three primary methods of cloud seeding: static, dynamic, and hygroscopic. Static introductions of silver iodide into clouds to create a medium for moisture condensation. Dynamic Cloud Seeding is more compound than static as it enhances vertical air currents and increases cloud moisture production. Hygroscopic Cloud Seeding introduces salts to the base of clouds in blazes so that they can lead to high precipitation when water falls from the clouds above them.

What are the Cons of Cloud Seeding?

The problems are also significant when it comes to this technology. Here are some potential cons of cloud seeding.

1. Impact on the environment

Releasing chemicals into the environment can harm ecosystems and wildlife. There is also the risk that cloud seeding could alter local weather patterns unintendedly, leading to drought or other problems.

Cloud seeding is not always practical, and it cannot be easy to know if it has worked as intended. In some cases, cloud seeding may result in less precipitation than naturally occurring.

3. High Cost is among the major cons of cloud seeding

Cloud seeding can be a costly process, and it is often not covered by insurance. This means that if it works differently than intended, those who have invested in it may be unable to recoup their losses. The first cloud seeding project began in 2010 in UAE. The $11 million project successfully created rain storms in the Dubai and Abu Dhabi deserts. Despite the success, the cost must be considered seriously when running multiple projects.

In areas prone to flooding, cloud seeding could worsen the problem by increasing precipitation levels. This is something that needs to be considered before using this technology in any area. Technology is always controversial when using harmful chemicals to make it work.

As with any new technology, the long-term effects of cloud seeding have yet to be discovered. There is a potential for it to alter local weather patterns in ways that we do not yet understand, which could have negative consequences. These severe cons of cloud seeding are unprecedented.

When Did Cloud Seeding begin?

The cloud seeding method began in 1946 when scientists from the General Electric Research Laboratory discovered that silver iodide - an inorganic compound - and dry ice could improve the creation of ice crystals in clouds. In the past 60 years, experts have learned much more about this method, which has improved rain and snow processes.

Only some clouds produce rain. Even if they make rainwater, only a few clouds can create enough moisture for large raindrops to form. This may be because there aren’t enough ice particles within the cloud. There aren’t enough cloud droplets to combine and make raindrops without sufficient ice particles. Another reason certain rain clouds may fail to produce rain because some don’t last long enough for the required amount of cloud droplets to gather before dissipating again.

If done correctly, cloud seeding- artificially inducing precipitation- can increase moisture in the air and create rainwater. Silver iodide is used because its molecular structure is similar to ice crystals. By releasing silver iodide into the top tier of a growing cloud, it causes rapid crystal growth due to exposure to the moisture of the clouds.

Ice crystals quickly become large, heavy raindrops after forming. They will eventually fall through the cloud and to the ground. It only takes 1 gram of silver iodide to create 10 trillion artificial ice crystals.

Overall, there are both advantages and disadvantages of Cloud Seeding. It is crucial to weigh all sides before implementation to know what might work best for a specific area. Therefore, it is essential to consult with experts and local officials before moving forward with any cloud seeding project.

The three primary methods of cloud seeding are static, dynamic, and hygroscopic.

United States, China, India, Pakistan, Australia, Israel, and the United Arab Emirates have all employed cloud seeding in some capacity. The technology is typically used in areas prone to drought or dependent on winter tourism for revenue.

What are the dangers of cloud seeding?

Without significant engagement with potential risks and unintended consequences, cloud seeding is likely to cause maladaptation. Maladaptation occurs when people take action to avoid or reduce vulnerability to climate change, but this action adversely affects other systems, sectors, or social groups.

What does silver iodide do to the human body?

What US states use cloud seeding?

Recently, Idaho, Utah, Colorado, Wyoming, and California have upped their cloud seeding game to help with the current drought situation.

In the lab of surface scientist Irving Langmuir at General Electric, modern-day cloud seeding was launched in 1946. His colleagues Vincent Schaefer and Bernard Vonnegut discovered that silver iodide could transform supercooled water vapor into ice crystals at temperatures of –10 to –5 °C.