Advantages and Disadvantages of Co-ed Schools

Many parents find it difficult to scale the benefits of Coed schools over the single-sex education system. It’s literally a roller-coaster where the pros and cons of coed education turn out similar to its counterpart. If you are a parent fickling in a similar situation, you must know the Advantages and Disadvantages of Co-ed Schools. The environmental difference comes as the key concern when the question is about your kid’s education.

Co-ed schools are institutions that allow both boys and girls to attend classrooms. The American schooling system underwent big changes after the Bush Administration issued guidelines against single-sex education. Mixed or coed schools provide a variety of courses for both genders.

The concept of co-education schooling has been around for a long time. Some of the earliest schools in Europe were coed. But it wasn't until the 1990s when more and more schools began to adopt this education system.

Coed schools are becoming more and more common, but many orthodox parents still oppose coed schooling. The pros of coed schools far outweigh the cons, however. Here are just a few advantages and disadvantages of co-ed schools that parents need to evaluate.

What are the Advantages of Co-ed schools?

Advantages of co-ed Schools include having more opportunities for socialization, less gender stereotyping, and the ability to see the world from different perspectives. Kids learn how to interact with one another better because they have had experience being roommates or classmates from an early age which creates a sense of familiarity between the two genders to carry on into adulthood.

Co-ed schools provide more opportunities for children to develop their interpersonal skills. They learn how to work with people of different genders and backgrounds, which enables them to grow as individuals and members of society. This can help prevent any gender bias from developing in the future because they have been exposed earlier on in life.

2. Gender Equality is among the unique advantages of Co-ed schools Concept

Co-education can reduce the amount of gender discrimination in society overall. Since kids are trained alongside students of another gender, they will view individuals as people rather than objects based on their gender or sexual orientation.

Co-ed education is a challenge to the world based on Patriarchy. This is why co-ed schools have become more popular over time because most parents want to raise well-rounded individuals who do not discriminate against others for their gain.

3. Ability to see the world from a different perspective

Since co-ed schools have both genders attending, children can learn how to interact with others who may be vastly different from themselves. This helps them understand that everyone thinks differently, and they should respect these differences because it makes their community stronger.

This sense developed at an early age helps eliminate misunderstandings or stereotypes within society later in life when students get jobs and start families of their own.

4. Children are more likely to succeed at school

Schools based on Co-education provide a variety of advantages for children; they also offer their students the best chance of success when it comes to education. By training them in both genders from an early age in the same environment, these institutions help develop competitive nature among kids.

Studies have also shown that co-ed schools give their students the best chance at having a higher income when they get older. Since Students of all genders are trained in the same environment, their education is the same. When kids from all genders grow equally, they tend to be treated equally based on their knowledge and skills.

In a competitive world such as todays, companies prefer skills over anything hence paying the employees for their effort rather than having different gender.

What are the Disadvantages of Co-ed Schools?

Disadvantages of co-ed Schools can include increased mischievous activity among students, angry parents complaining about boys with girls in the locker room, and lack of privacy during classes that require group work. Some of the cons of co-ed schools are listed in brief below.

Since boys and girls are educated enough by the time they reach high school, some parents believe that co-educational schools may increase the likelihood of their kids having intercourse. This can be especially true for teenage kids who attend these co-ed institutions because they do not have to worry about sneaking around behind their backs if they go to the same classes together.

2. Privacy invasion is one of the common disadvantages of Co-ed schools

Co-ed schools are not separated by gender, which can be an uncomfortable situation for some students, especially adolescents. While changing clothes or using the bathroom, students' privacy is compromised due to the invasion of members of another gender. Such situations usually cause angry reactions from some parents questioning the entire mixed schooling system.

Another disadvantage to co-educational schools is the lack of individual attention for students. Since they are trained in both genders, there can be larger class sizes that do not allow them to receive one-on-one attention when needed. This can hurt their chances of success later on if they do not get enough help while growing up.

With co-ed schools, there is also the risk of disrupting other students' education. Boys and girls are both attend classes for all the subjects, whether lab or lectures. It can be distracting for some children who may not want to focus on academics because they are more attracted to members of another gender. Such distraction may cause their grades to drop which makes them less successful at school later on when applying for jobs.

Teenage students are like infants acting like adults and this age is when they undergo physical and emotional changes. Studying at a coed school means, they are likely to find a potential partner to establish a moral or emotional connection.

Many experts cite that mixed schooling is the root cause of early marriages where kids easily engage in physical relationships and eventually intercourse without considering the consequences. This age is when fairytales and love stories influence teenage kids the most. This is when immature decisions result in early pregnancy and marriages.

Conclusion on Pros and Cons of Co-ed Schools

Many advantages come with attending a mixed school, but parents should weigh all the co-ed school pros and cons before deciding. As a parent, you must also be careful about where your child will spend most of the days while growing up. From an early age, mixed schooling helps develop critical social skills while giving their students a greater chance for success in the future. On the contrary, the school management should ensure kids are well aware of what's ethical and moral from the education's viewpoint. 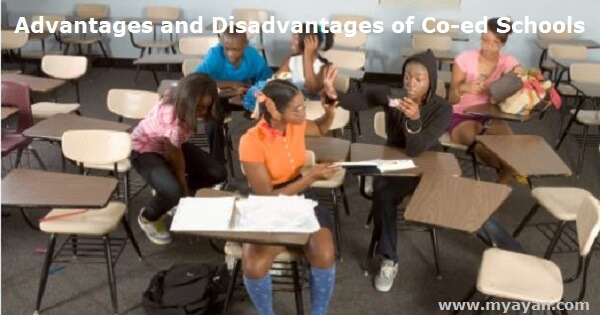 What are the advantages of coed schools?

Why co-ed schools are better?

Because students attend co-ed schools, they are exposed to the realities of life. They live in a healthy environment comprised of both males and females to prepare for the real world ahead of time. In addition, students' communication abilities improve as they communicate with everyone. These institutions also help establish mutual respect and self-esteem among pupils.

Why co-ed schools are better than single gender schools?

Coed schools assist students better preparing for post-secondary education and employment by offering them continual chances to collaborate. As a result, they learn to work together effectively, which they will be expected to do throughout their lives. As a result, there's plenty of preparation for university and beyond.

What are the main barriers of co-education?