Advantages and Disadvantages of Cloning Humans 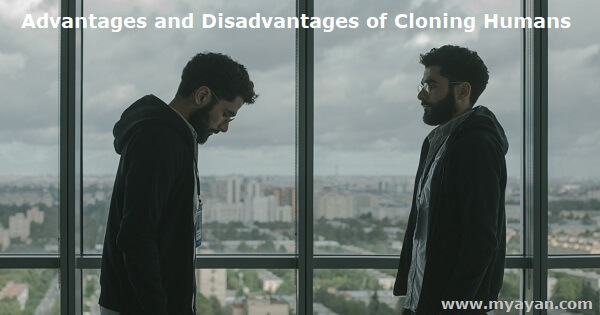 Movies like Resident Evil and The Prestige depict how Human Cloning can be helpful (Just for experimental purposes). The cloning of humans is a reasonably debatable topic for many scientists and Moralists. Once considered a miraculous achievement, now there are hostile reactions from the people worldwide against this technology. The advantages and disadvantages of cloning humans explore the scientific and ethical sides of this revolutionary method.

What are the Advantages of Cloning Humans?

Technology has gifted humankind with immense power to explore the possibilities to lead the generations ahead in time. Genetic Engineering is one of those gifts. The following advantages of cloning humans are considerable in terms of disease prevention and enhancement of features.

Human cloning is similar to cloning of animals (insert animal cloning link), where instead of the natural breeding process, genetic engineering comes into play. However, genetic illnesses remain a concerning issue among people as many disorders can turn fatal for patients.

The genetic features of a parent transfer to the offspring through natural breeding methods. However, this would not be the case with cloning. The healthy genes are taken to produce offspring in an artificial environment. Also, with cloning, there are no such risks as damage to DNA lines, defective or mutated genes.

2. Cloning is a Reliable Reproductive Technology

Twins exist. Naturally, this opens a window for scientists to support creating twins using technological methods. Having twin kids would be a dream of many parents who have lost their kids or can’t have babies due to infertility issues.

Human cloning is also favoured in terms of productivity and creativity. Those who have expertise in their fields would want to replicate their versions to double their efficiency.

3. Better Fertility is among the predicted advantages of cloning humans

Many couples are unable to conceive naturally; they have to spend thousands of dollars on consulting and getting the right treatments. Human cloning technology lets such parents have kids they want or expect with selective features and traits.

Through the cloning of humans, physicians could transfer the hereditary portrait of each parent, inject it into an embryo outside the mother’s body, and grow the fetus in a similar environment. There will also be zero risks to mothers as they don’t have to take utmost care as the fetus grow outside the womb.

4. It can cure some disorders

The technology based on Genetic Engineering could be the answer to hereditary disorders that even vaccinations can’t cure. Scientists predict that Cloning would cure genetic diseases such as Cystic Fibrosis or Thalassemia and make the babies immune to them in the future.

The human cloning process could help scientists and researchers to generate more efficient and immune offspring. Thus, cloning could not only help prevent incurable diseases but also enhance the capabilities of humans.

Parents could choose to select traits of their kids with more brainpower and physical strength; they would be anything they want to be while choosing their career path with an enhanced genetic profile.

What are the Disadvantages of Cloning Humans?

Besides the pros of cloning humans, there are raging concerns that have turned into political debates around the globe. The following Disadvantages of Cloning Humans are the major ones worth remembering.

The research and trials take more time and money on experimenting and creating a laboratory setting to produce a human clone. The technology would create more classism in the societies instead of equality.

Those with money could afford more advantages of cloning humans as compared to underprivileged sections of society. This would create a socio-economic divide among societies.

2. Human Cloning is against the law of nature

While scientists have their supportive theories for Human cloning, religious people would still oppose this technological method. Many still believe that technology would bring nothing but chaos by disturbing the very law of nature.

Some believe that genes modified to create smarter human beings would lead to less value for ordinary people with average ability and not have a place in society.

Many religious groups even condemn human cloning, considering it a sinful act and against the will of God. In addition, people with strong religious beliefs have previously opposed the process of cloning humans, feeling that it would result in man becoming the creator and the destroyer.

Religious factor comes into play whenever there are controversies raging sky high. Primarily the religious beliefs emanate from people‘s emotions rather than facts. With religious values being considered, people may take ages to decide whether to accept this technology or not.

With human cloning, those already in power would have more authority over the use of this technology. Organizations might misuse this marvel of genetic engineering for wars and destruction.

Since genes can be modified as per requirement, countries are more likely to invest in human cloning to increase the efficiency of soldiers to make them war-ready. However, some radical groups might also use human clones for unlawful interests and crime.

5. Cloning of humans will divide the Society

Humans have emotions and sentiments to express their feelings, be it pain or happiness. One of the disturbing disadvantages of cloning humans will be people won’t accept the replicates as one of their own. Clones not being treated as human beings can lead to social unrest and division.

The world still suffers the gap due to ethnicity, race, caste, color, and creed; the gap is expected to widen with another species of artificially produced humans. Such a social divide won’t bring peace but more harm to society.

Conclusion on Pros and Cons of Cloning Humans

Once conceptualized, now a reality; human cloning methods may get more active after the success of animals. Religious sentiments, feelings, and sensitivity are the leading factors that overlook the pros and cons of Cloning Humans. Understanding the possible outcomes is still complicated, but the potential risks of human cloning methods are worth comparing to the world's current situation.

What are the advantages of cloning humans?

Cloning may be used to develop organs for human beings, making their lives safer. We'll take a look at several of the possible benefits of cloning. Organ Replacement: If vital organs in the human body can be cloned, they might serve as backup systems for humans. Cloning body parts might be a lifesaver.

What are disadvantages of human cloning?

Furthermore, most researchers believe that human cloning will result in even higher failure rates. The clone's viability is jeopardized by a low success rate, as well as the risk of severe genetic abnormalities, cancer, and shortened life span.

What is the problem with human cloning?

How does human cloning affect society?

Cloning humans would allow families or societies to create people with outstanding genius, talent, or beauty based on their perfect genetic makeup.