Advantages and Disadvantages of Cough Syrup 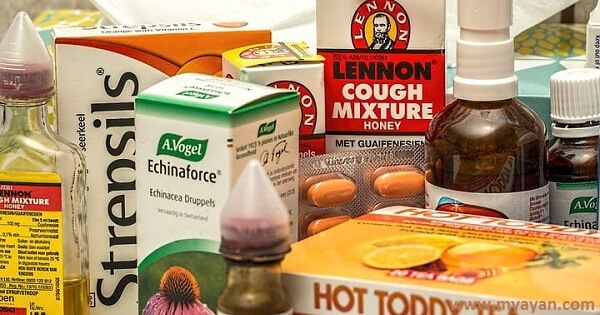 Cough syrup is widely used by people to treat various cough symptoms (40% of the world population). In the US alone, 10% of kids take cough syrup as a reliever, suppressant, or mucus thinner. Without concrete evidence as to why cough syrups are prescribed, patients buy this medicine either prescribed or OTC (Over the Counter). Some cough syrup side effects and benefits to let you decide whether a cough syrup is really effective or not.

Sold under different brand names, cough syrups are of the following types that are used to treat different cough symptoms. These types of cough syrup differ in the proportion of composition and combinations to get the expected results.

Mucolytic Syrup (Mucokinetics): These syrups are a class of drugs that clear mucus (Phlegm) from the airways, Trachea, Bronchi, and Lungs. Some Commonly Used Mucolytic Cough Syrups are Bromhexine, Ambroxol, and Carbocisteine.

You can see the following three elements ineffective cough syrup:

Dextromethorphan: This ingredient counters the brain signals that trigger cough reflexes to suppress coughing. DM-based cough syrup is not recommended to kids below 4 years of age. However, Dextromethorphan Cough Syrup seems effective in limiting cough in adults with viral upper respiratory infections.

Pain Relievers: Some cough syrups are based on Paracetamol / Acetaminophen and Ibuprofen to counter the flu symptoms and relieve body aches due to cough.

What are the Advantages of Cough Syrup?

A Dextromethorphan cough syrup affects brain receptors by restricting signals from triggering cough reflexes. A common benefit of such cough medicines is that you can sleep easily. DM and Pholcodine are two of the most commonly used cough syrup ingredients to treat patients with insomnia.

Codeine-based cough syrups are famous all around the world which makes it easily accessed drug for cough and other associated symptoms. Sold as over the counter cough medicine, many medical practitioners consider it as an effective and instant cure to cough.

The placebo effect is known as the magical pill. As there is no proven cure to cough and cold infections, medication of cough syrups combined with Placebo delivers effective results on a patient suffering from cold and cough-like symptoms. A wide range of cough suppressants are available these days, these medicines suppress brain functions (using numbing agents), enhance cough, as well as acts as bronchodilator syrups.

A cough syrup when swallowed starts working instantly to relieve discomfort arising from symptoms like aches and fever. Given that no medicine gives 100% surety to treat such disease, the placebo effect plays the rest of the part.

What are the Disadvantages of Cough Syrup?

As hundreds of research and thesis have compiled identical outcomes, all speak in terms of side effects of cough syrup overdose or misdirected use. Lack of solid supportive evidence also puts the use of cough medicines under the scanner. The following segment highlights the health risks of cough syrup under certain conditions.

A wide range of cough syrups come with 25% alcoholic content to induce sleepiness. Where this proportion is used as a relaxant for the brain it may also make you feel dizzy and convulsions. With each of the ingredients exhibiting side effects on your health, a cough medication such as Dextromethorphan may also adversely affect your gastrointestinal system.

Although side effects of cough syrup vary depending on the type of formulation, a mucolytic bronchodilator can cause bronchial spasms and rashes. A combined medication may also cause a sore throat, runny nose, white patches in mouth or lips.

Some rare but severe reactions of oral cough medicines are Tremors, swelling of face & lips, irregular heartbeat, and seizures. These problems may arise due to the prolonged use of cough expectorants and need to be reported to your healthcare professional.

In a study case published by Regional Medical Research Center, Assam (India) revealed that codeine syrup addiction was most prominent in the Indian states of Assam and Nagaland. A total of 181 and 395 addicts were screened for drug abuse out of which 48 and 49 individuals were reported to have affected by primary abuse of codeine-containing cough syrups. Over the counter availability of this medicine contributed to this addiction. A person addicted to cough syrup abuse exhibits physical psychiatric disorders.

Several studies prove that common cough medicine like codeine can turn a baby more dependent on opioids during pregnancy. Such medicine may also be passed to the infants through breast milk during the postpartum phases. Strong pieces of evidence have also been found against the use of cough syrups for kids below 12.

What cough syrup has alcohol in it?

Every antitussive or expectorant liquid contains alcohol which may differ based on a patient's age. The alcohol content is kept minimal in order to render its least side effects. Certain compositions of cough syrups are sold under brand names of Vicks, Donnatal, Geritol, Novahistine, Benadryl, Cheracol Plus, Robitussin, Sominex, Triaminic, Tylenol, and Dimetane. These oral medicines contain up to 25% of alcohol.

Which cough syrup is safe in pregnancy?

Plain Category-C oral medicines such as Vicks, DM-based Robitussin expectorants are preferred to use during pregnancy. Getting prior consultation from your medical expert is of grave importance during pregnancy to avoid any complications.

What is the side effect of cough syrup?

The side effects of cough syrup vary according to age, gender, medical condition. These can be common as well as severe. Common side effects of oral cough medicines are: Headache, Fever, Nausea, Vomiting, and Drowsiness.Severe Reactions include Tremors, Addiction, Irregular heartbeats, and seizures. In any of the cases, you should consult your pharmacist or medical service provider immediately.

Is there an alcohol free cough syrup for pregnancy?