Genetically Modified Organisms or GMOs are organisms said to improve the nutritional value of plant and animal-based foods. The organisms with manipulated or enhanced genetic features could be the food for the next generations. FDA regulates the GMOs for food and plant safety in the USA to ensure it’s safe for the population. However, there are raising concerns about the consumption of food among many regarding the pros and cons of GMOs. The Advantages and Disadvantages of Genetically Modified Organisms should be in your mind before the altered food organisms make it to your dining table.

What Is a GMO?

Genetically Modified Organisms are plants and animals that aren’t found naturally but can be created through genetic engineering. Their genetic structure can be altered in a way to enhance their characteristics and ramp up the production process.

In this process, scientists take genes from one plant species and move them into the cells of another plant to alter its genetic makeup.

What are the advantages of Genetically Modified Organisms?

Scientists are convinced that the genetic engineering of plants represents a technology with enormous potential for sustainably increasing food production. Also, developing countries are expected to have many advantages of genetically modified organisms in economic terms.

One of the major advantages of GMOs is that they will help increase the rate of crop production. The benefits of GMOs are palpable for developing nations; it’s predicted that nations with limited farmlands can grow their production rate immensely.

There will be no food shortage due to infestations, or drought conditions as the Genetically Modified Crops don’t depend on weather conditions. But, with more production, countries can battle foods shortage and famines, says a Hong Kong Study in 2017.

2. There are many Economic Advantages of Genetically Modified Organisms

A major reason why countries are investing in this technology is higher revenue. With a boost in productions, countries will be able to balance demand and supply. The consumer market will less likely have any food shortages.

As farmers have to spend less on crops safety, they can reap larger profits. Less dependency on land and water resources means the crops will be economically efficient, indicating a more thriving economy.

The major advantages of GMO crops are they are genetically engineered to survive adverse weather conditions and withstand external threats like an infestation. Genetically Modified Crops also need fewer resources to grow, such as Fertilizers, Water, and manures.

There will also not be excessive use of Pesticides and insecticides. This means there will be no wastage as farmers would be able to use what they have with little investment.

According to the WHO, altered plant genes make them less susceptible to diseases. The genetic modification of the crops means they can withstand external agents such as viruses and organisms that can infect the plants. The genetic makeup of plants will also help them boost crop effectiveness with a combination of insecticides.

5. There are many Health Benefits of GMO Foods

One of the primary benefits of GMO food is consumer safety. The main goals of Introducing Genetically Modified organisms to the Agriculture sector are to amplify the nutrient content in food.

Furthermore, GMOs are regulated by the Food and Drug Administration, USDA, and, EPA. This means consuming foods grown through genetic Modification is safer for everyone since it’s approved by the agencies.

What are the Disadvantages of Genetically Modified Organisms?

Although combining genes from different organisms is considered beneficial for crops, this latest incarnation of biotechnology is condemned by many. People firmly believe that GM crops pose a threat to human health and biodiversity. The following disadvantages of genetically modified organisms still add too many controversies.

Even if there are numerous benefits of GMO foods, they still have environmental issues. For example, genetically engineered crops would be more tolerant to insects and viruses, which means the bugs and viruses will also find a way to survive. This eventually encourages more insecticides and herbicides.

According to a study in July 2017, excessive use of insecticides and herbicides may lead to crop invasiveness. People also fear that this resistance may lead to a greater reliance on more pesticides, directly harming the surrounding environment.

2. GMOs may pose a threat to the eco-friendly organisms

There are the bad insects, and there are the good ones. The same goes for the weeds growing around the crops. Genetically modified foods are dangerous to some insects, as their genes could be deadly to them. This altercation is deadly for the insects such as butterflies and honeybees as they contribute to the ecological balance.

Both butterflies and honeybees collect pollens through their bodies and carry them to the plants. The pollination process helps fruits and vegetable plants to produce new seeds. Therefore, the altered genetic structure may also turn these insects away, which could be a hindrance to the natural process.

Genetically Modified Organisms also confers to transferring the existing mutation of a plant into another species. Transferring genes into an organism with a different set of proteins would add new, which could cause an allergic response in humans.

Mixing of proteins could pose more threats to people who are allergic to certain foods, according to the publication of Annals of Agriculture and Environmental Medicine in March 2013.

Every crop is grown on the ground, whether it is genetically modified or home-grown. They still need water and other essential resources to flourish. This means they also have to be pollinated naturally to produce the intended fruit.

Given that butterflies and bees are the key role players, they also tend to get exposed to the genetic modifications occurring in the crop. The seeds produced can be extended to other agricultural lands, thus contaminating them. There are many disadvantages of Genetically Modified Organisms for framers who follow traditional farming techniques.

According to the FDA’s Divisions of Food chemistry & Technology and Food Contaminants Chemistry, Genetic Engineering can lead to “undesirable alteration in the level of nutrients of GMOs”.

Such nutritional changes due to genetic mutations can escape the breeder’s attention unless genetically engineered plants are evaluated for the same. There can be severe cases of malnutrition if GMOs crops are produced without monitoring and inspections by the FDA.

Conclusion on Pros and cons of Genetically Modified Organisms

Besides the benefits, there are numerous concerns and risks of GMO crops one must consider. As far as consumers’ point of view goes, they are safe under the regulatory authorities like EPA, USDA, and FDA. It’s harmless to consume GMOs food as long as they go through multiple standards; however, if unnoticed, GMOs Risks are unprecedented. 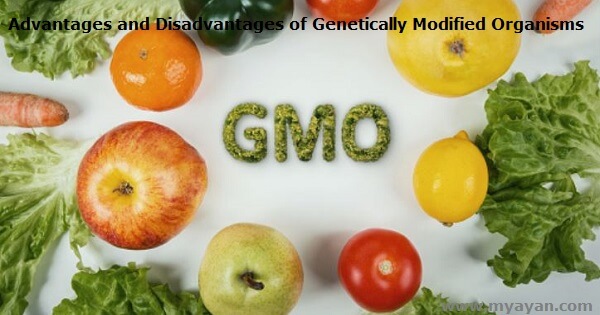 What are the advantages of genetically modified organisms?

Are GMOs safe to consume?

According to a study published by the National Academy of Sciences (NAS), GMO crops and non-GMO crops have the same potential for disease and negative health effects. GMO plants are as safe to consume as non-GMO ones, in other words.

What are the risks of GMOs?

Can GMOs harm your body?

There is no evidence that GMO food ingestion is harmful to human health. Furthermore, there have been no reports of disease linked to GM foods since they were first introduced over two decades ago. Therefore, there are no medical advantages to consuming GMOs above non-GMO meals as they exist today.