Advantages and Disadvantages of Dams

A large part of the global population still lacks the most basic amenity to survive, that’s clean water. On the other hand, people still suffer from a water mismanagement crisis. Many populated regions also suffer from flash floods and even draughts. Resultantly, human-made marvels such as Dams and reservoirs are constructed across streams and rivers to curb the issues mentioned above. What are the advantages and disadvantages of Dams? This quick research explores further.

What are the Advantages of Construction Dams?

Dams are built for many purposes, and sustainability is one of them. Improvement of health and life, increased food production, mitigating flood risks, supplying ample water resources to the draught-hit areas, and recreational purposes are some common benefits of building dams. A detailed description of the Advantages and Disadvantages of Dams is given below.

Dams are known for producing electricity (dams produce 103,800 megawatts of electricity alone in the US) with no additional requirement of natural fuel sources such as coal. Being eco-friendly, dams are used to generate electricity for both residential and commercial purposes. Once built, Dams can generate enough electricity to power up an entire village or city that too, without damaging the environment or leaving carbon footprints.

The downstream water is a renewable and natural source of energy stored in reservoirs and can be used to lighten up thousands of houses and industries around the area.

Dams are the prime source for recreational facilities, including economic, environmental, and social benefits. Many dams and reservoirs around the US offer opportunities for camping, boating, waterskiing, and tourism.

Such water sources also offer employment and a source of income to many local residents. Scrivener Dam is a recreation dam of Canberra, Australia, that offers such facilities to the government and families nearby.

Assisting farmlands, dams also mitigates risks of life loss and property damage. Most dams are equipped with technological protocols that captivate floodwaters and release the excess water under a steady stream through a river or divert the water for other creational uses.

For centuries, people have built dams to help prevent devastating floods. The reduction of the flood water also saves the crops and property from unprecedented damages. Preventing disasters such as floods can save the government authority balance a sustained economy.

The stored water can be used for multitudes of purposes, including commercial, municipal, and agricultural uses. The water storage built through dams can be useful in many ways; the reservoirs can be used for fisheries to improve aquatic life and balance up the ecosystem.

During summer, the reservoir can be used as a reliable source for farmland, and farmers can utilize their lands in every season without depending on rainwater or other water supply.

Navigating stored or excess water through Dams and locks to the drought-hit areas or water-scarce plains can boost land’s fertility and make it productive. Navigation of dam water through artificial streams and rivers benefits in a stable system of inland river transportation. Dam water reaching throughout a nation’s land keep the land’s value and upkeeps the resource-level.

A water supply system from Warragamba Dam in Australia replenishes the needs of more than 3.7 Million residents in Sydney and the lower Blue Mountains. Similarly, most freshwater is collected in reservoirs and dams, which can be used for drinking in nearby residential areas. Some cities even transport their freshwater from rivers and streams to other states through canals and waterways.

The freshwater from reservoirs is supplied for industrial purposes and strengthens the state’s economy. Not only freshwater from dams prevent people from getting affected by water-borne diseases and contamination.

On the flip side of the benefits of building dams, some disadvantages need consideration. Considering the risks of constructing dams on humans, wildlife, and the environment is worthwhile. After all, human-made marvels are always on the brink of collapse.

A dam may collapse due to human negligence or natural disasters, and without a backup plan, a minor failure can lead to a serious loss of humanity. Failure to adherence to guidelines and protocols can put the entire population at risk of flood.

Therefore, utmost caution needs to be taken while designing and constructing dams to avoid collapse and dam failures. Lack of safety protocols may result in the biggest disasters in human history, especially due to earthquakes. Much should be learned from the Vajont Dam disaster (1963), Italy, and the Banqiao Reservoir Dam tragedy (1975) in China.

Nearly 500 million people dislocated by dams from their motherlands in the past two centuries shed light on the biggest disadvantage of dams. The reservoirs formed behind dams flood the surrounding areas, which no longer can be used for any purpose, whether residential or farming.

A reservoir created at the back of the dams disrupts human activities, including destruction to existing wildlife habitats. A small disruption in humans' lifeline and surrounding vegetation can bring the entire ecosystem to a halt.

Marine life in flowing water can come to an end with the flow stopped due to water storage.

Sometimes the water is used in excess of evapotranspiration requirements. This water appears in the system as surface or groundwater. But it degrades in quality, mainly due to fertilizers and pesticides, besides minerals drawn from soils. Such waste has to be minimized.

6. The construction of a dam is a costly investment.

Designing and building a dam costs energy and resources, which escalates as per the project requirements. The higher the dam, the higher the cost. Major dams are as higher as 150 meters, with China and the US are the leading countries with the tallest and the most number of dams in the world.

The estimated cost incurred at building a large dam touches $30 billion; not only money but also the planning and construction could also take up to 8 to 10 years.

By building the world’s largest and tallest dams, nations have scripted history in terms of development and sustainability. It’s still unimaginable to think of what if there were no dams built in the past. Dams significantly nourish life and the ecosystem. However, another side of the facts stares right into the senses as the argument between the advantages and disadvantages of dams continues. 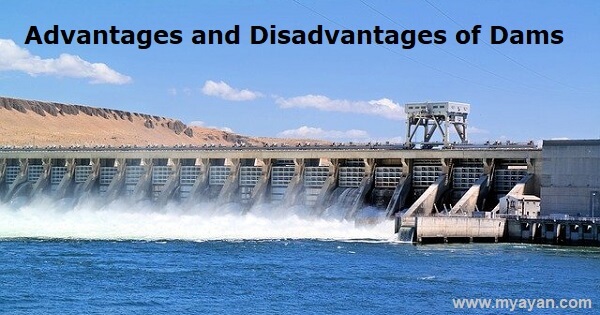 A dam is a human-made structure built on rivers and streams to control the water supply and conserve it. Through dams, the stored water is utilized for residential consumption, industrial and irrigational purposes.

What are the problems of dams?

Erosion of land is one of the first challenges with dams. Dams keep back the sediments that characterize a river's flow, depriving it of these materials. The water downstream erodes its channels and banks to compensate for the sediments. The lowering of the riverbed threatens vegetation and river fauna.

Why dams are bad for the environment?

Dams prevent nutrients from returning to ecosystems downstream. Many fish and other aquatic species have been lost due to the creation of big dams, as have birds in floodplains, significant losses of forest, wetlands, and arable land, coastal delta erosion, and many other unmitigable results.

What is one disadvantage of building dams?

When water rushes through a dam's internal turbines, it can form an ideal environment for sediment layers to be trapped and built, which can pollute the water and disrupt the ecosystem of the water environment.

How do dams affect agriculture?

Farmers can profit from a consistent year-round water flow away from dams. This leads to decreased irrigation and lower yields near the dams, which outweighs the downstream benefits.