Top Leaders of the World

Out of the planet full of 7.8 billion people, Forbes does it the right way, considering different grounds and identifies one out of every 100 million to be the best in terms of their Decisions and Actions.

Considering each selected one through the filter of how influential they are in regards to the business, politics, entertainment, newsworthiness, and impact. Ina more general form, they have to be evaluated on the different metrics of their own spheres.

Being the president of the most influential country, Mr. Obama had held the immense power which had been vested to bring about transformation. Being on the Best Leaders as considered by more than half of the Nation, this Personality had been TOP NOTCH Leader and Personality in USA. Marking the legacy of the lowest Unemployment rate to 5%, which equals to $17.8 trillion in 2008. He made some of the best Health Insurance Reforms in the country, the benefit of which may have been taking. Hitting the term for continued two times of being the President in the Country was really impactful and a long lasting glory.

Being the Powerful ruler in China for three years now, Xi

Jinping has been influential in his own way. He has been labeled to be the most powerful since Mao Zedong. Also, keeping in mind that ruling the country with largest population is never easy. Amidst of all this, the President holds at least 10 titles in the governance. Bringing the country’s economy in the elite state to even stand in comparison to the one of USA.

Vladimir Putin being one of the most influential person in Russia has so much impact on the people that they find him to be the one making Russia, the Supreme Power again. Putin’s support for the pro-Russian insurgency in Ukraine and military operation launch in support to Syria has led to the increase in the firmness of his spot in Russian Politics and future.

With ten years of tenure, Merkel has bagged so much in her kitty. Being an active member in the Refugee Crisis of Europe, the lady has been one of the most powerful even after so many glitches to face. She stands upright with Putin in terms like his campaign towards Ukraine. With her presence and influence, Germany stands above all in Europe displaying its power and potential on the grounds of Strong Economy and low unemployment rate.

Narender Modi, with the vote bank of majority, almost wiping out the opposition, held a very strong position on the Indian Political Ground. Five years, Modi has tried building his nation with all the reforms in terms to lower Pollution and enhance Employment Rate. The Prime Minister has been proudly speaking publically about his achievements related to the Agriculture reforms of the country. He has also achieved his goal of removing black money from the Indian Market by bringing in revolutions like DEMONETIZATION and GST implementation.

A catholic leader who bags more than 1 Billion followers behind him, is known for bringing reforms in the already vested rules of the Church. He is considered to be more open and accepting than any other POPE behind him. Endorsing more forgiving stance on Homosexuality, the POPE has his influence in bringing some revolutionizing changes within next 35 years.

Cameron, being elected for the second term of Prime Minister of UK, he has an influence on the people regarding his thoughts on allies and help. Being vocal about welfare for immigrants, gives him some spies around the country but meeting the Queen soon after winning the elections, Cameron has strengthened his position in the country.

Although, very new to the position, Francois Hollande has been quiet an Influence and buzz around the world because of his works in the fields of Fight Against ISIS, reforms regarding country’s social policy. He has also in his term of 12 months, has dealt with multiple terrorist attacks in Paris.

Hollande commands fifth-richest nation of the continent and is the most influential members of the EU.

Shinzo Abe, a prime minister in his second term crafts a bold plan for the future of his country. Bringing Japan with a storefront in terms of innovation of Silicon Valley, the prime minister controls his influence to a great extent. Abe visited US recently with the proposal for FACEBOOK CEO to invest in Japan’s Silicon Valley. Shinzo Abe, in his visit to the USA, also becomes the first Japanese

Rousseff being Brazil’s first female president leads one of the seventh largest economy in the world. Dilma has offered major reforms in removing extreme poverty by increasing the stipend for families struggling for income. Dilma does prove out to be a very important leader in the tenure of Brazil.

The world has a large amount of Personality who are influential and needs to be glorified but few qualify every year to get high listed in Forbes. 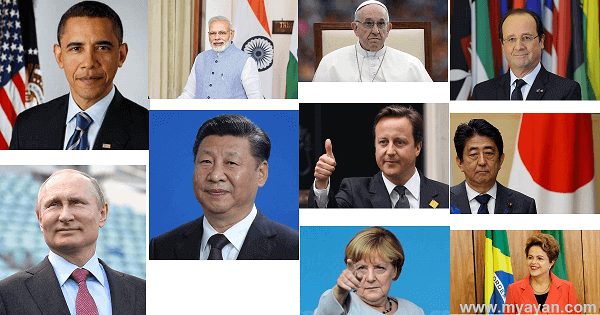 Who is the top 10 leaders in the world?

Who are the great leaders of today?

Who is the most powerful person in the world 2020?

The question itself is a riddle since the power of a person is judged based on regional and global levels. Unfortunately, many people fall under this category, namely, Vladimir Putin, Xi Jinping, Angela Merkel, Pope Francis, Emmanuel Macron, Narendra Modi, Theresa May, Warren Buffet, Tim Cook, and Elon Musk.

Who is powerful man in world?

The Russian President Vladimir Putin and the Chinese President are the two most powerful personalities globally.