Advantages and Disadvantages of Hydroponics 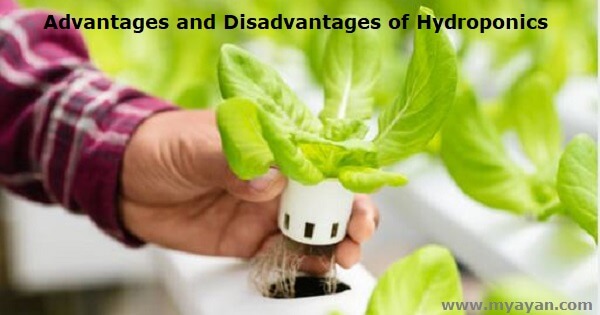 Hydroponics are a new trend of indoor or urban farming using just water and a medium to grow plants. The farming concept dates back to centuries ago when Babylon used to grow plants using hanging gardens. You may come across eye-catching floating gardens in China that add another beauty to their iconic structures. The system is considered the future of farming; there are some advantages and disadvantages of hydroponics.

The hydroponic system is a highly effective way to grow crops in urban areas with extreme climatic conditions. There are countless benefits of hydroponics compared to the traditional farming system. The technique makes less use of chemicals, boost production with higher nutrients level, and if suitable for growing organic food.

According to a report by Research and Markets, vertical farming is predicted to grow by $3 billion by 2024. It's evident enough to bring the economic side of hydroponics to discussion from a business viewpoint.

What are the Advantages of Hydroponics?

If you think a soil-free environment is all it takes to adapt to Hydroponics, it’s fair to consider many other advantages of Hydroponics. The hydroponic plants usually grow faster and better under a system controlled through mechanics. The following factors are why Hydroponics are the future of farming.

Growing plants on land require more water and soil-based nutrients, which are wasted in conventional agricultural practices. According to studies, over 70% of fresh water is used for agriculture globally.

On the contrary, Hydroponic systems are much more water-efficient as the plants are grown in a climate-controlled environment utilizing the exact amount of water as needed. This practice consumes ten times less water as compared to conventional agriculture.

The environment depends less on climatic conditions, so hydroponic farming is least affected by drought and water shortages. This farming system is most suitable for areas with extreme weather, resulting in higher crop yields.

The more controlled system means farmers can grow seasonal crops throughout the year, meeting the population's needs. In addition, the crops grown through the hydroponics system grow at up to 16 times higher density than vegetables grown in soil.

Crops like soybeans and corns take up most of the land space to grow. The harvest is mainly used for livestock and processed food. On the other hand, hydroponics systems emphasize cultivating fruits and vegetables which is suitable for human consumption.

Hydroponic plants grow in small spaces and don’t require land except for proper temperature, light, and balanced water conditions. As predicted, hydroponics would be possible to cultivate in space.

4. Pest Control is one of the major advantages of Hydroponics

No dependency on soil means no weeds will grow around the crop. This reduces farmers' dependency on herbicides and fertilizers, and proper nutrients are supplied to hydroponic plants.

Provided the system operates under controlled conditions, such as temperature and moistures specific to plants, the system isn’t welcoming for insects and pests. Also, the environment is easier to keep the unwanted intruders at bay as there is no use of soil.

Hydroponics system doesn’t necessarily depend on the use of fertilizers and chemicals to boost production. Since there is no wastage of resources in growing food hydroponically, much of the nutrients would be supplied to the plants without using additional chemicals.

Many believe that food grown through this system is as healthy as organic food. Farmers won’t have to invest in chemicals which is one of the most significant advantages of hydroponics system.

Do you know about Aquaponics?

What are the Disadvantages of Hydroponics?

Even though the farming system is gaining more attention in areas with extreme climates, hydroponics is not a perfect solution. From setup costs to external factors, there are a few disadvantages of hydroponics to consider beforehand. Farmers have yet to put their heads into some challenges to overcome.

The hydroponics system depends on technology as its use utilize specialized mechanism to regulate water circulation and temperature control. The farmers also have to depend on technology to maintain acidity and nutrient density.

Hydroponic crops are cultivated entirely under a climate-controlled environment which is created artificially. This method may be more successful in areas with little water or other natural resources but would be complex in areas with abundant resources.

2. Initial Costs are the concerning disadvantages of hydroponics

Even though the hydroponics market is expected to grow from $9 Billion to $16 Billion in the next five years, it’s hard for new farmers to adapt to this method due to setup costs.

Despite the growing market, the initial costs in hydroponic systems is relatively higher as farmers have to buy the setup equipment and pay for electricity bills. Nevertheless, the hydroponics system is accepted by the commercial sectors as a possible business opportunity.

The system operates on complex electrical and mechanical devices such as water tanks, pumps, plastic bottles, moisture controllers, and room heaters. Apart from the setup costs, farmers have to maintain the system frequently. A minor flaw in the mechanism could lead to system failure resulting in loss of crops. Power outage, dysfunctional pumps, and even lack of monitoring are major disadvantages of hydroponics systems.

Provided the system functions on various electrical and mechanical devices, it also requires hands-on knowledge to operate. The plants will not thrive in the environment unless you know how to operate the system.

Therefore, having sound knowledge of what you are handling is a must when putting much of your investment into the hydroponics system. Even a minor mistake can lead to adverse effects on crops which is one of the foreseeable limitations of hydroponics system.

5. Constant Power Supply is another limitation of hydroponics

A hydroponics system can only run when there is an uninterrupted power supply. Electricity is the backbone of the system to pump the water and regulate the climate artificially.

Hydroponic farming isn’t going to be a return on investment if you live in an area with power issues. Also, this farming method is going impact energy consumption and, eventually, electricity bills.

Summary of Pros and Cons of Hydroponics

The considerable advantages of hydroponic systems seem beneficial for commercial growers as they have proper technology in hand. But for small farmers, it’s a concept that is yet to be decided. However, understanding the environmental benefits and sustainability for the future, the pros and cons of hydroponics are equally balanced.

What are the negative impacts of hydroponics?

Another issue in some hydroponic systems is the development of harmful algae in the water. The algae will bloom and die fast in some situations, allowing it to accumulate on plant root systems and suffocating them, making the plants more vulnerable to diseases.

Is hydroponic better than organic?

Hydroponics does not require the use of soil, which means that no harm is done to the environment. Furthermore, because hydroponic fertilizers are purer than those used in organic farming, they do not residue cultivated fruit. As a result, more people may be fed, and fewer natural resources are consumed while maintaining high quality.

Your own home-grown hydroponics food will contain no hazardous pesticide chemicals. Hydroponics is a form of soilless farming that reduces the likelihood of pest attacks.

There is a misconception that hydroponic plants have a little flavor or are diluted, but this is no longer the case. The fact of the matter is that crops grown in a local hydroponic vertical farm are, in fact, tastier and safer than those farmed conventionally.