Advantages and Disadvantages of Hydrogen Energy

The automobile and Industrial sector use hydrogen Energy as an alternative fuel. Hydrogen is the first of 118 elements discovered so far. Hydrogen is the most occurring component taking up to 75% of the universe. Hydrogen Energy, as many believe, is the energy source for the future. Is this anomalous element worth it? The Advantages and disadvantages of hydrogen energy discover its benefits and contradictions.

Our universe comprises different natural elements, with Hydrogen, Nitrogen, and Oxygen present in abundance. Hydrogen is the first element (also the first in the Periodic table) that’s found in almost all plant matter and water. Hydrogen doesn’t exist alone but is combined with other elements in different forms such as water, gas, or even Biomass.

The main task is to separate the pure form of Hydrogen to put it to use. Thus, there are multiple processes followed to extract the Hydrogen in its purest form. Only then the extracted element can be used to generate electricity or as a fuel.

What are the Advantages of Hydrogen Energy?

Hydrogen can be produced for domestic and commercial purposes from resources like natural gas, coal, solar energy, wind energy, and biomass. In addition, hydrogen holds a promise of replacing non-renewable sources of energy as an efficient and clean alternative fuel.

Major Car Manufacturers Toyota, Hyundai, and Honda had already launched their Fuel Cell Electric Vehicles (FCEV) series in 2019. This could be a game-changing move towards sustainable development after Electric Cars.

About half of the population in the USA resides in areas where the levels of air pollution are high enough to negatively impact both public health and the environment. Conventional fuels like Gasoline and Diesel emits harmful gases into the atmosphere upon burning.

On the other hand, Hydrogen-powered fuel cell electric vehicles emit none of these harmful substances except for water (H2O) and warm air. Environmental & public health safety are major advantages of Hydrogen energy as it is a zero-emission source.

3. Domestic use is one of the expected Advantages of Hydrogen Energy

Hydrogen can be produced for a variety of purposes, such as supplying uninterrupted electricity to the population. It’s a clean, renewable alternative fuel extracted from waste, biomass, wind, solar, tidal, wave energy.

The boiler uses hydrogen Fuel cells for home heating for hot water while generating electricity for the home. The world can create sustainable energy efficiently and cost-effectively while reducing our dependence on foreign oil and other fossil fuels.

4. Hydrogen is renewable and clean

Hydrogen energy is a renewable source on which generations of the population can rely without fearing its depletion. It’s a rich energy source that is all around us in abundance and has no harmful emissions whatsoever.

Once Hydrogen has been used as an energy source, it can be converted to water which can further be used for recreational purposes. The by-products of Hydrogen do not cause damage to human health or natural surroundings, unlike nuclear energy or natural gas. That accounts for the most sought advantages of hydrogen energy.

Hydrogen is dense in energy that can generate energy in a much more efficient manner. Hydrogen is thrice as powerful as Fossil Fuels which means less Hydrogen generates the same amount of energy.

This is why hydrogen is used as fuel in spacecraft, aircraft, boats, cars, and vehicles. Also, given that it is environmentally friendly, it is a much safer alternative fuel than other fuel sources such as gasoline and coal.

What are the Disadvantages of Hydrogen Energy?

Apart from the advantages, cost, extraction, and transportation are among the most concerning disadvantages of Hydrogen Energy. The following are details cons of hydrogen energy which many believe are why hydrogen energy isn’t a suitable contender to replace the conventional energy sources.

Due to high energy content, Hydrogen gas is highly flammable and volatile, which needs dedicated storage space to avoid any hazards. Its explosive nature poses a threat to industrial and domestic use.

Hydrogen fuel is hazardous because of the low ignition temperature, and it tends to leak easily from tanks. In addition, it may cause explosions at filling stations or storage facilities if there is an error while handling it.

2. Productions Cost is one of the main Disadvantages of Hydrogen Energy

Pure hydrogen can be industrially derived, but it takes energy and cost to carry out the processes of extraction and shipping. Given that Hydrogen is derived from different compounds such as Methane, industries have to invest more in the infrastructure to set up the facilities for extraction only.

Also, both steam-methane reforming and electrolysis are very expensive processes that prevent many countries from investing in the mass production of Hydrogen Energy. This limitation is one of the common disadvantages of Hydrogen Energy as a future fuel.

Hydrogen is lighter than gasoline which is even more difficult to store and needs dedicated storage areas. In addition, hydrogen needs high compression and low temperature to be converted into liquid form and stored. Lack of storage facilities in bulk is one of the major limitations of Hydrogen Energy so far.

Although Hydrogen takes the first spot on the list of environment-friendly energy sources, its production does involve fossil fuels. This means the extraction of Hydrogen energy would lead to the emission of harmful compounds into the atmosphere directly or indirectly.

Conclusion on Advantages and disadvantages of hydrogen energy

Hydrogen energy is a renewable resource, but it still won’t easily replace other conventional fuel sources. Let’s not forget that extraction of Hydrogen from Oxygen and Hydrocarbons also require other forms of non-renewable energy such as fossil (coal, natural gas, and oil). It’s all about balancing these Advantages and disadvantages of hydrogen energy and not overly relying on fossil fuels while using Hydrogen energy cautiously and considerably. 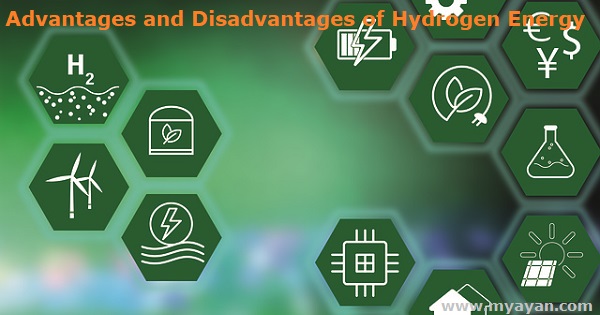 What are disadvantages of hydrogen?

Because hydrogen is a lighter gas than gasoline, storing and transporting it becomes difficult. To store it, we must first turn it into a liquid and keep it at a chilly temperature. In addition, the high amounts of pressure required to store hydrogen make shipping huge quantities of the stuff challenging.

What are advantages of hydrogen?

The use of hydrogen as an energy source for zero-carbon energy strategies is a second example, but it is important. Hydrogen fuel cells generate clean energy with no negative environmental impact because the byproducts are only heat and water.

What are the advantages of hydrogen energy?

Fuel cells are more environmentally friendly and energy-efficient than conventional combustion engines and power generators. In addition, hydrogen and fuel cells may be utilized in mobile settings to supply electricity to cars and mobile power banks.

Why hydrogen is a good energy source?

However, because hydrogen has a large energy content per unit of weight, it is utilized as rocket fuel and in fuel cells to generate electricity on some spacecraft.

Why hydrogen is important for our future energy needs?

Hydrogen is a fuel that can be burned in internal combustion engines or fuel cells, releasing almost no greenhouse gases when combusted with oxygen. Instead, the major emission is water vapor.