Advantages and Disadvantages of Political Parties

A political party is a group of people formed to win elections or gain power through voting or other forms of activism. A political party is led by a delegate or a leader chosen by the public or group members to voice the concerns in the governance. While democratic countries rely on political groups, it may not be the case with nations having one or multi-party systems. The following Advantages and Disadvantages of Political Parties assess their efficacy and usefulness from multiple aspects.

The benefits of Political Parties are many as they are the building blocks of every democracy. These structured formations are a way for voters to coalesce around shared beliefs and values, which is beneficial to society.

A political party system is a common form of government, and it can be classified as either democratic or autocratic. Political parties are formal, permanent organizations that exist to contest elections and hold elected office. Political parties typically espouse a certain ideology or set of principles.

What are the Advantages of Political Parties?

There are different Advantages of Political Parties depending on whether a nation is a single-party, two-party, or multi-party system. Given below are some benefits of forming political parties and why they are needed.

The main benefit of having Political Parties is to increase voter turnout because there is a greater incentive to vote. This means that more people are likely to turn up at the polls and have their voices heard, as they can now choose a deserving one from various parties with differing stances on multiple issues.

Every citizen wants to have the best form of government that heeds to core issues of the society. The voters have the power to decide who deserves to run a government.

Political Parties also ensure that only qualified and legitimate candidates will run for office or the government. This provides a much greater chance of competent, capable individuals being elected to take charge in government roles. The parties do their best to vet who they are putting forward as potential representatives to know what kind of person they're voting into power.

Not only do parties vet and select their own candidates, but they also ensure that additional people step up and throw their hats into the ring too. This can lead to a larger variety of choices within any given selection. In addition, there are now multiple individuals voters can choose from, rather than just one candidate on each ticket.

Political Parties allow candidates to come together to work on their campaigns. They can divide up the tasks so that each person has a role while also sharing resources such as advertising material or volunteers. This means that they're not working against one another but instead towards a common goal.

Parties encourage voters to be more loyal and faithful towards their candidates because they vote for the entire ticket instead of just one individual. But, unfortunately, this means that there is no room for change or switching sides; people are expected to vote in line with who they voted on the ballot paper.

What are the Disadvantages of Political Parties?

Along with Benefits, Political Parties also have some disadvantages, such as lack of authority, funds, or the right leadership to run the government. Also, the more complex a government is, the more difficult it is to manage a nation. The following cons of political parties elicit problems for both public and political workers.

One of the main disadvantages of political parties is Disenfranchisement, which means that some people feel like their vote doesn't count. This can be because they aren't interested in any of the candidates or platforms offered by the various parties and therefore choose not to participate. Disenfrachisement can also happen when voters are unhappy with their options and therefore do not vote at all.

Decreased voter turnout is also among the problematic disadvantages of political parties. Fewer people want to get involved with the process or participate; even if they do, their votes divide as more and more parties are made.

Fewer voters mean that politicians don't have as much of a mandate, making them less likely to risk acting upon policies they were elected on.

3. Corruption is one of the common disadvantages of Political Parties

Not every political group follows transparency while running governments. The former US president's involvement with the Watergate scandal left people questioning how corruption can seep into the greatest Political systems.

However, corruption can also result from Disadvantages of Political Parties because it encourages politicians to cut corners to win the next election. This means that they could bend or break the rules and take advantage of their position by making decisions that benefit themselves rather than society at large.

4. Encourage Disunity and divisiveness within the governing body

Political Parties can also lead to Disunity and Divisiveness, especially when it comes to winning or losing an election. When someone from one party loses out to a candidate from another, there is often some degree of personal animosity involved because they feel like their opponent cheated or made the race unfair in some way.

These problems can also happen within a political body when they're trying to govern because there is less collaboration between members of different parties.

Negative Campaigning and Mudslinging is another problem of political parties as they encourage the worst kinds of behaviour and personalities to come out during an election. The problems set a perfect example for politicians as crabs inside a bucket.

By putting opponents down, candidates can make themselves look better by comparison; this often leads to attack ads and negative messaging, which turn people away from politics altogether because it's seen as a dirty business.

Conclusion on the pros and cons of Political Parties

It is important to understand the Pros and Cons of Political Parties and how they might affect an election to make informed voting decisions. You should consider the positive outcomes of supporting the right political party first. Your responsibility as a voter or party member doubles as the next step is to choose an honest person to lead the campaigns and represent the society. 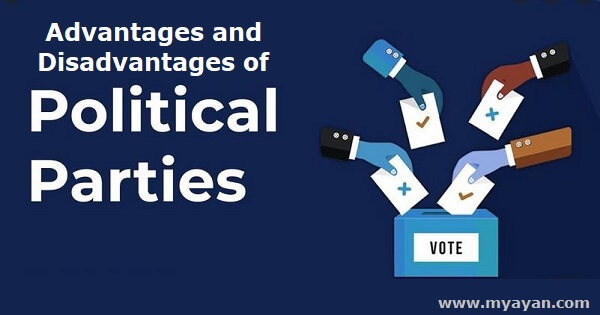 Political parties are groups that rally around an idea, typically with one or more goals in mind that will serve to further that cause. Their influence in a political system may be traced back to the early years of the French Revolution, when groups would align themselves with specific political figures in support of one another. The ideological consensus of the American electorate is reflected in the membership of the major parties because it is trying to get every part of society.

What are the main purposes of political parties?

A political party is a group that recruits candidates to run in a particular country's election. Parties are frequently linked by similar points of view on politics, and they may propose specific legislation or ideological goals.

What are the advantages of political competition?

1. A regular electoral competition gives incentives to political leaders and parties.
2. Political parties understand that if they focus on public issues, their popularity and chances of winning in future elections will improve.

Why did the political parties develop in the US?

Lawmakers took up their pens during the fight to ratify the federal Constitution of 1787. But, as the debate moved from creating a new federal government to the issue of how powerful that federal government would be, friction between them increased.