Advantages and Disadvantages of Fracking 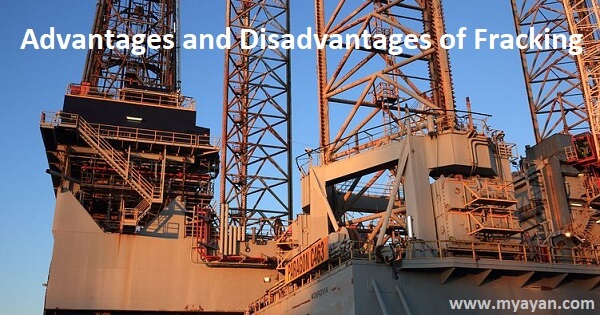 Developed economies have been practicing Fracking or hydraulic fracturing to fulfill energy needs cutting down the carbon footprint, encouraging sustainability. For the oil and gas industries, it's a more reliable and cheaper source of energy to last longer than coal. For some individuals, the Fracking Process poses risks to our lives.

How is Fracking useful for human survival, and what are the advantages and disadvantages of Fracking for nature and the surroundings? It's what is under study here. This information highlights the possible risks and scope of hydraulic fracturing.

Hydraulic Fracturing or Fracking process refers to the extraction method used to recover fossil fuel deposits from deep down the earth's surface. Geologists have known for years that substantial deposits of oil and gas are trapped in deep shale formations beneath the earth's crust.

The initial phase of the Fracking Process starts with injecting chemical-mixed water into the ground. The next stage involves injecting a mixture of water, sand, and chemicals at high pressure through a well.

Typically, the well is first drilled vertically into the ground and then horizontally. The water creates fractures (huge cracks) in the shale rock, and the sand lodges into the spaces to keep them open. This entire process allows the released gas to flow out of the rocks and travel to the surface.

What are the Advantages of Fracking?

Hydraulic fracturing has been encouraged to produce a significant portion of crude oil in the United States. The extraction and production of energy sources are faster and convenient, which eventually has accounted for about half of the total U.S. crude Oil production. Given below are some key benefits of Fracking from the standpoint of economy, industry, and sustainability.

Besides emitting hazardous gases upon combustion, coal mining is also one of the dangerous activities that endanger miners' lives. On the other hand, natural gas and other fossils release fewer residual particulates in the environment with fewer fatality rates during the extraction process. When compared with coal, the products obtained from hydraulic fracturing render less harmful contents into the open environment.

According to the U.S. Energy Information Association, Texas, Pennsylvania, Oklahoma, Louisiana, and Ohio have the highest account for the top five natural gas-producing states in USA.

Given that a country has shale gas reserves in abundance, such nations have to rely much less on foreign oil and gas imports. Not only this turn economic, but it also makes a country self-sufficient and independent.

Hydraulic fracturing and processing plant are established locally that means more job opportunities are available to local people. In the U.S., 1.7 million jobs are available in the Oil and Natural Gas industry, which is expected to double by 2035, reports the U.S. Chamber of Commerce.

Fracking jobs are also a wide window of opportunity for U.K.'s rural residents as the British regions have the most number of shale gas and oil deposits. The number of fracking jobs in the U.K. is estimated to touch 64,000 by 2032.

4. Products are Less Dangerous than Coal

Coal mining has potential health hazards for miners, such as black lung disease. The Death rates in coal miners are higher than that of number mishaps in the fracking process. Unlike coal mining, hydraulic fracturing involves the operation of injecting liquid chemicals mixed with water and sand. There is no chance a worker could be affected by dust particles.

Facts show that around 70k gallons of water is used in the Oil and gas industry to create pressure during the fracking process to recover crude oil. The figure may seem striking, but surprisingly, hydraulic fracturing does take the least amount of water as compared to other forms of energy production.

Studies established on the fracking process across the U.S. have shown water used to produce a unit of energy is less than half the amount in the coal extraction. Other forms of extraction, such as biofuel, require 7.40k gallons of water to produce the same amount of energy we receive from sources obtained through the fracking industry.

Some Major Disadvantages of Fracking Process

Given that the fuel industry injects unknown chemicals and drills the ground for a longer period, major demerits of fracking process can't be overlooked. Despite recovering cheaper and less polluting energy sources from the ground, some environmental concerns also rise to the surface.

Around 40% of methane gas in the U.S. comes out from fracking industry operations. Despite the efforts to capture methane leakage, many industries do not implement necessary protocols to contain methane leaks. The emissions from leaks and seepage are 30 times higher, as reported in EPA stats.

Similar limitations of the fracking industry have surfaced in Quebec Canada, where around 50% natural gas holes found to have methane leakage upon inspection. Methane is one of the most hazardous greenhouse gases which, when released, in the environment can be 30 times as dangerous as carbon dioxide.

Industries don't reveal much information about what toxic chemicals injected with water and sand to crush rocky grounds deep down the crust. With a higher possibility of methane leakage into the water bodies/groundwater, toxic chemicals can contaminate the groundwater and pose severe health risks to people in the vicinity of a borehole.

According to research documented by the National Academy of Sciences, high volume fracking elevates the risks of contaminating water in the locality. Another study conducted by NIH examined the methane content in the water in 68 wells near fracking locations. The properties closer to a fracking well are most vulnerable to water contamination.

3. Earthquakes can occur during and after fracking activities.

Fracturing deeper beneath the earth's surface can lead to noticeable tremors that can show up on the scientific scale pretty quickly. Small to mild earthquakes triggered by Fracking can range from 2.3 to 2.9 magnitude earthquake. USGS also suggests that a majority of earthquakes can arise from wastewater disposal, which is a part of the fracking process.

Due to the overwhelming post-fracking movement beneath the ground, the U.K. had suspended fracking activities for the long term. Earthquake like situations were also felt in the middle-western states of the USA in 1960 & 2000. The strongest of these tremors were recorded to be of a 3.0 magnitude.

As more and more crude oil extraction occurs in America, the number of reported tremors so far has plunged to 200 per year as high as 5.6 on the Richter Scale (Oklahoma 2016).

A constant noise emanating from the fracking sites is the second of the most concerning disadvantages of Fracking after water contamination. With an increase in extraction activities, the rise in the disturbing noise has also lead to trouble in residential areas.

Densely populated regions have to cope with the heavy noise of vehicular movements in and around the areas. It's too much to lose for a localite, given their life is already at risk due to water pollution and tremors.

The top 5 natural gas-producing states in the USA are also that states where property's value is most depreciated due to rampant activities. The presence of ailing and toxic elements in the land and water makes a piece of land infertile. Such an area is hardly usable for farming purposes.

Even though it's not farmland, using it for estate purposes is neither a good idea as the same threat looms around the grounds.

What are the negative effects of fracking?

A fracking operation in populated areas is dangerous not only for people but also, every living creature in the vicinity. Some of the threatening effects of hydraulic fracturing are water contamination, methane leakage, emission of toxic chemicals, and land degradation.

Why is fracking harmful to the environment?

What are the pros and cons of fracking?

Why is Fracking Important?

Many countries have crude oil and gas deposits in abundance. These natural sources of energy can be easily recovered through Hydraulic fracturing. Utilizing self-produced energy sources not only makes a nation independent but also, builds a stronger economy.