Pros and Cons of Libertarianism

Libertarianism is a political philosophy that upholds liberty as its principal objective. Advocates of libertarianism seek to maximize autonomy and political freedom, emphasizing individual rights while opposing most forms of government intervention. There are many different schools of thought within libertarianism, some of which have conflicting views on the state's role, private property, or capitalism. Nonetheless, all libertarians share a common commitment to individual rights and a skepticism of authority. This brings the discussion to considering different pros and cons of Libertarianism.

What are the main principles of libertarianism?

The main principles of libertarianism can be summarized as follows:

Individual Liberty: Libertarians believe that each person has the right to live their life as they see fit, so long as they do not infringe on the rights of others.

Private Property Rights: Libertarians believe that people have a right to ownership of their own bodies and the fruits of their labor. This includes the right to own property, both tangible and intangible.

Free Markets: Libertarians support free markets and oppose government intervention in the economy. They believe that voluntary exchange is the best way to allocate resources.

Peaceful Coexistence: Libertarians advocate a society based on peaceful cooperation rather than coercion or violence.

What are some criticisms of libertarianism?

What are the Pros of Libertarianism?

There are many pros of libertarianism for an individual. Some of them are as follows:

You have complete control over your life as long as you respect other people's rights. People have total freedom to make judgments and are not influenced by internal or external factors. Libertarianism promotes the individuality of individuals by enhancing their free will to make ethical decisions.

Because the government invests massively in law enforcement, the military, and the court system to fulfill its duty of safeguarding individuals from others' damage, libertarianism results in less violence and criminality.

Libertarianism allows for the use of force in self-defense; as a result, people are keen to avoid them. People can place their money into economic opportunities and ethical decision-making processes under the protection of law and order.

Libertarians support the production and provision of goods and services since they are dedicated to addressing social issues. The government does not limit individuals in their capacity to establish a firm, produce things, or offer services to society. Libertarians encourage the growth of products and services because they look for methods all the time.

Libertarians are generally fiscally conservative and socially liberal. They support laissez-faire capitalism, a system in which the government stays out of economic issues. As a result, there is more innovation and higher living standards. Libertarians also value civil freedoms, so they fight for freedom of speech and religion.

4. Low Taxes are among the main pros of Libertarianism

Lower taxes are levied because most financial resources are directed towards police, military, judicial, and national security spending. Because it was originally a political idea, libertarianism has been recognized for its advocates of low taxation. Libertarians argue that tax is theft, and the government does not have the right to seize people's money without their consent.

In terms of economic freedom, libertarians favor a low tax burden. Because of this idea, they want individuals and businesses to bear a minimal tax burden. While there are numerous other reasons to choose libertarianism, one of the most distinguishing features is its attitude on taxation.

Individuals respond to the idea of culpability for their behavior in three ways: cleaning up their act, raising awareness about issues that need addressing, and studying more about appropriate behaviors. In this way, it motivates people to take moral responsibility for their actions, and the decision to do the right thing is based entirely on one's ethics.

People's decisions are determined by what they choose to do with their free will and volition. Decisions are random, and moral responsibility lies solely with one's inner moral self-awareness. As a result, each person is accountable for their actions or inaction.

One of the considerable pros of libertarianism is that Individuals are more inclined to engage in ethical behavior in a society ruled by libertarianism because they are more empathetic. People are more aware of one another's social status and their own.

What are the Cons of Libertarianism?

Apart from the benefits, there are some cons of Libertarianism to consider. Some of them are:

Libertarianism, as a political theory, absolves the government of responsibility for the well-being of its citizens. This implies that if a person is unemployed, impoverished, or hungry, the government will stand by and watch them die rather than assist. In the long run, this concept tries to rid society of those not productive economically.

2. Making Your Own Decisions

One of the main cons of Libertarianism is that people are less likely to make poor judgments because they are unaffected by laws, morals, emotions, ideas, or experiences. Individuals' capacity to make ethical decisions on their own is unaffected by internal and external factors.

3. Liberty is not right for everyone

Being a realist and being able to perceive difficulties and confront them ethically is what liberty demands. Unfortunately, because everyone has the freedom to do anything they choose, some people may take advantage of this idea and extortion others by engaging in unethical behavior for their own selfish benefit, as they are not held accountable to anyone.

Individuals' moral obligation is not encouraged by free will since they make decisions that they perceive to be in their best interests. Many an individual's upbringing is determined by societal, parental, and guardian standards on what is right and wrong.

Even though those who taught them to have a biased view on what is morally or ethically correct may lead them to believe they are exercising free will when making moral judgments, everyone in society has their own perspective on what morality is based on their upbringing, and this will influence how they make decisions and take actions.

People's actions are not to be explained, according to libertarianism, because it is based on the idea that ethical choices are independent of prior chains of causation and consequence. As a result, libertarianism rules out personal responsibility because it assures that we do not make decisions due to previous causes.

6. Exorbitant Living Costs are among the main cons of Libertarianism

Libertarianism endorses government expenditure on police, the military, and the judiciary, implying that other government services such as airports, hospitals, schools, roads, and social services would be privately run. Residents would be required to pay for nearly all services because they are private.

Libertarians argue that the government should stay out of people’s lives as much as possible and that this hands-off approach will create more opportunity and prosperity for all. There are certainly pros to libertarianism, but there are also some cons to consider before deciding if it’s the right political philosophy for you. 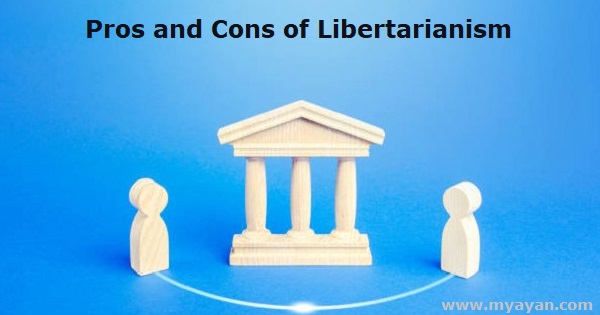 What issues do libertarians support?

Ending the prohibition of illicit drugs, calling for criminal justice reform, supporting same-sex marriage, abolishing capital punishment, and defending gun ownership rights are among its cultural policies. It is the third-largest political party in the United States according to voter registration as of 2021.

Are libertarians left or right?

What are the three objections by libertarians?

What are the pros of liberty?

The most important advantage of freedom, however, is truly personal. Societies may establish the groundwork for individuals to genuinely explore and achieve their greatest levels of personal, spiritual, and philosophical transcendence when they are based on liberty.