Top Universities in the UK: If you have dreamt of studying in the best universities of England, Wales, Northern Ireland, or Scotland, here are some of the Top Universities in UK for your preference. Graduating from these world-famous institutions is everybody’s dream. Preparing a gameplan for admission is essential, and so is your goal to make it come true. Many scholars strive to get a seat for admission to UK’s top colleges, but only a few are able to beat the odds.

Time not only favors the bold, but it also supports the meritorious one. If you have such caliber, just leave your worries at the door and start applying to where you rightly belong. Why are Universities in the UK preferred for higher education? The answer is simple and clear; These universities are world-famous since hopefuls have much better growth in the companies after graduating from these international Universities in the UK.

One of the many reasons why students from all around the world are eager to get admission in the UK -based universities is their credibility. Companies will always prefer a candidate from these institutions. British universities also best are known for quality education, and obtaining a degree from top schools in GBR makes you eligible for best career opportunities in the future.

For the past several years, British universities have been at the top of the chart. You should not miss out on a chance to be part of these UK's Best Universities so as to seek growth in the world's best institutions. It wouldn't be a surprise to see some globally recognized faculties teaching at these top-ranking universities in the UK countries.

Medieval period manuscripts are still preserved in the libraries of Cambridge University for study and research. University also has many museums and is primarily known for its excellence in teachings of mathematics.

The employment rate of Oxford's students is 95%, and all the placements are done within six months from graduating. The University of Oxford has 100 libraries serving education to the multi-cultural students and upbringing their skills.

Some of the notable alumni of oxfords are Indira Gandhi, Stephen Hawking, Hugh Grant and so on.

Established 1419, The University of St Andrews is the third oldest university of the UK and is located in Fife Scotland. The institution is also the most favourite one amongst Homes students, EU, and RUK students. This University also offers a range of part-time courses as well. St Andrews has the third-highest entry standard of undergraduate admission in the UK, after Oxford and Cambridge. The Guardian has ranked St Andrews third on the National Public Universities in the UK List with 97.9 points.

With a history of preserving cultural and moral values, the St Andrews serves with the motto, “Ever to excel or Ever to be the Best”.

Also famous as Lough University or Lboro University this public research university in UK is located in market town of Loughborough, Leicestershire, in the East Midlands of England. The institution came to existence in 1909 and grabs the fourth spot on the Top Universities in UK for the second successive year.

Lboro University also offers many awards and scholarships to the meritorious scholars to help them continue their ongoing research and studies further. Standing and serving quality education through the motto, “By Truth, Wisdom, and Labour,” rated five star for excellence by Quacquarelli Symonds through QS Star Scheme.

Loughborough was named University of the Year 2019 in The Times and Sunday Times University Good University Guide and best university in UK for student experience in the Times Higher Education Student Experience Survey for the fifth time since 2009.

Durham University was established in 1832 by an Act of Parliament and is located in Durham, England. This University gains the 5th spot on the list of Top Universities in UK. DU offers over 300 undergraduate and postgraduate programmes to Residents and non-RUK students. This university is a public research university which is also the third oldest university in England. At present, Durham University has 16 constituent colleges.

The university has also been awarded top ranks by League tables of the British Universities, Sunday Times, and The Times. Guardian University League places Durham University on the 5th Spot with 81.6 points.

Established in 1964, Lancaster University stands with the motto, "Truth Lies Open to All." This public research university is one of many Universities that came to existence in the 1960s. LU stands among the top ten universities in UK in all the three leagues also grabbing the 8th spot (79.3 points) on the Guardian Universities Guide.

Receiving a Gold rating in the Government's inaugural in 2017's Teaching Excellence Framework, the University was also awarded the University of the Year by The Times and Sunday Times Good University Guide in 2018. This institution has nine constituent colleges serving education in the academic departments of Social Sciences, Science & Technology, Health & Medicine, and Management.

Established in 1965, Warwick University is located on the outskirts of Coventry, England. This Public Research University currently has 25,615 students, 2,433 Academic staff, and 3,861 administrative staff. The University of Warwick is one of the top ten universities in England. To expand higher education, the government took the initiative of establishing this University. 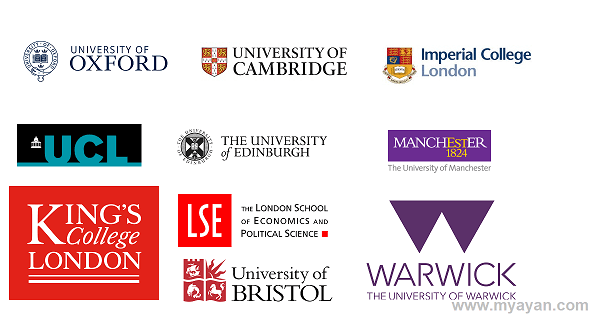 Which UK university has most international students?

There are many Universities in the UK that offer the best learning atmosphere to the foreign students along with the accommodation. Two commonly known institutions with the highest proportion of international undergraduates and postgraduates in the UK are: University College London (12,742 Students) and The University of Manchester (10,880 International Students).

Which is the oldest university in UK?

Which are less expensive Universities in UK for international students?

Are there free universities in UK?

University tuition fees cost up to £9,250 a year in England Universities which are considered the most expensive place to study in the UK. Free university education is available to students from Scotland in the local Universities.