Advantages and Disadvantages of Population 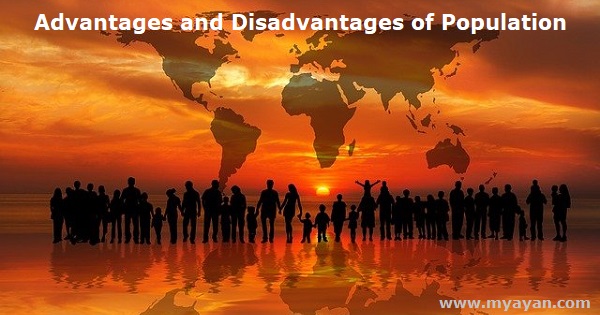 The current global population is around 7.5 billion, but the number has been drastically changing in recent years. In 1800, it was just under 1 billion people living on earth, and by 1900 about 1.6 billion people were living in the world. The population is constantly growing at an alarming rate; in some parts, the numbers are exploding. For some nations, population growth is needed to balance society, while for some, taking measures to restrict the figures is the need of the hour. These advantages and disadvantages of population assess the positives and the negatives.

What are the Advantages of Population?

There are currently over 7 billion people in the world. That's a lot of living, breathing, eating and procreating humans. The advantages to population include more minds to solve problems in companies that have plenty of customers.

With an increase in population size, there will be an increased need for goods and services, which leads to specialization. This means that some individuals focus on producing one good or service. However, based on the people's strengths and talents, each individual's efforts can combine into something incredible.

Specialization also allows nations to export and contribute to globalization. In contrast to local production, producers can export goods to places affected by natural disasters or man-made hazards.

The advantages of the population also lie in its ability to promote cultural and racial diversity. According to the latest report by BBC, Italy's population was recorded as 61 million in 2017 and is predicted to halve by the end of this century.

The World Bank stated that 23% of people in Italy were over the age of 65. The Italian government even launched a programme offering €800 to couples per birth to boost population growth. It's a clear indication of how the population can contribute to the development of a nation where most of its people are retired.

3. More jobs due to demand

With increased population size comes an increased need for goods and services, which leads to job creation because of production needs. Workers are required at every level from producing raw materials through various steps until final distribution during consumption.

More people are needed all along this process, so they might be required now even if specific skills were not previously desired. Many nations are investing in controlling falling birth rates to overcome the shortage of workers in the future.

4. Greater wealth is one of the major advantages of population

The advantages of the population also come in the form of increased production and commerce, which leads to an increase in revenue. If businesses have more customers, they can produce higher quantities for less cost per unit sold since there is a lower overhead due to economies of scale. Business on a massive scale also contributes to a nation’s GDP.

Studies have shown increased diversity that looked into the advantages of immigration as a vital source for innovation. New cultures added to the mix allow people from different backgrounds to think outside the box to address challenges.

This means that if the world is open-minded during these times instead of staying stagnant with the status quo, businesses will see a lot more innovation in the future.

What are the disadvantages of Population?

There are various disadvantages of population like pollution from all those extra people on this planet. Problems like pollution, poor sanitation, and spiking crime rate are common in undeveloped countries. Some of the striking factors related to population growth are detailed below.

Population increases the demand for resources. However, resources have limited supply, so this is a problem because if too many people consume these materials, they will run out and cause scarcity, leading to poverty.

There can be less housing available than jobs or food when there is overpopulation. In addition, due to rapid urbanization and industrialization, masses shift from rural to metro cities looking for employment.

When you have more people in need than the number of available goods, someone might not get what they want or deserve. People may also face food or space shortages to live in a city laden with excessive population.

Traffic issues are a common sight in densely populated cities. The disadvantages of population related to it being difficult for emergency services like fire trucks and ambulances to reach areas with heavy traffic.

Emergency services are needed when there's an accident or some other kind of natural disaster. People affected due to accidents may not be able to receive relief services in metro cities.

According to the World Health Organization, overpopulation can lead to more disease outbreaks and higher infection rates than in places with low population densities. With so many people living close together, it becomes much easier for germs and viruses to spread from person to person.

The Covid-19 pandemic better explains the situation where densely populated cities had higher death rates due to the spread of viral infection.

The effects of climate change will also be present due to increased greenhouse gas emissions which contribute heavily to global warming. As the population keeps growing, it has more of a negative impact on our environment.

Conclusion on pros and cons of population growth

The population is a complex topic with disadvantages and advantages. While population size can be an indicator of economic growth, it also impacts the environment in many ways, including water scarcity. The pros and cons pretty much give the idea of the benefits and issues about how large or small the population should be for a country.

What are the advantages of population?

What is disadvantage of population?

The population has a significant impact on the environment through the consumption of natural resources and waste production. These result in biodiversity loss, air and water pollution, and increased pressure on land. Land degradation is caused by excessive deforestation and overgrazing by the rapidly increasing population.

What are disadvantages of high population?

As the human population rises, more opportunities for resource exploitation will emerge. Environmental Degradation and pollutions will be the main issues to tackle.

What are advantages of population education?

According to the National Institute of Population Education, governments should plan for a better future to reduce the risk of population decline. It aids in creating legislation and programs that aid in resolving issues. It promotes the preservation of quality of life. Finally, it provides information on population sanitation, demographic concerns, and their needs.