Advantages and Disadvantages of Patriarchy

Patriarchy is the name given to the order of society where males are considered more privileged and more powerful to the opposite sex. The literal meaning of patriarchy is “the rule of the father.” The dominance of men ruling the political and social aspects of life is found in this social system, with men holding the right to inherit property and money. Most societies are generally patriarchal, and patriarchy has been considered a practice to exploit and oppress women. This system may be considered beneficial for males, but dire contradictions are surrounding it as a whole. The advantages and disadvantages of Patriarchy highlight both sides of it.

Women are contributing to every sphere of life, but they are still limited to giving birth and household chores at many places. The concept of women empowerment and Feminism is a debatable topic discussed at various political and social welfare programs and is always debatable for both men and women.

What are the Advantages of Patriarchy?

The origin of Patriarchy is considered to be a cycle of continuous events rather than being originating in a certain year or decade. From 3100 BC to 600 BC, the prominent changes in society came from males leading in all forms of social and political power. Feminism is a way to alter this approach and bring social justice for women. However, these are few benefits of Patriarchy and its effects on men and society.

When it comes to running the society in order, social and political leadership are required to attain peace, harmony, and control. Even to run a country, someone is needed to take control over a certain jurisdiction, which is made a bit easier by eliminating female participation.

In order to run a system smoothly and attain certain goals, each social and political group chooses certain leaders. These people help move the pack in the correct direction to achieve these goals. The alpha male who is considered the leader in patriarchy faces less objection due to well-defined rules.

3. Logical Approach is one of the notable advantages of Patriarchy

Any power that is attained by the strongest and biological factors proves men to be physically stronger than their female counterparts. So this is a logical approach of patriarchy in which men hold more power and importance than women.

With men holding power, they are given importance and respect in the family, which they may otherwise not receive. So they are busy generating resources for survival and providing food for others that they are physically less involved in the everyday social life of their own home.

When women are excluded from power and property, disputes remain between the male members of the family. This makes it a little convenient to solve different disputes between the heirs of the property and makes settlements easier.

What are the Disadvantages of Patriarchy?

Women are subjected to male dominance and suffer inequality in the dominant male society. They are not considered suitable for holding power and position in a patriarchal society. This leads to their exploitation by more powerful men and creates an unsafe environment for them. The ongoing debates and issues women face in different walks of life force intellectuals to consider the disadvantages of patriarchy.

While men enjoy privilege in this order, women are not given equal rights. They are considered less important as compared to men living even in the same house. The system flaws in giving equal opportunity to both sexes just because of a belief that men are superior to women.

The law of the jungle is that more powerful rules it, and when a concept based on unknown derivation divides the genders, the less powerful one suffers consequences. Women are considered cheap labor and are exploited both at work and home for the same amount of work.

3. Women have to learn to be independent

When opportunities flow equally for both genders, women can become more self-dependent and achieve positions generally offered to male counterparts of the society. This reduces their dependency on the male head of the family and creates healthier competition. But in most cases, women are overlooked by their male counterparts even they learn to advance or upskill themselves.

A patriarchal society is influenced by toxic masculinity, defined by a set of rules in which men have to compete to fit in order. While the woman is considered a person for household stuff, the men are subjected to work that can fulfill the family's needs as he is considered the chief of the family.

5. Insecure environment is one of the problematic disadvantages of Patriarchy

In a society where females hold less power, their exploitation and criminal offenses are more than other cultures. In addition, they are subjected to regular physical and mental abuses by the men of society.

Conclusion on pros and cons of patriarchy

The major effect of the patriarchy comes in the form of Gender inequality, where females have to struggle hard to achieve simpler life. Any attainment of position is refused to them irrespective of their skills and talents just for the sake of maintaining male dominance and power. However, Feminism neglects the consequences of female empowerment on males and the difficulties men face in a patriarchal society. Moreover, men are collectively considered exploiting part of society. Society in most parts of the world is running on this type of structure, and feminists are always found fighting for equal rights for both genders. 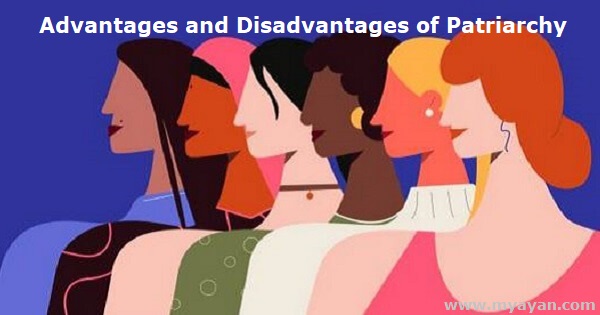 What are the advantages of patriarchy?

In a male-dominated culture, males are often immune to abuse and prejudice based on their gender.

What are the disadvantages of patriarchy system?

The desire for men to compete with each other is one of the most damaging aspects of traditional masculinity. Almost every aspect of many men's lives is affected by the need to consider themselves superior to others or people in general.

What is the impact of patriarchy?

What are examples of patriarchy?

Patriarchy is a society where men dominate and make all the rules, while women stay at home and look after the children. When the family name comes from the male family member, it's an example of patriarchy. A system in which fathers are heads of their families

What are the characteristics of patriarchy?

Patriarchy is a culture in which males have primary power and rule in roles of political leadership, moral authority, social privilege, and ownership. Some patriarchal nations are patrilineal, indicating that property and title are passed down the male line.