Advantages and Disadvantages of Friction

According to Newton’s first law of motion, a body tends to remain at rest or continue to move unless or until acted upon by an external force. Friction, if not in space, acts as a resistant force on a body in motion. Friction as a phenomenon has been on earth even before humans existed. This scientific process is what taught humans to create fire by rubbing sticks and stones. Without understanding the benefits of Friction, nothing would be possible in today’s world. It’s friction that helps you generate musical sounds, make daily life things work, and help humans in every walk of life. In day-to-day life, you can experience these Advantages and Disadvantages of Friction anytime.

What are the Laws of Friction?

Friction has the following laws:

Since Friction prevents the motion of an object or slows its motion down, the resistance to force can be both beneficial and disadvantageous. It can help you in many different aspects, but can also prove to be a hindrance in many other scenarios.

Why is Friction Necessary?

Friction is necessary and beneficial in many situations. From the moment you start your day, there are at least hundreds of things you can do with the help of friction. Brushing your teeth, cleaning the dishes, laundry, etc. Without this scientific phenomenon, nothing would ever be possible.

What are the Advantages of Friction?

From holding a pan in your hands to lighting a match stick, friction is involved in every process. Thus, the next time you wonder about the advantages of friction, think about the following.

Without Friction, setting a foot back or forth would be impossible in real life. Thanks to the resistance to force acting in the backward direction, we move forward while walking; Otherwise, we would fall each time while trying to walk. Try to walk on lubricated or icy surfaces where Friction is less, and you’ll know the basic advantage of Friction.

If there is no resistive force acting against us, we would never be able to hold the grounds properly. It happens between the shoes and the ground as you walk.

2. Frictions Allows us to Drive and Stop our Vehicle

No vehicle would be able to move back or forth if there was no role of friction. As Newton’s First Law states, you require a force to start or stop an object. Even if you had applied force, the vehicle would keep moving in the absence of friction.

The vehicle’s braking system depends majorly on friction without which, you’d have to suffer from serious accidental injuries as tires would have kept spinning.

3. Friction Prevents you from Slipping

Footwear companies manufacture shoes and slippers that provide much grip to help you walk without slipping. The scientific reason behind this is more friction. Static friction comes to action when an object rests against a surface or ground.

Static friction exerts a force against the soles of your shoes each time you put your feet on the uneven or slippery ground to keep you from falling. So, the next time you go hiking or trekking, make sure to choose the right pair of soles to avoid slipping.

Fluid friction comes into play only to air, water, and gases. This type of friction is also termed viscosity which exists in the air and other mediums. The wings of a plane hitting the air experience fluid friction with the help of which it steers into different directions.

The same principle applies to parachutes and gliders, where you get to decide where to lands because of viscosity.

There are fine lines on our hands that also cause friction between every surface we touch. So, without it, you wouldn’t be able to hold onto any object. Ultimately, carrying out thousands of everyday tasks by hands is one of the biggest advantages of friction.

What are the Disadvantages of Friction?

There’s no life possible without friction, but there can be serious trouble minimizing which we have to use lubricants and oils. These disadvantages of friction can be a nuisance in everyday situations.

1. Friction Leads to Wear and Tear

Any machine that moves or operates with parts experiences friction. A car’s engine, a bike’s braking system, or even a pencil eraser wears off due to friction. To enhance the machine’s longevity, you need to keep it lubricated to reduce friction and prevent runtime hazards.

As friction lets your vehicle stop, tires also wear off faster as often you apply brakes. The reduction of the lifetime of a machine is one of the biggest disadvantages of friction so far.

A machine is assembled using different parts; due to friction, these parts wear off and can lead to malfunction while working. Repair work takes both time and money. Not only friction reduces a machine’s efficiency but it makes the machine prone to malfunction.

If the minor parts of a machine aren’t taken care of timely, the non-lubricated parts may also heat up and cause plenty of noise.

Strong gusts of winds in Australia gulps hundreds of acres of land. The dry woods rubbing against each other ignite forest fires and displaces thousands of animals and humans every year.

This reason is why most industries are set up away from the population. Noise emanating from heavy machinery is usual to experience. In fact, if you press your car’s brakes unnecessarily, that would cause much noise that’s unbearable to your ears.

Try moving your sofa or almirah from one point to another; the heavier it is, the more difficult it is to deal with. Try walking through sand or snow; the same problem would trouble you again. Or drive through someplace with bad roads or less inflated tires; the result would be the same.

Not only friction causes you more trouble, but it also makes you consume more energy than usual in such scenarios, for any type of vehicle, whether a car, boat, or airplane, excess friction means added consumption of fuel and energy.

Both the Advantages and Disadvantages of Friction speak of some logical reasons, and both are backed up by real-time evidence. Rub your hands on a wintery morning, and you’ll feel cozy. But the results won’t be in your favor if you do the same with machines. That would certainly reduce its efficiency. As of now, scientific studies are underway to pave new technological breakthroughs and make friction friendlier. 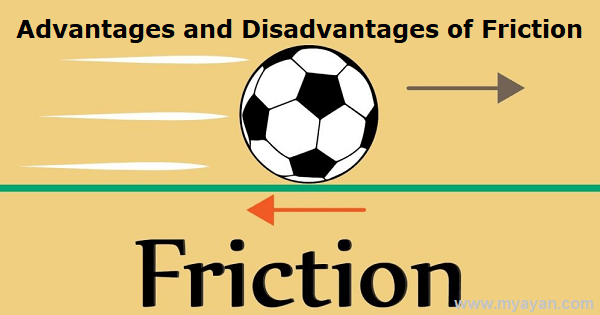 What are 5 disadvantages of friction?

1. Friction generates heat, which causes things to wear out. Friction makes work unpleasant.
2. Sparks, overheating, and machine failure are all caused by friction.
3. Friction slows down the object's speed.
4. Speed is reduced as a result of friction.
5. Friction may also cause tumbling objects to fall and create injuries.

What are 5 advantages of friction?

1. Walking, turning, and stopping are all aided by friction.
2. Friction aids in the wearing of cap, ring, and belt.
3. Friction enables energy to be transferred.
4. Making fire is made easier with friction.
5. Friction allows you to keep hold of things.

What are the 4 types of friction?

Friction is caused by a variety of motions and motions. There are four main types of friction. Static friction, sliding friction, rolling friction, and fluid friction are the four categories.

What are the types of Kinetic Friction

Kinetic friction is divided into two categories: sliding and rolling. Rolling resistance is less than that of sliding. This is why it's typically easier to roll a body than to slide one.