Pros and Cons of Oligarchy

The nations have now developed and have come a long from the past. The questions still remain the same for most people, what are the pros and cons of Oligarchy? But before that, you must understand how it works and affects today's society. An oligarchy is a form of government in which power is vested in the hands of a small number of people, usually those who are wealthy or have privileged positions. These individuals typically share similar backgrounds and ideologies and may even be related to one another. Oligarchies have existed since ancient times but remain an essential political form in many countries today.

How does Oligarchy Work?

In oligarchies, it is common for decision-making to be concentrated among a few influential individuals. This means that their policies are not subject to the same level of scrutiny as in more democratic forms of government. In addition, oligarchs often use their influence to create laws that favor themselves or their allies. This can include making it easier for wealthy individuals to access resources or ensuring their taxes are lower than those of other citizens.

Oligarchies, throughout history, have always depended on either the oppression or submission of the public to maintain power. The "iron laws of oligarchy" state that any organization will eventually become an oligarchy if it becomes successful enough to gain a competitive advantage. As these organizations become more complex, the elite group gains even more benefits of Oligarchy.

Oligarchs are only willing to associate with others who exhibit the same qualities. Oligarchs exist as a small, organized group compared to citizens being the large, unorganized majority. The average citizen often needs help accessing this elite group of individuals. Listed below are the pros and cons of Oligarchy that outline the potential benefits and issues with the system in the modern age.

What are the Pros of Oligarchy?

Nations like Russia, North Korea, and UAE has the Oligarchy system in place for a reason. The following are some of the prominent pros of oligarchy.

Since the power is consolidated among the elite few, decision-making is much faster in an oligarchy. Fewer people have to be consulted, and decisions can be made quickly without any potential for dissent or opposition.

The oligarchs' ruling society theoretically solves the citizens' problems, which from the citizens' perspective, means they are free to do as they please without worrying about government intervention.

People who don't have to worry about meeting their basic needs can focus on being creative and pursuing their passions. This creativity leads to innovative technologies and a better world for everyone.

The skilled masters can take on apprentices to teach them new techniques and pass down their talent to the next generation, just as the current group of rich and powerful people will find and develop the next group of wealthy elites.

3. Increased Efficiency is one of the main pros of Oligarchy

Oligarchy enables efficient solutions as the ruling class has access to resources that may not otherwise be available due to a lack of public funds or other factors. This gives them the upper hand in accessing resources and creating efficient solutions with fewer complications than in a democratic system.

Oligarchies tend to be more stable than democratic governments as there are fewer changes in leadership and less chance for civil unrest. This means that the public will know what to expect from their rulers, leading to greater certainty and order.

The main objective of an oligarchy is to keep things as they are. This provides security for the people living in that society because it offers stability and direction. Without this stability, a single leader would be more likely to take unnecessary risks that could jeopardize the status quo for everyone involved. Therefore, safety brought by a conservative approach is one of the major pros of oligarchy.

What are the Cons of Oligarchy?

Many nations still believe that oligarchy brings many evils to society and can negatively impact their system. Here are some of the considerable cons of Oligarchy.

The ruling oligarchs often use their power to create laws that favor themselves or their allies, making it easier for wealthy individuals to gain access to resources or have lower taxes than everyone else. This creates an unfair advantage for the few at the expense of the many, which can lead to an unequal distribution of wealth and increased poverty.

In an oligarchy, there is little representation from citizens in government decision-making processes. This means that the interests and needs of those not part of the elite are ignored mainly and unheard of because they have no real influence over policy decisions.

3. Abuse of Power is among the severe cons of Oligarchy

Oligarchs often abuse their power and position to get what they want. This can lead to corruption, nepotism, and other unethical behavior that harm those not part of the ruling elite.

In oligarchies, citizens are limited in their choices as the few in power decide most matters without consulting the people or considering other opinions. This limits individual freedom and prevents them from pursuing their own interests or ambitions without first appealing to the ruling class for approval. Such limits end up with many cons of Oligarchy.

5. Tyranny of The Rich

Wealthy individuals in an oligarchy can use their financial resources to control political decisions, leading to less accountability and transparency in government. This can lead to the tyranny of the rich, where those with money can manipulate political decisions and policies in their favor.

This means that even if citizens were to rise up and attempt to overthrow the ruling class, they would likely be unable to do so due to a lack of financial resources. This further pushes them into poverty and despair as their voices go unheard. These considerable cons of oligarchy push the entire economy of a nation with most of the population living in.

Final thoughts on the Pros and cons of Oligarchy

Oligarchy is an established form of government worldwide, but it is not without its weaknesses. The elite members who rule tend to abuse their power, while ordinary citizens are left out of decision-making processes and have limited choices available. Thus, Oligarchy may not be the ideal system for countries striving for greater civil liberties, justice, and equality. Although Oligarchy does provide some benefits, such as stability and efficient solutions, the disadvantages of this type of government should be considered. Citizens need to be aware of these drawbacks to make informed decisions about their political system and strive for a fairer society. 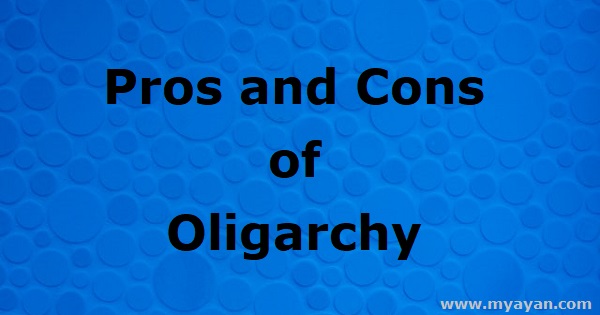 What are some pros and cons of an oligarchy?

The pros of an oligarchy include stability and efficient solutions due to fewer changes in leadership. On the other hand, some cons are lack of representation for citizens, unfair advantages for those in power, and abuse of energy which can lead to corruption or tyranny of the rich.

What are some alternatives to an oligarchy?

Some alternatives to an oligarchy are democracy, monarchy, and socialism. In Democracy, citizens have a say in policy decisions through voting for representatives. Monarchy is where a king or queen, holds power. In socialism resources and production processes are owned by everyone rather than just the elite few.

Is Oligarchy good for modern society?

It depends on the context. In countries where civil liberties are essential, Oligarchy may not be the best system as it could lead to oppression or tyranny of the rich. Thus, it is necessary to consider all of the factors before deciding if an oligarchy is suitable for any particular society. Ultimately, it is up to citizens to determine what type of government will work best for them.

Which nations have an oligarchy system?

Oligarchy systems can be found in many countries around the world. Examples include Russia, Saudi Arabia, China, and the United Arab Emirates. Other nations that have had oligarchies in the past include Ancient Greece and Rome.