Advantages and Disadvantages of Communism

A government based on Communism is a form of government that’s often categorized under socialism. This approach focuses on equalizing a society so that every person receives payment based on their needs and skills. There are many good reasons why society needs Communism. However, the same can have negative impacts on people. These Advantages and Disadvantages of Communism contribute to the pros and cons commonly faced.

There are many different types of governments worldwide, and each has its own methods to run. Communism is such a government structure where all of the property is publicly owned.

Nobody is wealthier than anyone else and has equal holds. Like every other government form, there are good things and bad things associated with Communism. Some of the advantages and disadvantages of Communism are listed below.

What are the Advantages of Communism for Society?

When this communist system is in effect, it is the government or state that controls the ownership instead of the people. The social, political, philosophical, and economic ideologies that form the structure have the following advantages for society.

1. Equal Rights- One of the Common Advantages of Communism

In an economy based on Capitalism, some people are wealthy while some aren’t. If you were born into a wealthy family, you are going to inherit that wealth. ON the other hand, this isn’t the case in a communist country. Successors don’t inherit wealth from their families, and there is no existing wealth.

Any ordinary person can have an extraordinary life based on their skills and knowledge. Everyone starts their life with equal opportunities and earns wealth based on their acquired skills.

2. Employment Opportunities for Everyone

Unemployment and low wages are relatively common in a capitalist economy. However, this is not the case in a communist economy. Having equal rights, everyone is expected to contribute to society using their knowledge, which means everyone has a job and can earn as per the acquired skill set.

Also, if you can’t have a job, you must support your community somehow. Each person plays an equal role in the production or manufacturing process, so there are reduced issues with hierarchy and classism in every industry.

Educated people understand how to read and write and eventually participate in activities that contribute to community growth. People have the right to read and write if they want to serve the community in their way. The first things communism focuses on are vocational and basic educational opportunities to the general public.

Being educated, disregarding your financial or family background, is one of the essential requisites for building a better structure. People can only be productive if they hold the practical skills to fit into the workplace. If you hire an average person for a specific job, the results may not be productive.

Having a communist system means there are no minorities in this structure because everyone is given equal treatment. The powers of the state include every family, each lifestyle, and all religions irrespective of their living standard or wealth over time. Rather than focusing on the differences between people, communism requires everyone to think of each person as an overall part of the whole.

Gender equality is one of the notable Advantages of Communism. In a capitalist country such as the US, gender inequality still exists even if written in the law. In recent years women have been raining the issue of being paid less for the same amount of work as their counterparts.

Surprisingly, women have been fighting for their rights, and some are still fighting in the present. In contrast to a capitalist society, communist societies support the emancipation of women. Women are neither treated unequally nor are they exploited. As the state governments decide the law, women hold equal space in society.

What are the Disadvantages of Communism?

Many believe that socialism is not the problem is, especially for the classless sections of the society. However, there are some disadvantages of Communism that may push you to consider the downsides of it.

1. The government owns everything

The most significant disadvantage of communism is it controls businesses, property, and production units. This control of the state eliminates the free market from domestic society. Absence of laws to regulate supply and demand to set the prices for consumers to pay further causes setbacks for individual business planners.

The private business might lose the feedback they need to understand the requirements for a production cycle and the possible upgrades. Because of this limitation, the government usually produces one item in surplus and too little of another. The surpluses and shortages can be strong enough to lead to a government disruption.

2. No freedom of speech

The government may interpret public needs entirely differently, which may not be in the best interests of society in a communist system. This infers that the idea of individual freedoms is incompatible with the methods being practiced by the government. The only reason behind it is to keep the powerful ones in the rule.

The incompatibility between the government and general people is the main reason to implement restrictions on civil rights such as individual expressions, journalistic thought, and other challenges to the government's actions. According to Karl Marx, censorship is a tool that the powerful always use to oppress the powerless.

3. Citizens can be misled by the Government

Ordinary people are isolated from the outside world in a communist country. The ruling government has much control over what to show to people instead of the actual happenings. This means citizens are only told what the government wants them to know.

Any contact from the outer world is either restricted or scrutinized by the government first. Many people in a communist country believe what their government is telling them is true, but they hear it all at the government’s convenience.

The money a citizen is allowed to earn is limited in a communist economy. There are specific caps that make it harder for people to grow and be innovative. Since the government controls the businesses, people are also aware that they have to reach a specific level to meet their community needs. They are also familiar with the fact that they will not get compensation for extra work.

There is no reason for citizens to do more than the bare minimum with the salary caps in place. There is nothing much you can save from your salary in a communist country as once your salary from your employment is reached, anything that is left goes back into the government for redistribution.

5. Poverty is one of the predominant disadvantages of Communism

A government based on communism emphasizes uplifting the society, but actually, it pushes most people to poverty. It’s easy for the leaders to manipulate the government structure. Even a single corrupt leader can decide which class of people to be more successful and more well off than others.

Such leaders can change the laws just, which will help their people reap maximum benefits leaving the rest of the country marginalized. No doubt that communism meets a person’s needs, but many people are only given the bare amenities.

Advantages and Disadvantages of Communism: Conclusion

There can be many Advantages and Disadvantages of Communism and which outweighs which depends only on the country’s government and leadership. The only limitation of Communism is that there are no protections when someone in power abuses their authority. However, there might be many individual benefits of Communism that some people can find in certain situations. 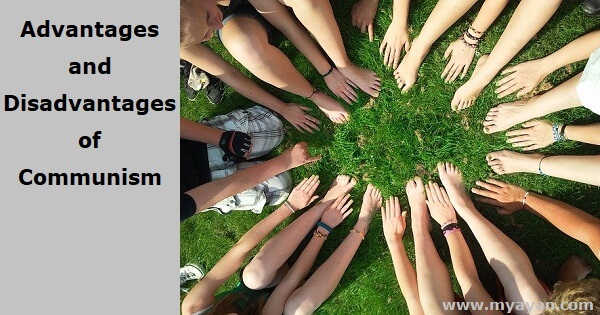 What are some advantages of communism?

What are the disadvantages of communism?

1. The government owns all the businesses and properties.
2. No freedom of speech.
3. Large diversification of populations.

What are the effects of communism?

Not only did the horrors of communism not end with mass murder, but they also included such pernicious practices as political repression, infringements of freedom and speech, loss of property rights, and the criminalization of routine economic activity.

What are the main goals of communism?

Communism is a political, economic, and social ideology and movement that strives to create a communist society, which is defined as a socio-economic system based on common ownership of the means of production and no social classes.