Advantages and Disadvantages of Monarchy

Monarchy refers to a political system where one person rules a country. Colonel Gaddafi is the best example of a Monarchist who ruled over Libya for years. Only the relatives or successors of a leader can take over power if a leader dies. Based on Libya’s past experiences, the disadvantages of the Monarchy are pretty clear to eyes. However, this is not the same in the case of every nation. Thailand is another example of another Monarchist nation where situations are not entirely similar to Libya. Therefore, evaluating the Advantages and Disadvantages of Monarchy is foremost before deciding its fate.

What are the Advantages of Monarchy?

Usually, the monarchist is either a person or a group of family members who have sovereign control over a nation. The position is inherited from the head to heir in a monarchy system. Today, 45 sovereign nations are ruled by this form of government. There are the following advantages of Monarchy-based government.

1. Government Based on Monarchy is robust

The decision-making is faster in a government formed through monarchy as there is only one person in charge of deciding a country’s fate. Decision-making is one of the most significant parts of politics during critical circumstances such as natural disasters or national security. Even if the leader dies, the heir can take over the position and take decisive actions in the nation’s best interest.

2. Corruption Control is one of the key advantages of Monarchy

Monarchist families are usually wealthy and rich, that they have to misuse their position to leverage from the government. This means, just like a king, the leader of the state or nation would invest rightly for the development of their nation. Although, being in power, the leader gains in many different ways, such as taxes and revenues, the only class superior in a country is the leader himself. There is no one else to share or leverage the power except for the king’s family.

3. Less Arguments over Transfer of Power

Unlike democracy, there are no intervention from the general public upon choosing the leader in Monarchy. Citizens know the leader is going to be someone from the family. Therefore, powers can transfer from the deceased to the heir smoothly to continue the operations of the nation error-free. The structure of this type of government remains unchanged without any political disruptions or arguments.

4. Monarchist Countries have a strong defense

The countries formed on monarchy have a strong military backup which can be put to action anytime during an emergency. Countries like the kingdom of

Thailand have a vast military backup which is headed by a military-appointed council. As per orders, the military can take quick actions to safeguard national and public interests. The defense system of a monarchist nation ensures internal safety more than dealing with external affairs. This military system is highly effective in curbing internal violence.

5. Monarchy is the Best option for undeveloped Societies

An uneducated and undisciplined society is perfect for crime and other uncivilized acts like robbery, rapes, and social inequality. Monarchy is the essential need of the hour in such a country to protect the weaker from being exploited and bring the public to a disciplined way of living. Uncivilized citizens can only become law-abiding through monarchy.

What are the Disadvantages of Monarchy?

Not all the fingers are the same; with that said, the following section brings out concerning disadvantages of Monarchy. Leadership comes with responsibility, and most of the problems on a monarchist government are associated with it.

1. Poor leadership can spoil a nation

In Monarchy, a single person rules over a country till his death, whether he is corrupt or not. This means, if a leader is evil or is incapable of leading the nation to a progressive route, the public can't6 remove him. Corrupt or poor leadership can never add to a country's growth but taint its reputation. Libya is an example of a Monarchy as country has not gained its reputation back even after the death of General Gaddafi.

2. Power Abuse is one of the major disadvantages of Monarchy

In a monarchy, leaders can use their power as they please. If you are a business owner within a monarchy, you are free to operate your business for as long as the leader wishes. If your business leads to any kind of threat to the throne, you could be ordered to shut your operations immediately. The same can happen is thriving and making higher revenue. The government may take its ownership anytime or even impose more taxes.

3. Classes-Based system is easy to form in Monarchy

Every society has class structures such as Middle class, Business class, and working classes. In a democratic nation like the USA, the structure shifts from middle to wealthy class as everyone is treated equally. However, the structure of society in Monarchy is solidified that finding an upward movement is very difficult. In Monarchy, the rich remain richer, while the poor remain poor.

The Monarch cannot be held responsible for a weak leadership by the general public. The blame can’t be shifted on the leader because of the fear that he holds power and can use his authority against the one who’s blaming him. In a monarchy, ordinary people are the ones who have to survive on their own if a government fails.

5. Monarchy means the Royals are at Priority

The leader and their families take the leverage of a country’s resources first and foremost. Since they are the supreme and considered royal, the services are offered to them and their families instead of heeding to general public needs. As a result, in a monarch nation, people are often overlooked, and leaders are provided with more services without considering the adverse effects on the population.

Conclusion on Pros and Cons of Monarchy 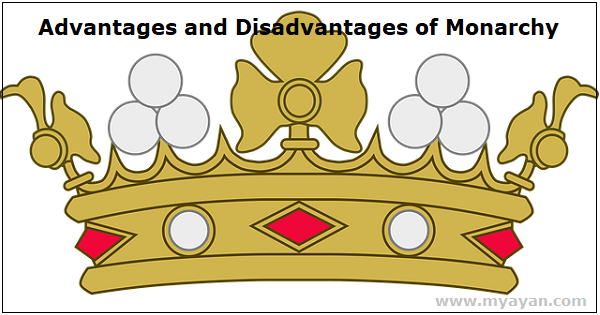 What are the most important advantages of monarchy system?

Because a monarchy is founded on the principle of inheritance, it makes it possible for power changes to go without incident. Every member of the ruling group knows who will be taking charge. The governmental structure will not change, resulting in less overall uncertainty.

What are three disadvantages of monarchy?

Monarchies can be extremely unstable and rigid. Leaders who refuse to step down at times of change can throw even the best-laid plans into disarray. Monarchies also tend to support the idea that ruling is a privilege for those born into it rather than something earned by merit or competence. Finally, there is no guarantee that the country's best leader will be chosen. Sometimes monarchies do not have the most capable person in charge.

What are negative sides of having a monarchy?

Generally speaking, countries with monarchs usually establish royal families that pass their power down to their heirs without much resistance. Unfortunately, this lack of resistance makes it very hard to reform the government because they are usually already set in their ways.

What problems exist in a Monarchy?

Tyranny is a problem when it comes to monarchies. A monarch can have absolute power and be corrupt, in which case they could rule in a way that would go against the country's established principles. Crime is also a significant issue in a monarchy system because there are no laws that prohibit them from privately doing bad things.