Advantages and Disadvantages of Hydropower

Hydropower is a clean and renewable energy source that’s also most advantageous for commercial and domestic purposes. Hydropower is aka, water power, is the use of falling or fast-running water to produce electricity or for any purpose. This kinetic energy of the running water are converted into electrical or mechanical energy. There’s a lot of science behind generating this wonderful source of energy. How well does this power bode with real aspects? The advantages and disadvantages of hydropower detail further.

Just like other sources of energy, whether renewable or non-renewable, hydropower also has its pros and cons. The coin has its faces, from generating electricity without emitting greenhouse gasses to causing environmental and social concerns.

Hydropower is the most widely-used renewable source of energy throughout the world. Hydroelectric Power Plants and dams represent about 17% of the global electricity production. Besides the domestic uses, this clean energy course also helps the industrial sector.

China, Canada, Brazil, and the USA are the leading producers of hydroelectricity in the world. Leaving no carbon footprints theoretically, water power has the downside, bringing harm to water quality, wildlife habitat, and aquatic life.

What are the advantages of Hydropower?

Starting with the bright side first, There are several advantages of hydropower that you should familiarize with.

Hydropower neither uses any toxic elements nor does it leave any toxic residue; the best advantage of hydropower is it doesn’t deplete the amount of water throughout the entire process of generating electricity. Unlike traditional fossil fuels like coal and petroleum, using water power is the best sustainable option for human growth and development for the oncoming centuries. Building large hydropower facilities like dams and reservoirs, once operational, hydropower plants themselves don’t require burning any fossil fuels.

Hydroelectric power is obtained through the natural source of life that’s abundantly available on earth. It is a renewable energy as the power is generated from running water. The energy source water is abundant on the earth’s surface that cannot be used up for many centuries to come.

Also, as long as the natural processes of evaporation and condensation occur, the planet will be powered by water. The energy produced may take some time to reach the drought-hit regions, but in times, reservoirs and artificial riverbeds can help solve this issue as well.

Wind Energy relies on winds, and Solar Energy requires sunlight. On the other hand, water doesn’t depend on any other source except of Hydrology. Glaciers, rivers, and rains all efficiently contribute to hydropower generation without depending much on the environmental conditions.

Natural calamities like floods and melting glaciers can wipe out entire populations off the map. Constructing Dams and reservoirs can help make the land inhabitable and letting the population make the optimum use of land for agricultural and industrial purposes.

Every dam, reservoir, or hydropower plant needs a workforce to handle the operations. Where there is work opportunity, there are plenty of career options for the deserving ones. More hands mean more employment. Also, the reservoirs can be used as tourist spots for visitors and local residents to generate revenue and utilize the most of it for the benefit of humankind.

What are the Disadvantages of hydropower?

Like every other source of energy, Hydroelectric power also has its downsides. It may have a bright future in providing a regular electricity supply to the inhabitant and bears some significant threats and risks. Here are some hydropower disadvantages to consider.

Even though Hydropower generation is non-polluting, but does have slight environmental impacts. Hydropower facilities can affect land use, homes, and natural habitats surrounding the dams and reservoirs. Reservoirs may cover people’s homes, important natural areas, agricultural land, and archaeological sites.

Massive construction leads to air and noise pollution, given that building large structures such as hydropower plants and dams takes years to complete. The noise and pollutants emanating from the construction site disturb the vegetation, wildlife, and humans who are already living in the proximity.

Hydropower projects are the biggest reason why animals and fishes are unable to migrate to different places. With a change in season, animals need to shelter themselves to another suitable location to survive. Building a power plant, dam, or reservoir also means building a huge wall restricting animal’s passage entrapping them.

The hydropower generation system can cause changes in a reservoir and natural stream water quality. Operating a hydropower plant may alter the water quality and alter the temperature of the water. Slight changes in the natural water supply may also harm native plants and animals in the river and land.

5. Construction comes at a Cost

Every hydropower project is based on large infrastructure, huge investment, Planning, workforce, and years. Building and planning such projects certainly need more than money. While a large hydropower facility can provide low-cost electricity for 50-100 years after completion, the upfront construction costs can be substantially high. Because suitable places for reservoirs are becoming rarer, a large-scale hydropower plant construction costs can be expected much more than it was years ago.

Besides describing each of the advantages and disadvantages of hydropower, this study also focuses on the considerations and impacts on every living being and region surrounding a hydropower facility. The details provided here outline the opportunities to reduce the negative environmental impacts of hydropower without significant drawbacks. 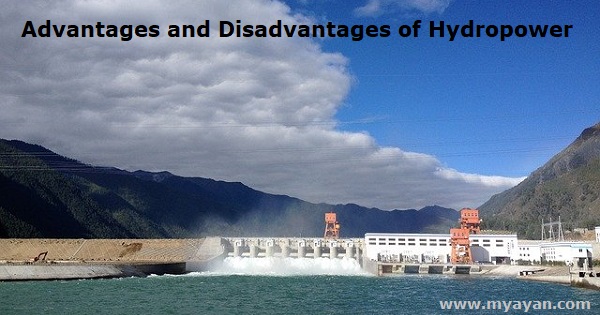 What are 2 advantages of hydropower?

What are the negative effects of hydroelectric power?

Hydropower does not emit greenhouse gases and can thus produce energy. However, it may also induce environmental and social issues such as damaged wildlife habitat, polluted water quality, blocked fish migration, and decreased recreational enjoyment of rivers.

Why is hydropower bad for the environment?

Hydropower does not pollute the water or air. On the other hand, hydropower plants might have significant environmental effects by changing the environment and altering land use, residences, and natural habitats in the dam area. The temperature of the water and the river's flow can also be altered when you operate a hydroelectric power plant.

How does hydropower affect society?

The potential benefits of hydroelectric development and its drawbacks are discussed in our social literature review. Social advantages include economic growth and improved flood control, while negative social impacts include displacement, health problems, and livelihood changes.