The world is going eco-friendly in the wake to reduce carbon footprint, and switching to Flex Fuel is one of the options to replace gasoline. This fuel is certainly not made for gas-powered cars, and your car engine has to be specific to flexible fuel. With this in mind, there are other predominant Pros and Cons of Flex Fuel Cars to consider.

Flexible Fuel or E85 is a type of renewable fuel used in automobiles. However, not all cars are compatible with this sort of fuel, except those built or modified specifically for it. It's a blend of Gasoline (85%) and ethanol, but the proportion of the components must be within certain limits for use in FVVs. Also, if you're considering them, be aware of the disadvantages and benefits of Flex Fuel Cars before investing your money.

What Is Flex Fuel?

Nations are racing towards greener options to cope with global warming and carbon footprint. Next to Net Zero buildings and Carbon Tax is Flexible Fuel. A suitable replacement to Fossil Fuel, flexible fuel, is a hybrid gasoline/methanol or ethanol substitute.

Flex-fuel vehicles or FVVS are automobiles with internal combustion engines that can use more than one fuel type. Aside from a few engine and fuel system changes, flex-fuel cars are very similar to gasoline-only versions.

Flex Fuel vehicles can run on gasoline or ethanol, E85 being the most common blend. Flex-fuel vehicles were designed with an internal combustion engine capable of using multiple fuels instead of just one. Flex-fuel is less expensive than regular fuel, so many drivers switch to it instead of pure gasoline.

What are the Pros of Flex Fuel Cars?

Having a vehicle that runs natural and renewable energy sources is one of the Pros of Flex Fuel Cars. These cars have been in long use and are widely available in both gas and ethanol. They have the same basic capabilities, except being able to burn ethanol. Let’s have a look at what FVVs offer.

One of the main advantages of flex-fuel cars is that they allow users to make large savings in their gas costs. Not only does this result in a cheaper, more efficient car overall, but there are also tax breaks available for those who choose to purchase these types of vehicles. As a bonus, many flex-fuel manufacturers also offer their customers the same sort of discounts and cash-back incentives.

2. Better Mileage is one of the Reasonable Pros of Flex Fuel Cars

Flex-fuel cars can also achieve better gas mileage than other, nonflexible vehicles. This means that drivers will spend less time at filling stations and more time on the road enjoying themselves in a safe vehicle they know is cost-efficient for years to come.

Admittedly, the cost-savings benefit will vary from person to person and company to company, but it's a worthwhile investment in most cases.

Another great advantage of flexible cars is that they have increased horsepower compared to other models while running on an alternative fuel source at the same time.

This allows you never to worry about having enough power for any given situation and can save you in a bind when it comes to unexpected gas prices after your vehicle breaks down.

Thanks to the benefits above, flex-fuel cars not only get you from point A to B with ease and affordability, but they also allow drivers a greater degree of freedom when it comes to filling up their tanks.

With no need for regular gas fill-ups, flexible fuels give people more time on their hands while still allowing them to get where they need to be. Admittedly, this may not seem like a huge deal at first glance, but it's one of the many perks that come with owning an E85 car.

Just like any other alternative fuel vehicle, you'll receive the same sort of tax breaks on flexible cars as well. Admittedly, if your car is coming up for renewal soon, there may not be much to gain from this particular advantage. However, it's a good idea to keep in mind when considering purchasing the end of your car's lifespan.

6. No major conversion is needed

Now, this probably would be one of the comprehensive pros of flex-fuel vehicles for long-term buyers. If someone wants to switch from gasoline to more environmentally-friendly fuels (such as E85), all they need is to buy a flex-fuel vehicle instead of two different cars. This way, owners save money on gas and maintenance costs, as well as their time spent on shopping.

What are the Cons of Flex Fuel Vehicles?

While there are several advantages associated with flexible fuels for cars, there are also some disadvantages worth noting before purchasing. Admittedly, these may not be a big deal for everyone, but they're still worth thinking about before taking the plunge into flexible-fuel vehicle ownership.

The drawbacks of flexible fuel cars come into play when you consider that not all cars are compatible with this sort of alternative fuel source. Whether it's due to poor marketing, lack of interest or even something as simple as personal taste, there is no way to guarantee compatibility between your car and E85 fuels in general. This makes flexible-fuel cars less than ideal and often not worth the investment.

One of the problems with flexible-fuel cars is that they are inherently less efficient than their normal gasoline counterparts. This makes them a poor choice when it comes to environmental impact and, in turn, your carbon footprint as well. However, this limitation of FVVs can be mitigated by using alternative fuels such as electricity or solar power rather than gasoline in general.

3. Durability is Among the Preliminary Cons of Flex Fuel Cars

Another downside of FVVs is that they are less durable than standard gasoline vehicles. This means it's important to be especially careful with your car and avoid serious damage as much as possible if you want to maximize the lifespan of your vehicle in general. Although this problem can also be solved by actively taking care of your automobile, there's no getting around the fact that E85 cars are inherently less durable.

On the other hand, burning ethanol will still produce carbon dioxide emissions into the atmosphere, although they are lower than those produced when gasoline or diesel is burned. It's fair to claim that E85 is "greener" than gasoline, but it isn't quite ideal since 15% of it is still pure gasoline. The governments will require more R&D to develop a fuel that the public can use without polluting.

One of the prominent cons of flex-fuel cars is that you cannot upgrade them with larger tires or other off-road modifications. While this may not be a problem for most people, it's an important factor to consider if you regularly go off-road and take your vehicle on rough terrain as well.

Flex Fuel cars are less valuable than their other counterparts because there are fewer options for choosing replacement parts. Since this type of vehicle is still fairly new, drivers do not have much experience when it comes to taking care of them.

Conclusion for Pros and Cons of Flex Fuel Cars

Every person who decides to buy a Flex-Fuel vehicle should weigh all Pros and Cons of Flex Fuel Vehicles before deciding what kind of car they want to drive in the future. People who live in areas where E85 ethanol fuels are available and their schedules do not get in the way should consider this type of vehicle.

Still, everyone else can stick to regular gasoline cars. There are certain benefits and drawbacks no matter which kind of car a person chooses, so long as they consider them before making them part of their lifestyle. 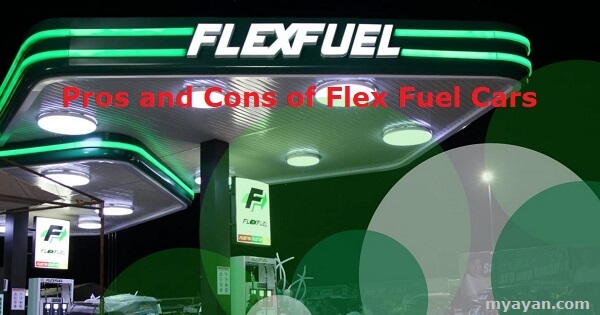 While some may believe that utilizing an alternative fuel source will harm a vehicle's performance, this is not the case. When E85 is used in Flex-Fuel vehicles, there is no performance loss. Some Flex-Fuel vehicles experience gains in torque and horsepower due to using E85.

How long do flex-fuel engines last?

It might endure for years or disappear in as little as three months. Its longevity is determined by various factors, including the amount of moisture in the air whether the fuel system is closed.

What is the benefit of a flex-fuel vehicle?

When you used premium-grade ethanol gasoline, the automobile's emissions were far worse. In the long run, you'll be less reliant on oil and its prices. You may now buy new or second-hand vehicles without paying a premium rate. You might save money by utilizing this approach if gas costs more money.

Can I use regular gas in a flex-fuel car?

Any octane level of gasoline is suitable in a flex-fuel vehicle. The sensors in an FFV detect whether the fuel is pure gasoline or 85% ethanol, and adjustments are made to ensure accurate fuel injection and combustion timing. Injecting E85 into a car that isn't prepared for it can be harmful.