Pros and Cons of Grand Jury 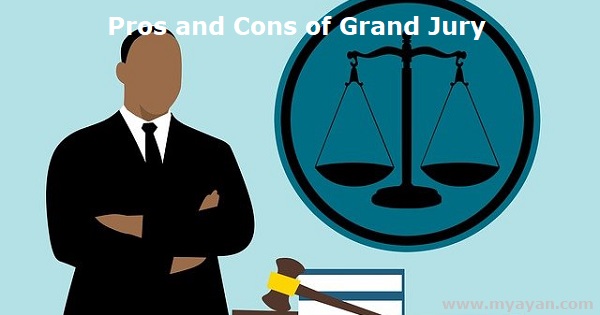 Unlike a Trial Jury, a Grand jury is a type of American criminal court, usually made up of 16-23 people. These people are sworn to investigate any crimes which might pose an immediate or potential danger to the community. They decide whether the charge against the individual should be dropped, go to trial before a judge and jury, or remain on file without formal action. Depending on the deep investigation, evidence, and time duration of a case, there are several pros and cons of Grand Jury to Consider.

The grand jury stage allows a prosecutor and defense attorney to investigate the case in-depth. It gives them an extra chance to find any additional incriminating information about the defendant. Furthermore, evidence is presented in secrecy without cross-examination or rebuttal from the defense, offering an advantage for prosecutors who know which witnesses to call and not present questionable evidence.

What are the Pros of Grand Jury System?

The grand jury procedure has several advantages for the United States government and citizens who might be called to appear before it. Because of the expense of lengthy criminal and civil trials, the grand jury may serve as a staging event to go through all necessary procedures. Ensure the following pros of grand jury before you consider appealing as a defendant.

1. Protects the Rights of the Defendant

According to the US Courts, if a suspect is indicted, they will have to go through the entire trial procedure. If not, the defendant can save time and money because it does not go through a full trial unless the grand jury finds enough evidence against them.

In addition to shortening the timeframe from charge to verdict, indicting an individual for criminal charges saves both parties from long court cases involving evidence collection by the defense team and may postpone proceedings pending further investigation. If no indication appears after a certain amount of time, prosecutors can drop charges altogether.

Many states have laws that allow for an arrest before due process has been completed if probable cause exists that the accused may harm the public. According to the Constitution and Supreme Court ruling, it is justifiable if there is a reasonable belief that a crime has been committed and the defendant's character evidence indicates they would be dangerous. That way, it’s one of the noteworthy pros of grand jury that allows innocent defendants to get their cases reconsidered.

In grand juries with 23 jurors, each member only needs one vote out of twelve to indict someone for criminal charges. In this way, they cut down on the number of trials held where a unanimous verdict must be achieved to move forward with prosecution. A grand jury also functions as an impartial judge by assessing whether a prosecutor has brought a case against a defendant without bias or malice, which prosecutors are required by law to do.

5. Potential for Rehabilitation is one of the Main Pros of Grand Jury Proceedings

If years of incarceration and legal fees in a trial would be unjust in its punishment and not benefit society, the grand jury is authorized to dismiss the charge against the suspect. Furthermore, if evidence comes out during the trial that shows that an accused person is innocent but has already been convicted by the court system, they can apply to have their case reopened through a Writ of Coram Nobis.

What are the Cons of Grand Jury System?

Grand juries offer many benefits for public safety and expediting criminal proceedings when used correctly. On the contrary, they also pose potential threats to defendants' rights during the due process when either overused or misused by prosecutors and state governments. Because they meet in secret and do not require unanimous consent, grand juries can be used against defendants for political and personal reasons. These considerations bring the discussion to focus on some cons of grand jury mechanism and its potential loopholes.

If a defendant is indicted, their reputation will forever be marred in the public eye even if they are found innocent after the trial. Moreover, there exists no way to counteract false allegations made by either law enforcement or witnesses who come forward with unproven claims during a grand jury proceeding. These accusations could influence other police investigations and court cases that may occur in the future.

2. Unreasonable Indictment is one of the rare cons of Grand Jury

The US Constitution's Fourth Amendment guarantees citizens freedom from unreasonable search and seizure through illegal evidence gathering techniques such as wiretapping and unjustified detention without due process. Juries do not call all potential witnesses, hear all possible evidence, or even require the prosecution to show that their case has enough merit to indict someone. Therefore, many individuals are indicted without having committed any crime at all.

A grand jury investigation is one of the only ways citizens can hold public officials accountable when they have infringed upon civil rights. Yet because grand juries meet in secret and do not have a judge or defense attorney present to argue on behalf of the accused, police officers are hesitant to cooperate with prosecutors' requests for information regarding officer-involved shootings. This specifically affects the positive image of the policing system hence turning into one of the major cons of Grand Jury for the police department.

The abuse of power is common these days, whether you are a federal or date official. Prosecutors can take advantage of grand juries by using them to extend their authority that removes many of the procedural hurdles associated with regular criminal proceedings.

5. No "checks and balances"

Because grand juries indict more than 99% of suspects brought before them, they have been criticized as being a rubber stamp system that does not provide proper oversight for law enforcement. In this case, abuse by officials can go unpunished without repercussions from citizens or higher courts that oversee the work they produce.

Conclusion on the Pros and Cons of Grand Jury

The grand jury system offers many advantages for public safety and expediting criminal proceedings when used correctly. However, the drawbacks of this process are numerous. The only way to combat these problems is through transparency in law enforcement practices that operate under a veil of secrecy with no oversight from citizens or higher courts overseeing their work.