Advantages and Disadvantages of a Natural Experiment 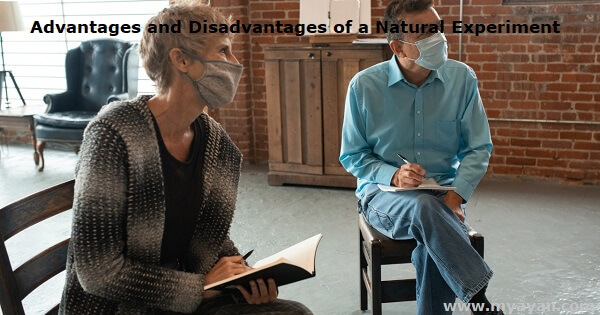 Natural Experiment is one reliable way to validate real-time information about a new product, theory, or idea. Experimental research is a commonly followed approach to determine the value or validity of a product. The same applies to consumer behaviour. Efficacy of further results are affected by monitoring and administration. Even though the experimental research is efficient, it can be easily manipulated by false input. Here are some Advantages and Disadvantages of a Natural Experiment to consider.

What are the advantages of a Natural Experiment?

Unlike a structured experiment, a natural observation or experiment occurs in a natural setting where researchers or groups of researchers don’t intervene while the data is gathered. There are several advantages of a natural experiment that’s why psychologists rely on such type of observations.

Setting up the environment for natural observation is the most significant part. People or subjects tend to react differently if they find themselves in an unfamiliar situation. So first, they have to make sure they are in their comfort zone.

For example, a patient may be unable to explain the problem at the hospital but can speak clearly about the issues at home. By taking the appor0ach of natural experiment, the researchers can observe directly while assessing the subject in their comfort zone.

2. Accuracy is one of the key advantages of a natural experiment

People who react naturally in a natural setting tend to give true details under observation. Social researchers can observe choices in the natural setting that let them derive conclusions that are usually not achievable in a laboratory setting.

Based on the unique observations, the researchers can further lead the investigation by studying specific social behaviours. Thus, there are more advantages of a natural experiment as it leads to insights helping individuals overcome problems.

3. Ideas derived from a natural experiment are less manipulated

Closer and real-time involvement of subjects during an observation is the key data generator. A naturalistic observation enables researchers to study subjects that could not be manipulated if they were in a lab setting.

For example, a prisoner tends to give false data due to the fear of the investigators. It’s gravely important to not confine the subjects of the study to create opportunities for information collection.

Every researcher has more than one method to collect data while observing. For example, they might identify and note the difference in the number of attempts. They can use different approach every time they investigate or note the response from the subject.

For example, data can be collected through Video recording, Audio recording, or even written notes. This structure enables the researchers to compare the situations and determine if more information is available to draw a different conclusion.

Researchers who conduct naturalistic studies have the most advantages of a natural experiment. The approach can help them receive accurate reactions from the subjects in a natural setting.

This process is also suitable for non-human subjects. Individuals tend to forget that they are under observation when dealing with stressful or emotional situations. This makes it possible for researchers to see the buildup process that eventually leads to a choice or behaviour.

What are the Disadvantages of a Naturalistic Observation?

There are certain limitations to this approach, as letting the subject feel at home is one of the major disadvantages of a Natural Experiment. Also, data is not always 100% accurate due to the biasness of the investigators. The following are some cons of natural observation.

1. It’s difficult to find the root cause of the subject’s behaviour

It’s difficult for a researcher to spot the exact cause of a subject’s behaviour during a naturalistic observation. This perhaps is because of multiple factors affecting the lives of people simultaneously.

While conducting a study in a natural setting, different types of pressures can cause people to react in different ways. Such reactions may not be under observation, and the conclusion derived may be even more confusing for the investigator.

2. Inaccurate data is among the rare disadvantages of a natural experiment

People start reacting differently soon as they know they are being observed, even if they are in a natural setting. As a person deals with personal choices, ethics, and morality during the study, their response may alter once they sense they are being recorded.

For example, a prisoner starts pretending to not know the topic being discussed and may give misleading information. People start pretending as if they are playing as expected by the researcher. Such disadvantages of a natural experiment exist even if researchers make efforts to avoid the situation.

This study method takes more time and patience, and the research relies on the subject’s response entirely. The cases, results, and patterns can only reach upon the subject’s willingness.

A single investigation can continue for years, requiring an extensive investment necessarily in the form of time to produce accurate results. Therefore, investment of time and efforts are the common disadvantages of a natural experiment.

4. Not everything is under control

Researchers do have control over some variables during a naturalistic study, but they can’t control everything. There may be external distractions that could change the way people interact with one another.

For example, a classroom full of students being observed by social scientists may not contemplate the concept if there are noisy disturbances outside. It would shift their attention to unnecessary things, which would ultimately alter the conclusive data.

5. The retrieved information may have limited use

Given that a natural experiment is conducted on a single entity or a closed group, the information is limited and incomplete in social implementation.

Also, the information that social scientists collect through a natural experiment is often useful during the first stages of study. That’s where composite opinions start forming. As the proceedings go beyond, the increased inputs make the first opinion less relevant for the outcome. That’s why there may be a huge difference in the starting and the results.

Conclusion on Advantages and Disadvantages of a Natural Experiment