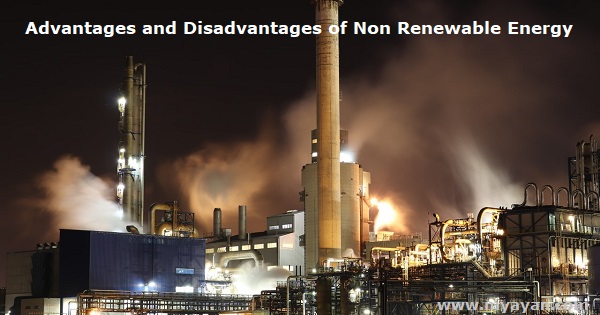 The Advantages and Disadvantages of Non Renewable Energy highlight the benefits and limitations of renewables. Even though switching to renewable energy is the only option to survive the climatic complications in the future, nations still rely on Non-Renewable Energy.

Realizing that Coal, Fossil fuel, Natural gas, Oil, and Nuclear energy will eventually run out is even more distressing. As for now, these non-recoverable energy sources are helping global society to make use of the energy for the required purposes. As they are available and run the engines of the world, new technologies direct humankind towards sustainability.

What are the Advantages of Non Renewable Energy?

Even if the used non-renewable energy sources take millions of years to form, they are in full use right now. Because if the materials took millions of years to form, energy sources such as fossil fuel, coal, and Petroleum would last for about centuries. The following are some advantages of non-renewable energy and the reasons why they are still in use.

1. Convenience is one of the great advantages of non renewable energy

Coal, natural gas, and gasoline are essential Nonrenewable energy sources required daily. These materials are also easily available given that some locations are not well-suited to the production of renewable energy such as solar, wind, and geothermal energy, its nonrenewables that can fulfill the demand for energy needs worldwide.

Again, Coal and fossil fuel are used to generate electricity; crude oil and natural gas are also hugely used for industrial and domestic purposes and are often more efficient than renewable energy sources.

Diesel, gasoline, coke, plastics, and soaps are common by-products of nonrenewable sources consumed every day. All these materials are obtained upon processing once they are recovered during refining. Therefore, obtaining multiple by-products are among the commendable advantages of nonrenewable energy sources.

However, renewable sources may sound like a silver bullet to environmental problems, but they do not provide products that may fit into the modern lifestyle.

The USA is the world's largest nuclear power producer, accounting for more than 30% of worldwide nuclear generation of electricity. In addition, coal energy in the United States generates about 20% of the country's electricity. The electricity generated is used for both domestic and commercial purposes.

5. Non-renewable energy is Cheaper to Obtain

Renewables may be 35% more efficient than nonrenewables, but the extraction and refining processes involved with nonrenewables is 30% cheaper than the former. The reduced cost is common of all the advantages of renewable energy.

Even after comparing the costs of installing the equipment for renewable sources, the difference in expenses is considerable. For example, building dams or installing wind turbines and solar panels is more expensive than the crude oil extraction process or coal mining.

What are the Disadvantages of Non Renewable Energy?

The other side of the coin has something else to state regarding the use of nonrenewables. Since the resources will be extinct if used rampantly, the following disadvantages of non renewable energy are much more concerning.

1. Pollution is among the troubling disadvantages of non renewable energy

The more nonrenewables are consumed, the more pollution will be caused. Fossil fuel contributes majorly to global greenhouse gas emissions only. Let’s not forget that coal, diesel, and gasoline have their share to disturb the environment. If nations can curb this problem, a lot would be saved in the years to come, including the cost spent on the healthcare system and sustainability.

2. Some Energy Sources will run out ultimately

This being said that all the non-renewable energy sources take millions of years to form, if used recklessly, they will run out eventually. In such a case, nations would have to switch to alternatives in the remaining time.

The developing nations still rely largely on non-renewables thus, these countries will face many problems in the future in order to figure out alternatives to non-renewable energy sources.

3. Combustion of Fossil Fuel and Coal is dangerous to health

Be it Fossil fuel or coal, both release harmful gases into the environment, which leads to severe health issues. Coal Ashes settling in the surrounding areas or coal mines can produce up to 100 times more radiation than a nuclear power plant.

Coal upon combustion also emits toxic compounds like Nitrous Oxide and other heavy metals. Exposure to these compounds can lead to fatal diseases such as asthma, black lung (Coal Worker's Pneumoconiosis), and suffocation to workers or people living nearby. These are most considerable disadvantages of non renewable energy so far.

Combustion of non-renewable sources is as dangerous to animals and forests as it is to humans. Acid rains, high levels of CO2, and even global warming lead to the severity in the wildlife environment, disturbing it entirely.

Be it a nuclear disaster or oil leakage, wildlife is always on the edge of threat due to such man-made disasters. Droughts are also the result of an overheated planet. The excessive heat produced due to global warming is the main cause of destroying animal habitats and drying up water bodies.

The consumption or combustion, but the process of extracting and refining the non-renewable resources can also harm the environment. For example, establishing nuclear plants, digging through coal mines, or even taking up land space for refining crude oil negatively impacts the environment.

Even though these resources are available in plenty right now, all different extraction activities enhance the effect that emissions have on the atmosphere.

Conclusion on Advantages and Disadvantages of Non Renewable Energy

The risks of using nonrenewable energy outweigh its benefits, considering the future implications. If considering the present scenario, the world population relies on nonrenewables integrally. People still run their vehicles on gasoline, electricity is still being produced through coal energy, and the global economy is stabilized to some extent.

The advantages and disadvantages of non-renewable energy are pretty much understandable as modern sciences are already putting eyes and ears in finding its alternatives for a better tomorrow.

What are the disadvantages of non-renewable?

1. It is an anthropogenic greenhouse gas.
2.It generates pollution.
3.Its byproducts harm the environment. When they are used up, they are not easily replaced.
4. The cost is going up. It's been found to be non-biodegradable in many cases.
5. Its goods may be harmful to human health.
6. Non-renewable energy is also responsible for acid rain.

Why is non-renewable energy bad?

Nonrenewable resources are usually detrimental to the environment. For example, the most common nonrenewable energy sources generate carbon dioxide as a byproduct. According to most climatologists, CO2 is trapped in the atmosphere and is responsible for climate change.

What are the 5 main types of non-renewable energy?

Most of our energy comes from non-renewable resources, including petroleum, hydrocarbon gas liquids, natural gas, coal, and nuclear power.

What are the two types of non-renewable resources?

Fossil fuels and nuclear energy are the two broad categories of non-renewable resources (uranium ore). Carbon is produced through the prolonged heating and compressing of organic matter trapped beneath the earth's surface. Uranium is used to produce nuclear energy.

What is the best non-renewable energy?