Pros and Cons of Rooibos Tea

You may have heard about rooibos tea, but you might not exactly know what it is. “Roy Boss” or red bush is a plant that grows in South Africa and is famously known internationally for its health benefits. However, if you have recently heard about it, you must know the Pros and Cons of Rooibos Tea before tasting its earthy flavor.

Rooibos Tea is generally famous as Red Tea, Redbush Tea, or Bush Tea in Great Britain, it’s likely to have more names in other parts of the world. The earthy red color of this tea makes it more interesting. The beverage is known for its vital antioxidant and anti-diabetic properties.

Pros of Rooibos Tea you should know

The herbal tea contains naturally occurring antioxidants like flavonoids and phenolic acids. It doesn’t contain caffeine and has lots of benefits for people of every age. Some of the pros of Rooibos tea are that it tastes good and can help reduce the symptoms of certain diseases. Find out how you can reap benefits from it.

1. It is caffeine free

Rooibos tea is caffeine-free, which means you can enjoy it all day long without worrying about having trouble sleeping at night. Rooibos thus makes it a great drink for pregnant women due to its caffeine-free nature.

In addition, it contains no tannins and has just 0.01 percent essential oil, so people who are sensitive to these substances should find rooibos tea agreeable as well.

A drink that's caffeine-free automatically makes you direct your attention from Coffee or regular tea. Its natural properties make the drink a wonderful alternative for those who must watch their caffeine intake or other stimulants that could cause them discomfort otherwise.

3. Rooibos Tea is rich in Antioxidants

Rooibos tea is a natural, healthy alternative to other types of drinks. It contains many antioxidants, which are important for your body's cells because they stop free radicals from damaging them. The green variety has higher amounts than the red version, Quercetin and Aspalathins are some examples of this type.

Studies have shown that drinking rooibos increases levels of antioxidants within humans. Still, these effects wear off quickly, too, so it doesn't provide long-lasting protection against infection or disease though you still feel more energetic.

4. Improved Heart health is one of the pros of Rooibos Tea

In a 2011 study, 40 people at risk of cardiovascular disease drank six cups of rooibos tea daily for six weeks. This is when they found that antioxidants in the brew may benefit their heart health and keep cholesterol levels under control.

There are even some who say it can replace medication prescribed by doctors. What do you think about the notable pros of Rooibos tea and drinking this delicious beverage?

5. Rooibos Tea is a good option for Weight and Diabetes Management

Rooibos tea is calorie-free, so it may be a good beverage option for losing weight or maintaining a healthy lifestyle. In addition, a 2014 study found that rooibos increased levels of Leptin which helps regulate food intake and sends signals in your body about how much you've eaten enough.

Rooibos also has other benefits, such as being packed with antioxidants. Rooibos tea is the new diabetes cure. While it's not yet known whether or how rooibos helps control blood sugar levels, people who drink this beverage seem to have less risk of complications than those who don't.

What are the Cons of rooibos tea?

Some cons of rooibos tea include that it is not well known to many people; this means they can’t access it easily compared to coffee or regular tea. This also means there are fewer places where you can buy the drink and even if you do find some options near you. It may also be too expensive for someone who drinks a lot of hot beverages like tea throughout their day.

1. It may not be safe for people who are allergic to legumes

Many types of rooibos tea come from the Aspalathus Linearis plant, which belongs to the Fabaceae family. This means that if you have any allergies or sensitivities at all related to this group, including peanuts and soybeans, you may likely experience an adverse reaction after drinking rooibos too.

If so, it would probably be a good idea to switch over to another herbal beverage instead. Some experts recommend doing when ingesting something new like this just in case there might be a problem with your health later on down the road because of those ingredients.

2. It may interfere with medications

Like most other beverages, rooibos tea could potentially interact badly with some types of prescription drugs such as for heart or diabetes. If you are on any kind of medication to treat a health condition, you must talk to your doctor or pharmacist.

3. Too much drinking can cause to Gas and Bloating

Rare rooibos side effects include gas and bloating which can happen when you tend not to drink enough water when drinking the tea.

Other than these issues, though, there aren't many disadvantages associated with using rooibos as part of your daily life either for its benefits or otherwise. It has been used safely by generations, and there haven't been any major side effects found in most cases.

4. It may cause problems with Liver

Rooibos tea is not recommended for anyone who has a low functioning or underactive liver. Large doses of caffeine may take a long time to have an effect. In rare cases, large amounts (10 cups or more) can cause liver damage.

Some compounds found in rooibos tea have actions that mimic the female hormone Estrogen; therefore, women with hormone-related cancers such as breast cancer should be cautious about drinking too much. Overall, the severe cons of Rooibos tea are rarely reported.

Drinking rooibos tea is good for your health as long as it’s brewed correctly. If brewing less than three minutes, there will be no caffeine present. If brewed in a limited amount, the red bush tea is most beneficial for health. However, too much of it can lead to adverse health conditions. It’s better to stay on the safe side once you understand Rooibos Tea Pros and cons clearly. 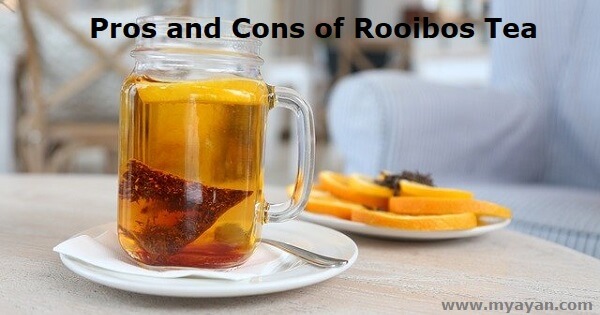 What are the disadvantages of drinking rooibos tea?

Rooibos is a relatively safe tea. Although uncommon, some harmful effects have been observed. One case study revealed that drinking large amounts of rooibos tea daily was linked to an increase in liver enzymes, indicating a liver ailment.

Who should avoid rooibos tea?

Women with estrogen-sensitive cancer, such as breast cancer, should avoid rooibos tea. According to one research, drinking too much rooibos tea regularly can raise liver enzymes, damaging the liver tissue and its function.

What happens when you drink rooibos tea everyday?

Rooibos tea contains antioxidants, enzymes, and chemical compounds that aid in reducing inflammation and the prevention of illness. Drinking a cup of rooibos tea every day can help you stay healthy because of its potent antioxidant and anti-inflammatory qualities.

How much rooibos tea should I drink a day?

According to experts, six cups of rooibos tea per day is adequate, but we believe even one cup will suffice. The ideal way to consume rooibos tea is simply by adding boiling water and letting it steep until you want it strong.