Advantages and Disadvantages of Organic Food

If it matters what's on your farm and eventually on your plate, it's important to know the advantages and disadvantages of organic food first. As the world grows more aware of Genetic Engineering and GMOs, the demand for organic produce has also staggered.

Organic Food benefits the ecosystem and humankind, be it meat, vegetables, or dairy products. But, how well-prepared are Farmers and Agro-businesses relying on the massive production techniques to meets the growing population's needs? The pros and cons of organic food dish out the possible advantages and challenges ahead.

What is Organic Food?

The food products that are produced through natural methods without processing or refining using chemically is termed organic. Some people prefer to eat organic food due to its high nutritional value and health benefits. The process of organic farming doesn’t use chemicals such as Pesticides, herbicides, or fertilizers. Thus it’s safe for consumption.

According to the Organic Trade Association, Organic Food has grown in popularity in the US in the past 30 years. The demand for organic products is higher than ever, with more than 82% of Americans prefer buying naturally grown food.

What are the Advantages of Organic Food?

The advantages of Organic Food consumption are eye-opening and backed by scientific evidence. Not only does the organically grown food tastes better, but it’s also healthier. Some believe that it’s also better for the well-being of animals. Since there is no genetic engineering involved, animals genes remain unaltered and can’t affect humans. Some other positive considerations about organic food are as follows.

Chemical-free crops are not only safer for the air but also for friendly insects (honeybees). People often choose organic food to avoid consuming artificial chemicals. Also, there is no residue of pesticides or herbicides left on the ground or air. This helps the soil retain its value, and farmers can use manure to ramp it further.

Consuming organic foods can also reduce your exposure to some pesticide residues. It may also alleviate your risk of exposure to antibiotic-resistant bacteria.

Organic products are not only safe from chemicals, but they also have higher nutritional value. According to the study, upon comparing Comparing the fatty acid composition of organic and conventional milk, Organic milk had a higher proportion of PUFA to monounsaturated fatty acids than the latter.

Another study revealed that organic foods contain up to 40% more antioxidants when compared to conventional produce. Such a vital amount of nutrients provide proactive advantages of organic foods to humans. An adequate level of nutrition also reduces the risk of certain diseases or allergies.

Considering that the FDA approves a few GMOs for consumption, they also are relatively more expensive to buy. However, many organic foods are stacked on the shelves in grocery stores that users can buy at a lower price.

Also, finding home-grown food at local suppliers is easier than in the market. The frequently consumed products are often equally priced as their counterparts. If the production is higher, you may get them at lower prices.

Farmers don’t have to invest in fertilizers, pesticides, or other artificial chemicals to boost crop production. Also, organic foods do not travel farther to the outer markets. The chances are, you can find more of it stocked in our local stores.

The expenses spent on locally grown items circulate within the community in one way or the other. That means, from farmers to consumers, there are more advantages of organic food from supply to consumption. Also, reducing pollution and waste materials leads to a healthier environment for the community and livestock.

Pesticide manufacturers encourage farmers to use more and more pesticides to make profits. Exposure to an excessive amount of pesticides may cause fatal diseases. These additives are easily delivered to your dining table.

When the chemicals reach your food supply, it may lead to severe health issues such as different types of cancer, endocrine disorders, infertility issues, or even Parkinson’s Disease. Absolute no use of pesticides and other chemicals during the production of organic crops means fewer health hazards in the community.

What are the Disadvantages of Organic Food?

Contradictory facts revolve around the production of organic food especially considering meeting the consumer needs and economic growth. There have been considerations over the cost, which contributes mainly to the disadvantages of Organic Food.

Restricted use of pesticides and herbicides means more loss to the crops because of insects and micro-organisms. Usually, traditionally-grown food is adequately supplied to the community or to market to satisfy consumers.

Even the home-grown food is cheaper at some places, the overall price of the product may go as high as 47% compared to traditionally-grown food.

2. Organic foods may not always be available everywhere

The global population has been relying on conventional farming. The experts predict that it won’t be possible to drive the world towards organic farming. Instead, there will be an ever-increasing demand for food as the population grows further.

There are still many countries where organically grown food is in limited stocks. Therefore, switching to organic foods may be the biggest challenge for countries with food scarcity.

3. Shorter shelf life is one of the major disadvantages of Organic Food

Lessor no preservatives means the organic food will oxidize faster and eventually have a short shelf life. Some vegetables like turnip greens, mustard greens, and endive rot faster than other vegetables.

Such vegetables, if left uneaten or unconsumed, would be thrown into garbage eventually. This would also lead to food wastage issues. This would impact not only farmers but also the grocery store owners economically.

4. Organic foods are vulnerable to contamination

Organic produce in the farmland is often at the risk of infestation from bacterial or fungal attacks. In the absence of pest control methods, the crops become breeding grounds for insects and microorganisms.

Conclusion on pros and cons of organic food

The cons of organic food are noteworthy but also controllable. Replacing the natural pest control methods and monitoring crops to prevent infestation are some methods to start with. With all things considered, naturally grown food is the right way to enjoy tasty, delicious food and lead a disease-free life. 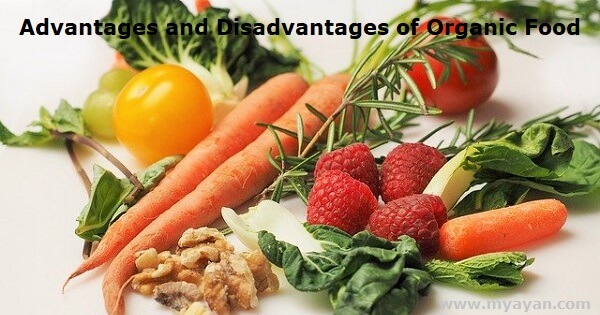 Can you taste the difference in organic food?

The majority of the research suggests no difference in nutritional value between organic and conventional foods. Furthermore, most of the studies indicate that it's challenging to tell an organic food from a conventional one by way of taste alone.

What are disadvantages of organic food?

Organic food requires the land to be free from any chemicals for at least three years before crops can be grown on it. This means that prices are higher than those produced by conventional farming. Organic foods also have a low density and spoil faster than those grown by conventional means. Many critics point out that this could lead to a higher requirement of energy for storage and transport costs. In addition, organic food is not as high in yield per hectare as nonorganic food.

Is organic food worth the expense?

Organic fruits and vegetables are generally more expensive than conventional produce. According to a study of 17 organic items, organic foods can be anywhere from 7% to 82% more costly than comparable non-organic options. However, in certain situations, the premiums might be much more significant.

When a plant is grown organically without pesticides, its flavour improves. In addition, higher antioxidant levels impact food's organoleptic qualities?taste, aroma, and mouthfeel?as well as how humans perceive a food's unique flavor, according to studies presented in the BJN paper.