How to take care of health in the rainy season 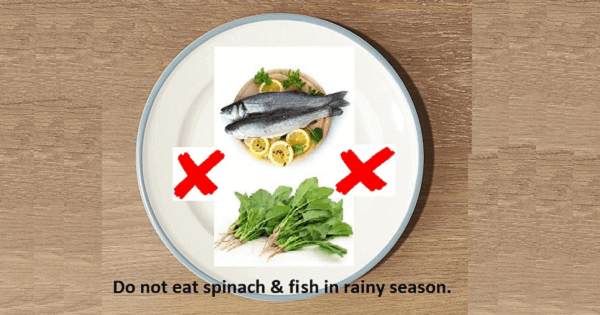 Why knowing about the foods to eat during the monsoon is important for you? well because with monsoon comes a lot of bacterias which can enter your body through the foods you eat And that’s why you should read this whole article to get complete knowledge of rainy season diseases and precautions and also healthy food for monsoon.

Have you ever about the rain diet or the monsoon diet? If not then in this article we will tell you why you should keep the fish and spinach away from your plate in the rainy season. The rainy season brings you many diseases. In the monsoon, the digestive power of our body becomes weak, so slight negligence in food can result in any illness like food poisoning. In Ayurveda, food has been decided by every season. Keep this in mind, you can avoid falling ill. And here is the list of foods according to the Ayurveda monsoon diet.

Worms on spinach, cabbage, and other leafy vegetables can cause illness to you like food poisoning. And the possibility of getting bacteria is high. In this season, the yield of green leafy vegetables is also less. If you have green and leafy food, wash it well with lukewarm water and eat it.

2. Make the distance from the fish

Eating eggs and fish increases the risk of food poisoning during the rainy season. During the rain, pollution is increased in the water, which also causes the molecules to settle on the fish. It is also difficult to get fresh fish in this season. Monsoon is the time for the reproduction of fish and other marine organisms.

3. Even Curd, buttermilk is also not right

There are many bacteria in our environment during the monsoon. Bacterial content is also high in curd and other dairy products. The use of curd, buttermilk, lassi is not right in the rainy season. You should always drink milk after boiling during the rainy season.

4. Salad is better, but not in monsoon

Save as much as you can from raw food. By the way, salad is healthy but avoid it in the monsoon. Do not eat too late or the fruits, vegetables which are kept open in the market. If you still want to eat salad, it will be better for you to steam it before eating.

5. What to eat in the rainy season

Use warm soup, lentils, porridge, khichadi, to eat edible food, As these foods are rich with common anti-oxidants, which keeps the digestive system working. Eating fruits like Jamuns, Potato Bukhara is also very beneficial. Avoid drinking watermelon during the rainy season. Eat bitter vegetables like bitter gourd, fenugreek, guar pods. Add lemon and seasonal food to your diet. Due to the weakness of the digestive system, do not eat Bajra like fat grains, gram, and barley in wheat flour. Mixing roti with Basil, garlic, turmeric, cumin, mustard oil is a good option in the rainy season. Use honey, black pepper, peepal, cinnamon, cassia, coriander, celery, rye, and asafoetida.

What kind of food we eat in rainy season?

Some of the best additions to your diet in the rainy season for boosting your immune system are fruits like apples, java plum, litchi, plums, cherries, peaches, papayas, pears, and pomegranates.

What should not eat in rainy season?

The lush, wet season brings on high humidity and temperatures - the perfect conditions for mold, fungus, and insects to thrive, even on edibles. The moist, warm monsoon season is ideal for bacteria and fungi to grow. When it comes to what to avoid during the rainy season, green leafy vegetables, seafood, unhealthy junk foods, fizzy drinks, mushrooms, and raw foods all come to mind.

Is banana good for rainy season?

Bananas are a great way to protect yourself against gastrointestinal infections during the monsoon season. They are packed with vitamins and minerals that help with proper digestion and can keep you healthy and feeling your best.

What do we drink in rainy season?

The rainy season is the perfect time to boost your immune system with some helpful bacteria! Not only will they help to remove congestion, but they can also help to prevent cold and cough. Make sure to drink plenty of hot water during this time to help your body stay healthy and hydrated.