Advantages and Disadvantages of Web Series

Watching web series is one of the common things people do these days. Users have found new ways to stay entertained and engaged with their favourite shows and flicks. With Netflix, Amazon Prime, SonyLiv, Voot, ErosNow, and others releasing new media content, there is a boom in online streaming platforms. But how does watching web series affect users? Is it just to spend hours of screen time for entertainment? The advantages and disadvantages of Web Series take the discussion further.

As OTT Platforms are getting more and more attention, creators are focusing on compelling media content to attract viewers. Netflix, SonyLiv, ErosNow, Amazon Prime, Voot, and Hotstar, are considered the best platforms for web series.

What are the advantages of web series?

Watching web series on OTT platforms is entertaining, fun, and sometimes addictive. There are certain Advantages of watching Web Series that you might not experience on your TV screens.

You can find any web series based on your interests, from action thriller to drama, it’s easy to find the content of any genre you like. You just have to register your account to view any show as you please.

2. Enjoy Shows in your language

Most OTT platforms aim at increasing viewership by releasing web series in different languages. Be it Money Heist, the Body Guard, or Narcos, you can tune into your favourite web series and enjoy binge-watching.

3. View on Demand is one of the greatest advantages of web series

When you subscribe to viewership, you own the playback controls of the series or movies you are watching. You can skip to the next or previous scenes, episode, or even seasons. Such controls are not available on your cable TV. Also, there are options to customize list of your favorite series, you can add seasons to the list and watch them any time later.

Crisp sound and High definition picture quality make watching every episode more interesting. All the content available on OTT platforms is of high definition, and that’s among many advantages of watching web series. You are least likely to be distracted by anything as you delve into the details of your favorite flick.

You can watch your show on-demand that means anytime and anywhere. Most OTT platforms come with multi-platform support to viewers so you can watch on your laptop or smartphone.

You can turn off your computer, use the same login details on your smartphone and resume your show from where you left. Every over-the-top platform comes with its iOS and Android apps these days.

What are the Disadvantages of Web Series?

1. You need to pay more to watch HD content

That means you have to pay more in order to watch your favorite web series in HD quality. Higher costs are the major disadvantages of watching web series where pricing plans go up from basic to a premium subscription.

When a web series is interesting and compelling, you can’t help yourself with curiosity. The next thing you do is to watch the back-to-back episodes. This also exceeds your average screen time limit, which is 1 to 2 hours every day.

According to studies based on viewing media online or other platforms, too much screen time can lead to obesity, sleep issues, or chronic neck. Some of the major disadvantages of watching web series for too long are depression and anxiety.

3. Wastage of time is one the dire disadvantages of web series

The main motive of every OTT platform is to provide entertainment to the viewers. That means you won’t find anything informative there. There are plenty of shows, and web series are available online to distract you.

If you are a student or a professional with a day job, watching web series and shows can be addictive, which would waste plenty of your time. Watching web series late at night can also affect your work efficiency at the office.

4. Poor Internet Speed can spoil all the fun

Since the content is streamed online in HD format, a poor network speed can make viewing painful. You won’t be able to stream your favorite episodes uninterrupted if you have low network bandwidth or rattling internet speed.

Most of the bandwidth is consumed by the OTT platform while you stream audio and video content. To experience the advantages of web series, you have to have high–speed connectivity such as a 5g-network.

If you are running low on data plans, beware; you need to limit your viewing. Apart from OTT platforms, several applications run constantly on your phone, consuming internet data.

As you stream online, the speed of data consumption accelerates faster. Not only you’ll lose your valuable data, but it will also cost you more. The disadvantages of watching web series would turn more problematic when the subscription fee accompanies data cost.

Conclusion on Advantages and Disadvantages of Web Series

Evaluate the pros and cons of web series before you head to subscribe to watch the trending seasons. Considering your data plan, budget, and time availability, you can decide whether watching web series is a good option or not. Health issues are serious factors to heed if you are one of the night owls. 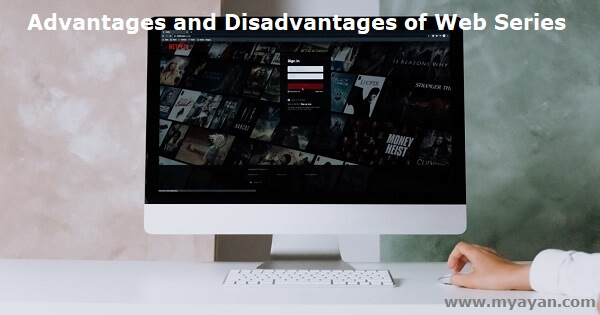 What are the advantages of web series?

Web series enables viewers to watch shows whenever they want. For years, individuals have scheduled their lives around their favorite TV programs. People now choose to watch their beloved program whenever and however they choose without the interruption of commercial breaks.

What is the impact of web series on youth?

A youth watches online video content for an average of eight hours and 29 minutes, far surpassing the global norm of six hours 45 minutes. In recent years, watching violent web series has been linked to increased aggressiveness and violent behavior in youth.

How do web series make money?

AdSense and pay-per-view or subscription-based Video on Demand are two main ways for independent producers to fund and distribute web series. Users come to the site to view videos.

How much do series actors get paid?

How does Netflix earn?

Netflix's most important source of income is subscriptions. Consumers pay to access films on Netflix and receive physical discs sent to them, which is how the firm makes money.