Wheatgrass Powder Benefits and Side Effects - Pros and cons

Health Benefits of Wheatgrass - Wheatgrass Dangers: You know how wheat tastes like; it’s the time to taste the green wheat or the leaves of wheatgrass. The highly healthy food that is on the table of most health and fitness enthusiasts these days is the Wheatgrass. It is the benefits of Wheatgrass that count more for your health and wellness. What are the other things you need to know about this house of Chlorophyll is what described here.

Wheatgrass is loaded with multivitamins and antioxidants, and there are many health benefits of wheatgrass you can count. Hey, and it is easiest to grow and find a wheat plant. It is the nutrients present in this plant that many health products are commercialized and launched at a staggering rate now. It is time you should be familiar with this grass that stays greener on every side.

Wheatgrass is just a young sprout leaf of a common wheat plant. These leaves are softer and fragile shoots that you can grow in a small space of about one or two feet. The parts that remain above the ground and is often taken in different forms to obtain its benefits.

These young sprouts are house Vitamins (A, E, C, K, and B6), Amino acids, Calcium, Iron, Selenium, and Magnesium. This is the reason why wheatgrass has found its medicinal purposes in this modern age.

Wheatgrass is now used in many products and a medicinal or dietary supplement because of its benefits and purposes.

You can easily find Wheatgrass Beverages, Wheatgrass Tablets, Wheatgrass Juice, Wheatgrass Powder, etc. on the market. The contents based on wheatgrass play a significant role in the natural and holistic medicinal approach. Not now, this plant has been used for such purposes for ages. Modern science has just shaped wheatgrass into bottles and jars.

A leaf of wheatgrass packs several healthy elements like fiber, amino acids, Vitamins, Calcium, and Iron. These elements contribute to some obvious health benefits for sure. Wheatgrass is low in calories and assists in lowering your blood glucose levels. Here are some notable health benefits of wheatgrass you will start experiencing upon continuous consumption.

Wheatgrass juice is undeniably an alternative to blood transfusion. To encourage the consumption of wheatgrass, many major commercial brands have introduced drinks and beverages based on wheatgrass juice and extracts.

If you consume Wheatgrass juice in raw form, you can control your blood sugar level to a notable extent. Research-based facts produced in the Journal of Herbal Medicine and Toxicology in 2009, had shown that wheatgrass improvises lipids and glucose levels and can help you manage your diabetes. According to this research, if you add 15 g of wheatgrass to your diet, you can control your escalating blood-glucose levels along with improvising Triglycerides (blood fats).

Also, for the patients who have undergone chemotherapy, a regular intake of wheatgrass capsules benefits in reducing the after-effects of chemotherapy. The properties of Triticum Aestivum are anti-inflammatory, immunomodulating, and chemopreventive that are beneficial for your health.

The antioxidants present found in wheatgrass reverse the side effects of free radicals in your body. These free radicals are responsible for aging earlier and low immunity. Antioxidants majorly contribute to body metabolism against many mental ailments and depression. The antioxidants also retain vitality to your skin and combat Arthritis.

Wheatgrass is gluten-free, which is a good substitute for people with gluten intolerance. Though there are no scientific proofs of wheatgrass being digestion supportive, there are many regular users of wheatgrass who claimed that amino acids and other vital elements in wheatgrass help reduce stomach irritation and other bowel infections.

It is proven that wheatgrass holds anti-inflammatory properties that can calm down gastrointestinal troubles as a natural remedy. Thus, it is acceptable that wheatgrass benefits the stomach in one way or the other.

Wheatgrass does slow down or kill several types of infections as per earlier medical findings — some infections and resistant to antibiotics which can only be cured naturally through wheatgrass. The antimicrobial properties present in wheatgrass help you fight certain infections and bacterial formation, e.g. Lactobacillus (a common bacteria associated with dental infections).

What is Wheatgrass Powder Side Effects?

As wheatgrass lowers your blood glucose level, extensive consumption may also lead to a diabetic condition known as Hypoglycemia. Whether you have diabetes or not, you need to monitor your use of wheatgrass or its extracts in either form.

Wheatgrass may also lower your blood pressure and also intervene with your glucose blood levels. If you have undergone any surgery, or are readying for one. You need to cease its intake at least a couple of weeks before in any form whether capsules, juice, powder or raw.

Wheatgrass Dangers during Pregnancy and Lactation

The same reasons responsible for causing complications during or after surgery may affect you during pregnancy or while breastfeeding. It is better to consult your health specialist before consuming wheatgrass or its products.

Other Risks of Wheatgrass

Mind taking care of hygiene while growing a wheatgrass plant in your garden. Take precautionary measures and keep the leaves clean to make sure a bacteria or parasite do not infest the wheatgrass plant. Wheatgrass plant easily attracts insects and other harmful microbial moulds that are rarely seen with the naked eye. Wash the grass leaves thoroughly before processing and consuming. 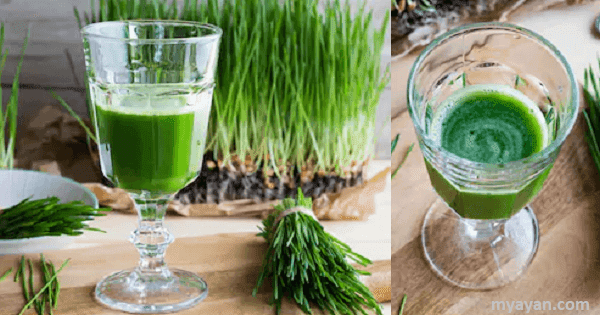 Why wheatgrass is bad for you?

Wheatgrass consumption is bad mainly during or after surgery. It is also considered harmful if you have a low blood sugar level because the excessive intake of wheatgrass juice may also lead to Hypoglycemia

How to drink wheatgrass?

You can squeeze fresh leaves of wheatgrass by directly cutting its leaves and putting into a blender or juicer. For best results and health benefits, drink it on an empty stomach at least 30 minutes before eating or an hour after your meals.

Is wheatgrass good for cancer?

Is wheatgrass good for kidney disease?

If you have a kidney problem, consult your medical expert before taking Wheatgrass juice. Wheatgrass juice is very high in potassium; therefore it is not a suitable drink for people with kidney disease.