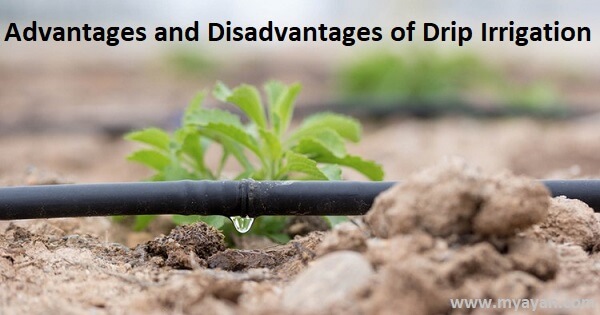 What is Drip Irrigation?

Drip irrigation method has revolutionized the farming system by impacting countries with limited water resources. Drip Irrigation, also known as Micro, trickle, or localized irrigation, involves an economical use of water sources where there is no or little natural water. This method of farming has received worldwide attention from researchers, economists, and policymakers. The advantages and disadvantages of drip irrigation discover the positive impacts and limitations of this method.

A little about Drip or Trickle Irrigation

Modern experimentation with drip irrigation systems began in England in the 1940s. However, not until the innovation of polyethylene plastics in the 1960s did drip irrigating begin to gain momentum.

In micro-irrigation, water is run through pipes having equidistant holes in them which is either buried or lying slightly above the ground next to the crops. Water slowly drips onto the crop roots and stems without any wastage.

The localized irrigation method is more practiced in areas with less water availability. This method of farming is widely active in Middle-east countries and states with deserted lands.

According to the US Department of Agriculture, drip irrigation has vastly become popularly effective in field crop applications. According to the Farm and Ranch Irrigation Survey, This method is currently adopted for over 3.76 million acres of land in the US.

In 2015, out of a total of 63,500 thousand acres irrigated, 5,490 thousand acres were utilized through with micro irrigation systems. Microirrigation is now widely used to produce high-value fruits, nuts, vegetables, and cotton crops. The acreage is expected to be high in the upcoming years.

Higher water intake by the plants encourages their growth. No fertilizer is lost during the process as the vital nutrients are supplied through the pipes and drips. This ensures more overall growth increasing the crop yield.

In 2019, an experimental study was conducted over two crop seasons at the University of California Desert Research and Extension Center located in the low desert of California. Various combinations of dripline spacings and installation depths were assessed and compared with spraying irrigation as a control treatment.

The study found out that the organic vegetable (Spinach) produce through microirrigation was higher than that of yields produced by using sprinklers. This high yield of a crop as a result of the reduction in nutrient leaching and supplying of water only to the immediate rootzones of crops.

The same study compared the total water used during the micro-irrigation and spraying irrigation. Conclusions were drawn in favor of drip irrigation which consumes 30-50% less water than sprinklers in the areas with or without scarcity of water. When applying water directly to the soil, there is virtually no waste from drift, evaporation, or runoff. Microirrigation Conserves water by using moisture only where it is needed, and by eliminating drift, potential runoff, and most evaporation.

Thus, Trickle Irrigation is a very efficient way to produce crops and has more advantages than other methods. For certain crops, this method is much more useful than traditional agricultural, systems where a substantial portion of the water is either lost to evaporation or weeds.

In other methods of farming such as spraying, weeds can grow in beds along with the crop in the remaining soil. Weeds sprout in the spaces faster than the crop itself. Water is applied at the roots of crops directly keeping the remaining ground dry. This dry soil inhibits other plants or weeds from growing in the crop regions.

5. You can save your Water Bills

Water usage is downsized to almost half during a localized method of farming. This efficacy of water consumption significantly saves the expenses that you would have incurred using other watering methods. You can improve your profits by using this method.

Dripping water into the soil doesn’t expose its large surface to water. In fact, the only surface that gets exposed is the small portion around the roots of crops. This reduced exposure ground soil results in a minimized risk of soil erosion. The Localized irrigation method outcompetes other methods like flood or spraying irrigation that affects the soil’s surface through running water.

You can perform drip irrigation on irregular surfaces such as hilly areas. You do not need labor or equipment to level up the land that eventually costs you time, energy, and expenses.

The localized irrigation technique is one of the fruitful methods to boost the higher intensity of agricultural yields. There are some of the limitations that count as possible disadvantages of drip irrigation.

A Drip tape, Dripline, Hose, Flexible PVC Pipe, and timers are the significant components of a drip irrigation system. The initial cost for setting up the system increases with the size of the land and area to be covered.

All these materials definitely need some skilled hands to be installed correctly. Given, the time required to do the installation is also considerable, you have to invest a capital sum in switching to this method.

The localized irrigation system relies on clean and dirt-free water to be transported to the intended crops. Ensuring that every crop bed receives an equal amount of water is one of the cumbersome tasks. Any iron or dirt particle in water can choke tubes or emitters deterring the plant growth.

You need to constantly monitor the filtering system at your end to avoid any such incident. If the soil is full of such minute particles, then you have to replace filters regularly.

Every crop is watered for a fixed period, and you’ll require to move lots of hoses in the course. The installation and maintenance costs are sometimes inefficient to compensate for because of short-term use. For the end of every season, you will require labor to wind the system up and to reinstall it in the next season according to the type of crop.

Since the equipment used is made of plastic and PVC, environmental factors like UV light and heat can deteriorate the piping system making it temporary. Due to these drawbacks, Localized irrigation is still considered a temporary arrangement for crop production with little long-term benefits.

On the other hand, driplines are also subject to damage by human or animals’ intervention; take rodents and ground animals for an instant.

Researchers have lined up possible theories to support this new-age irrigation method that both saves the soil and the human effort. It’s the benefits of a drip irrigation system that outweighs its limitations in the far-flung areas where water is hardly available. Many nations have given a green signal to trickle irrigation operations given its considerable advantages to the economy and crop production.

What are the advantages and disadvantages of drip irrigation?

Advantages: This method is highly efficient for lands with limited water supply to boost crop production. This method of irrigation is useful for every type of land and prevents soil from erosion. Disadvantages: The biggest disadvantage of localized irrigation is the high maintenance of the dripping system to ensure water flow without clogging the as emitters and driplines. Moving a system during crop rotation also requires labor and costs.

Why drip irrigation is the best?

This system is beneficial for a small piece of farmland without investing largely in water supplies. The advantages of drip irrigation over spraying irrigation are that there is little water loss due to evaporation or runoff, riddance of weeds, and excessive fertilizers are.

How long should I run my drip irrigation system?

You need to run the drip system for at least 10 minutes. For this, you need to measure the amount of water in a container then multiply by hours to deduce an idea about how much water gets dripped per hour. You can also run it according to the rate of flow depending on your requirement and the measure of water.

What is the importance of drip irrigation?

Drip irrigation is an enormously efficient water and nutrient supply system for crops. Through this system, you can deliver water and nutrients directly to the plant's roots zone without overusing or wasting the resources.