Advantages and Disadvantages of Fake News

Be it social media or private chat groups, spreading fake news is a common way to get reader’s attention, especially in a dire time like now. But who gets the benefits of doctored information and why? What’s the purpose of spreading fake news is still a big riddle to solve. Most times it’s the political conflicts that rave-up a simple incident into warfare. The Advantages and Disadvantages of Fake News discuss the impact of the digital age evil.

Fake news has a long-lasting relationship with social media platforms. Facebook, Twitter, and Instagram are where people can spread and mislead millions of users within minutes. Fake News, surprisingly, spread faster than any infection.

With COVID-19, the amount of Fake News has increased substantially and has generated situations that negatively impact public health in multiple world regions. Thus, we are struggling with the virus and an important infodemic based on ignorance and misinformation.

What are the Advantages of Fake News?

Apart from the pandemic, hundreds of incidents where people or political groups used fabricated information or altered data to misinform people. Obviously, for self-interests. It’s time to know can fake news be of any benefit; if yes, then who?

Digital News Media is the cheapest and easiest way to get in touch with the users and deliver information. So, that’s how it goes; a fake new website display draws the reader’s attention and makes money whenever users click an ad.

The websites partner with ad providers, giving them commissions based on how many viewers you manage to get through fake news. The biggest reason why readers love to read fake news is it’s compelling and arouses curiosity among users.

Influencers with millions of fan following get money from their sponsors Social media influencers need daily content to draw their followers’ attention. Especially those who don‘t have special talent but republish the content or misrepresent the reality to grab public attention are the ones who benefit from fake news.

TikTok Video App is a better example of what many users do by scripting the real scenario and fooling the viewers. Many others spread false information through YouTube to influence the public and show they are the experts.

The majority of the conversation these days revolves around its role in political campaigns and influencing civilians views’ on political parties. Today, fundamentalist violent extremist organizations have utilized social media to gather support for their groups by posting videos and articles of their actions online for the public to see.

Incidents like riots or videos that incite communal disharmony are trends that easily get millions of views within minutes. The rest is done by the political leaders who look for such information to blame the opposition. Most political parties take the advantages of fake news during elections.

Many individuals use fake news in the form of satire or parody to have fun and get attention from their friends. Everyone loves to see funny stuff online, and most of the content you’ll find on the internet is either fabricated or twisted to make it more entertaining for viewers.

The actor uses doctored images to manipulate users and let them believe the content is original and genuine. People sharing links of money-making apps encouraging other group members to follow the same is another example of manipulating.

What are the Disadvantages of Fake News?

There are many cons of fake news, which can escalate further at a wider level if not tackled on time. From a personal level to global, these Disadvantages of Fake News can affect social or economic harmony.

As said before, many political groups in the opposition divert the public’s attention from the main agenda using manipulated news. This is done especially to change public opinion about the ruling party and gain public support.

Incidents like cracking scams or finding flaws in the opposition’s system are common examples of changing public opinion.

2. Defamation is among the disadvantages of fake news

Every person has a right to express; this right is oftentimes misused to defame powerful or influential personalities such as business leaders or celebrities. Fake news is the best way to spread misinformation across borders.

News about celebrities having illicit affairs with someone has been persistent till now. Celebrities' death hoaxes are a common type of fake news which many people have used to draw viewers' attention.

When an influential person says it, people tend to believe it. Developing a false perception about someone is one major disadvantage of fake news. Whenever a strong personality with millions of fans misinforms people about an incident, they would believe it blindly.

People would either change their perception about the person being talked about and will be misled by the false information without digging down facts on their own. The main motive of the actor is to frame an issue or an individual by misleading the public.

There are 80+ fake news websites that exist in the USA only, and that happens in every other country. People tend to heed to news depicting violence and that’s one of the concerning disadvantages of fake news websites. Thanks to the social media that takes care of circulating hoaxes within minutes.

A fake violent incident may lead to political warfare, social unrest and can even disrupt a nation’s economic growth when it turns into a communal riot. These incidents can trigger more violence in a region that sometimes become a serious issue to be addressed globally.

With the surge in Coronavirus pandemic, there has been a surge in deaths associated with fake Coronavirus news too. In countries like India, people generally rely on messenger apps such as WhatsApp to consume news.

Platforms such as WhatsApp are the most convenient way for undesirables to spread false information. Rumours leading to mob attacks in India, mass poisonings in Iran, and death threats to telecommunications engineers in the UK are some consequences of spreading fake news. Spreading fake news can also be fatal for many individuals as it taints their reputation.

Conclusion on Advantages and Disadvantages of Fake News

Evaluating these Advantages and Disadvantages of Fake News, you must understand the severity of the information you consume daily. There are severe disadvantages of fake news than its benefits.

Readers are the ones who get nothing return from fake news. Once it starts spreading, there is no way to stop it. Be it for entertainment purposes or social issues; it’s the readers who need to determine how authentic and trustworthy news is. 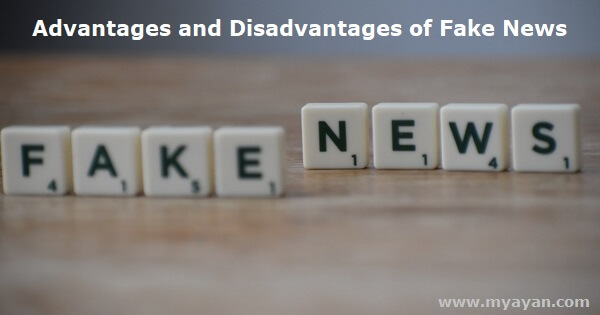 Why is fake news bad?

That's been pretty well covered at this point. Instead, it spreads unsubstantiated rumors and outright lies, polluting people's minds with stuff that isn't true. It got so bad in our last presidential election that Facebook introduced a new flag for disputed stories. The problem is that not everyone agrees on what constitutes fake news -- or, even if they do agree, not everyone will agree with what governments do about it.

How to Spot Fake News?

Since Facebook has taken charge of the disputed flags, there's much less outrageously fake stuff making headlines. But it's still out there, and getting your news from one source is the worst way to get them; look at multiple sources. If you're looking for news to share on social media, make sure you read through what you want to post before posting it.

Why Fake News is Fun?

If you believe in the saying, There's no such thing as bad publicity, then fake news might be fun for brands. However, often, when an issue becomes super political, brands risk alienating half their audience by taking it aside. Depending on your brand's voice and values, that might not be an appealing proposition. On the other hand, fake news can get a brand lot of publicity from people who don't agree with them.

Is there a risk of Fake news?

Many people believe that there is a risk of fake news. Fake news is like propaganda, typically used to influence and change people's views and beliefs on certain subject matters. It employs exaggeration and sometimes complete fabrication, but it also highlights things that happen in the world that might otherwise pass by without notice.