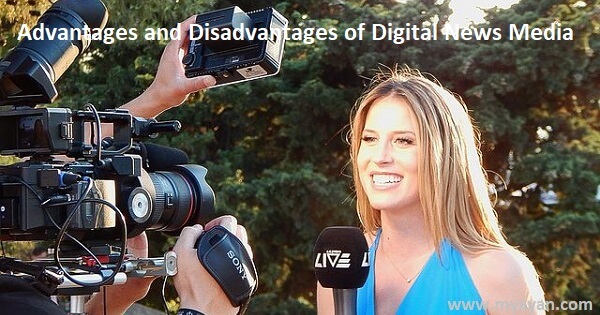 Digital News Media shapes up the way you stay up to date with the goings-on around the world. A daily dose of updates is what you look for every morning when you wake up. For digital platforms impacts the society and lets you stay alert while you are on the move, it has become the need of the hour. Let's discuss some Advantages and Disadvantages of Digital News Media in detail.

Since a majority of readers have advanced to technology, there are reasons why every major to small media agency have digitized themselves. Becoming a part of our personal lives, these major benefits of digital news media can be seen in the following ways.

Every piece of update you receive is through electronic media hence saving the environment. A tree flourishes for every paper saved. With apps available for every newspaper, Media companies can contribute to utilizing natural resources sustainably.

2. Updates on the Go

Digital News Media allows you to select the type of news you are into, and these updates are just a tap away. News Apps provide you relevant content as per your preference that you can access with ease anywhere and at any time of the day. So, don’t worry if your newspaper guy does not show up at times.

More and more users receive updates through social platforms like Facebook and Twitter. As celebrities and leading politicians use such platforms to deliver their concerns, many people are influenced by what appears on their profiles. You can share your general views about any of the content that seems sparking.

Digital News Media Benefits some professionals who are sound with the latest technological concepts. Digital News Platforms and forums are suitable career launch pads for such people who can join the revolutionizing world and influence their followers. Jobs like social media moderator, Social Media Manager, Social Media Strategist, and Chief Marketing Officer are some renowned profiles in the Digital Media sector.

With everything moved to the digital platforms, digital reporting or digital journalism has turned into a much easier choice of career for many. Many Journalism Institutes have launched digital programs to get the youngsters going with their skills to reporting and spreading an occurrence swiftly as it happens.

According to Upwork’s "Freelancing in America Report, 2017," online journalism jobs have boosted to 71%. Edstrom and Ladendorf also explained further that freelance journalism, worldwide, is growing as a result of shrinking newsrooms. Digital News Media benefits freelance journalists in terms of flexibility and reduced costs as they don’t have to worry about the setup required for reporting. Freedom of expression is also a unique experience for freelance journalists.

Thanks to the internet that enables News Media to bring coverage to the global audience. News channels are not just restricted to a particular now, as you can access content from anywhere. Digital News Media removes regional restrictions by presenting the regional events to the world expanding their viewership.

With the ease of access and instant updates come some negative effects of Digital News Media. As a concerned reader, you must be able to aware enough to figure out what are the cons of digital news media of this age such as these.

A sudden wave of fake news hits a wider part of global population when circulated through digital platforms like Facebook, Twitter, and WhatsApp. Concern about misinformation and disinformation remains high despite efforts by leading online journalism platforms to build public confidence.

In Brazil, 85% agree with a statement that they are worried about what is real and fake on the internet. The concern is also high in the UK (70%) and the US (67%) followed by Germany (38%) and the Netherlands (31%). Unfortunately, there are less provisions to hold the spread of fake news through social media apps like WhatsApp.

Accessing the internet is more convenient to everyone. It’s easier for unscrupulous elements to spread negativity about a particular individual or group. The spread of unfounded rumors has led to a spate of uncivilized acts in countries like India. Several countries have set up ‘tip lines’, appealing to the public to flag illegal or dangerous content.

The spread of negative or hateful news often happens via groups that are set up specifically to discuss sensitive issues.

Many popular news media allow access to readers only after a paid subscription. Paid subscriptions for daily news is practiced majorly to contribute to revenue. Although it’s a must-do for news media these days, many readers would disagree with paying extra money given that there are plenty of other news websites to get the recent news.

Whether you watch your news segment online, on TV, or through an app, you are more likely to spend time on advertisements. Mobile Apps ask you to pay for an ad-free version, which comes as one of the most troubling disadvantages of digital new media these days.

Apart from the leading international news channels, internet has helped many less popular news channels to evolve at a rapid rate. There is more news around the web circulating through different platforms. This is rather more confusing than to figure out what’s going on really.

Too much information partly reflects how constant news updates and different perspectives can complicate reality. A common complaint is that users are bombarded with multiple versions of the same story or the same alert. The perception of news overload is highest in the United States (40%) followed by Denmark and the Chech Republic.

It’s hard to predict what lies ahead as the number of information providers staggers every day. As technology enables people to find better career options in Freelance journalism and social media, concerns about the information misuse grow parallel. As for fabricated news, it’s best to cross-check the source to dig the truth.

What are the advantages of digital media?

Digital media is revolutionizing the way we work, boosting productivity and enhancing flexibility for employees and employers. Digital media enables social interaction and empowers people. People can voice their concerns through different forms of digital media like social networks blogs, increase their civic participation, and facilitate the creation of communities.

What is the advantage of digital newspaper?

The online newspaper provides a forum for readers to interact with the paper itself. Readers can now leave comments, watch videos, view photo slideshows, and often contribute their own opinions and written pieces to the paper.

What are disadvantages of digital media?

Digital media has revolutionized the way people access information. However, it has also raised several issues such as the spread of misleading information, hate speeches, crime and terrorism, privacy concerns, social disconnection, manipulation, and job insecurity.

What is the impact of digital media?

Digital media has brought people together like never before, breaking down location, time, and social context barriers. Its ability to spread information quickly and easily has led to new learning methods, providing underserved communities with opportunities they may not have had before.