Advantages and disadvantages of Fungiculture

Fungiculture helps you make good use of space and Ramp up food production. This process refers to growing fungi such as mushrooms as food, medicines, etc. The production of fungi requires different techniques and conditions, such as moisture and temperature. Thus the conditions for themselves are the main challenges of fungi culture. The Advantages and disadvantages of Fungiculture detail the possible drawbacks and scope of this farming method.

Fungiculture seems like an answer to farmers with no or less access to land resources. Malawi women entrepreneurs are the best example of how fungiculture benefits you financially. Fungicultre employs various methods such as termites, ambrosia, Leafcutter ants etc.

What are the Advantages of Fungiculture?

Mushrooms are not plants and hence need different environments for their growth. Most plants grow using photosynthesis, in which sunlight is a major component, but few mushrooms do not require sunlight for photosynthesis. Instead, it is required as a stimulant for fruiting. Mushrooms are the elevated fruiting bodies of fungi, and out of 1.5 million fungi species, 69000 species bear these spore-bearing mushrooms. Here are some advantages of fungiculture.

There is very little cost associated with the cultivation of fungi as growers don’t need access to land, and the government supports the finances. The government also empowers small-scale farmers in the production of profitable mushrooms and other useful fungi.

Malawi was a nation hit by poverty where women have started working on mushroom cultivation with no investment. But, now the business has flourished in the country.

Starting as a farmer or entrepreneur means you'll need trained people to assist you in managing the growing areas. The farming type also creates job opportunities in industries for many. Several jobs are produced each year in this field, and the number of professionals is still growing.

The returns are higher than the investment needed for the production of useful mushrooms and related fungi. Due to high demand and nutritious edible supplies, they sell good and gives farmers good returns for their produce.

Fungiculture is different from traditional farming, which depends on pesticides use, light, and air. Unlike other crops, less maintenance is needed for fungus growth, and the growth time is also less. It can be grown all around the year with proper moisture and humid conditions. As crops can be grown indoors, a proper oxygen supply is needed to ensure their proper growth.

The growth of fungi is based on dead and decomposed organic waste from plants and trees, and after the harvest, it can be returned to the land. This makes the utilization of organic waste and recycles it for further use. With modern technology and using less non-renewable sources of energy, farmers spend less on recycling or waste management.

What are the Disadvantages of Fungiculture?

The process of photosynthesis doesn’t occur in fungi growth, and it is dependent on its host for most of the nutrients. The basis of fungiculture is its diversified use from food to medicinal purposes. The benefits of fungiculture may outweigh the limitations but are worth considering. A few disadvantages of fungiculture should be kept in consideration especially if you are a start-up.

The yield quantity is not under the control of farmers as it varies due to various reasons. This puts a burden on the marketing and sale of useful fungi in the market, and variations can cause an undetermined supply of mushrooms. Plus, the fluctuating amount of products may also disturb the nutrient level or affect the growing conditions.

Since the starting of fungiculture the quality of crops cannot be controlled under any circumstances. The control over the production is partial, and hence the quality is not assured despite the various precautions taken by the producers.

3. Pest Infestation is one of the common disadvantages of fungiculture

To ensure proper seeding and growth of mushrooms, various fertilizers and pest control methods are needed to protect the crop from bacteria and other pests. However, mushroom cultivation faces problems related to microbes and hence needs proper care.

The proper moisture and dark environment needed for the fungi growth is hard to create and needs proper training and knowledge. Various small-scale farmers opt for monoculture in fungi farming, which has certain restrictions on its proper growth.

About 2000 varieties of mushrooms are edible, and overall, 99% of the total varieties are safe and are eaten. But the poisonous ones are not so different from the edible ones, so proper care must be taken before growing them. If you are not aware of what you are growing, your lack of knowledge may cost you more than you can imagine.

Conclusion on Pros and Cons of Fungiculture

Fungiculture has grown over the last few years, and due to the high nutritional content compared to organic farming, its production has also interested more people. Under controlled conditions in the growing of edible and useful fungi has proved beneficial for small-scale farmers.

Still, the uncontrolled phenomenon related to its harvest also prevents some from cultivating it. The marketing and sales of mushrooms are not very hectic as they are in demand due to their qualities in different sectors. Also, it is used as the tastier food alternative by a lot of people. 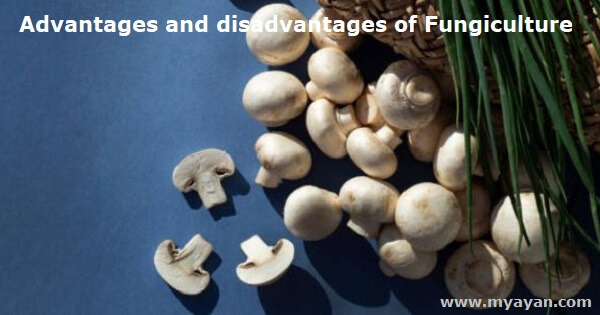 What are the advantages of Fungiculture?

1. The fungal plants can spread very rapidly.
2. They do not need any other form of energy than bacteria or algae, so lower input costs
3. Once the fungi have grown, you can start harvesting within 4-6 months.
4. The fungi do not have to be fed; they are self-sufficient
5. All parts of the fungal plants are edible, unlike other plants 6. Fungi can grow on almost any form of biomass.

What is the scope of mushroom farming?

Mushrooms are one of the world's most important agricultural enterprises. It is also very profitable since it may be set up with minimal investment and small room. As a result, many farmers are turning to mushroom cultivation as an emerging source of additional income.

Is mushroom farming good for the environment?

Mushroom cultivation produces significantly less carbon dioxide ? and needs far less land ? than other agricultural methods. With their low amount of carbon dioxide emissions, Mushrooms are the MVP in terms of sustainable agriculture because they require little growing resources, energy, water, and land while still emitting low amounts of CO2.

If done on a large scale, mushroom cultivation is a labor-intensive operation. Composting, spawning, casing, and spraying of the beds are all handled by experienced staff.