Advantages and Disadvantages of Federalism

World’s strongest economies and political powers, such as the USA, follow federalism due to its advantages. Countries like India, Brazil, Malaysia, Mexico, Russia, Germany, Canada, Switzerland, Belgium, Argentina, Nigeria, and Australia have followed this mixed or compound mode of government to operate successfully. When it comes to the system of this practice, there are many advantages and disadvantages of federalism. Some of the pros and cons of federalism are presented here as to why the benefits of federalism outweigh the detriments of it.

It’s the constitutional division of power that both the state and federal governments of the United States share to hold different types of decision-making power at different levels to allow a degree of political independence in an overarching structure.

It’s a political system where two or more governments share authority over the same geographical area. Most of the democratic countries in the world today use this method of governing, including Australia, Canada, India, and the United States.

What are the advantages of Federalism?

There are many advantages of federal system of governments, the benefits of which many consider overcome the negative impacts. Following are the reasons why federalism is a healthy practice to follow that even European countries go by.

Federalism is a practice in which state and federal governments sort out several issues about the local residents. State governments act responsibly to address the state-level concerns by understanding their citizens’ interests. On the other hand, Federal government authorities can opine the state authorities better to enhance the entire decision-making process.

Justice is one of the most significant advantages of federalism as it serves as a deterrent to tyranny and runaway power. The method of dividing the power between the federal and state governments and spreading the national government’s power among three branches ensures that no single government can rule or misuse the power. There is no way to acquire runaway power in this structure unless voters approve of that process first. Even though a party gets the majority in the government, it can still be difficult to create drastic changes that impact citizens.

In countries where power is shared with state governments while separating the federal government into three branches, the decision-making power is distributed in multiple groups instead of a single person or group of people since excessive power among a single group can be corrupting.

By diffusing power to multiple authorities or offices, a single division won’t take over the country or state. When power is decentralized in a government, there are fewer issues with individual corruption that can impact the entire country.

Under the structure of federalism, citizens become more involved with their government in different ways. Citizens elect their representatives in the governing body. People can visit their local office to express their concerns without fear of judgment. Also, by decentralizing all power into a national government's hands and sharing it with state governments, it's a citizen who can affect the government and its policies.

When the power is decentralized and diffused among the states, the states have a right to solve some of their problems, making the state government systems more efficient. A national solution to all problems can be more effective in some states and less effective in others. The mixed decision-making power can work in either way to work best in a state.

What are the Disadvantages of Federalism?

Federalism may have benefits in some states, but there are some disadvantages of Federalism some states are or have been facing already. For example, issues as same-sex marriage, legalizing the use of marijuana for medicinal purposes, and the way the federal government responds to natural disasters can be different and unacceptable in some states.

Even though the power diffuses between several authorities, the majority gets favor from the governments as the official representative is elected by most citizens. Communities can set their laws under a federalist structure; it easier for some groups to prioritize the needs of the majority over the needs of the entire community. Slavery and segregation are the best examples of favoritism.

The structure of federalism encourages local communities to self-govern efficiently. This process is usually good to help keep households safer irrespective of their location within the country. Federalism can also pass ridiculous laws to make a political statement, discourage tourism, or some other specific purpose. Some of the laws passed within the structure are:

3. Federalism can cause Conflict between two states

In case a decision made by the national body doesn’t resonate well with the local governments, the reason can lead to imbalances and fights between the state and federal bodies. Such incidents may lead to questioning the credibility of the federal body. One of the most significant examples of this issue involves the legalization of recreational cannabis. At times blocking the implementation of federal law can be beneficial, but the same can slow down the process of change over time.

5. Federalism can benefit only the rich

Where majority rules, it’s the one that reaps maxi mum benefits from the federalism. It’s obvious that many high earners would have links in the official departments. 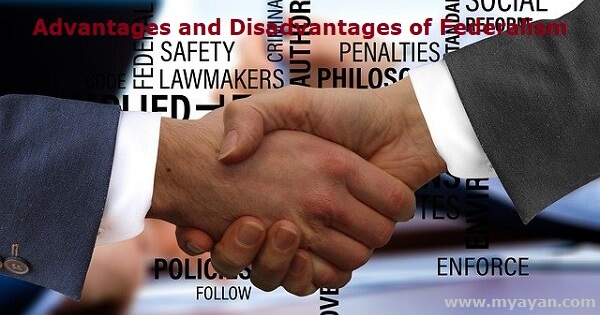 What are some disadvantages of a federal system?

There are several drawbacks to Federalism. The most significant of these is economic disparity between states, race-to-the-bottom tendencies (i.e., states compete to attract business by decreasing taxes and regulations), and the difficulty in taking action on issues of national importance.

What are the advantages of federal government?

What are 2 negative things about the Articles of Confederation?

The framers of the Constitution had intended for it to be a limited government that would not have the power to tax and other powers. The federal government did not have the authority to tax or regulate international and interstate commerce. There was no legislative branch to enforce any laws passed by Congress. There were no national court systems in place.

What are the challenges of Federalism?

The issue of Federalism is the division and assignment of natural resources, such as rivers, forests, mines, and other natural resources, between federal states. It also creates disaster management difficulties, plans, policies, and standards to address these issues.