Advantages and Disadvantages of Living in Vermont 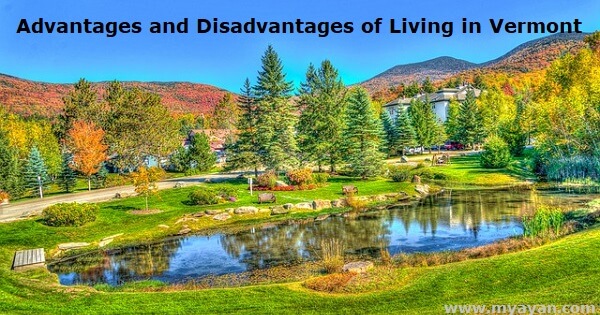 Vermont life is often praised for simplicity, quietness, and a pleasing atmosphere. The state has also recorded the lowest crime rate in America. The small and affluent state with the second-lowest population density in the US has many surprises for new families arriving in. If you have plans to settle in a humble state, it’s important to know the Advantages and Disadvantages of Living in Vermont.

What are the advantages of living in Vermont?

The state is comprised of small towns closely surrounded by each other not just by distance, but hospitality and relations. When there are less people to meet, the closeness among people is the first one to mention among the advantages of living in Vermont. Here are other reasons why you should live in Vermont.

1. You can enjoy your space

With a total population of about 625,000, the state has fewer residents than Alaska. This means you can enjoy your private space and admire the natural landscapes and valleys without being disturbed.

Burlington is the largest city in the state, with around 40000 people residing currently. The number is quite significant compared to other states like Vermont or Montana. Also, there are plenty of musings to find, such as rivers, creeks, and lakes. For some, it’s a lifelong dream to live in Vermont.

2. Simplicity is one of the embraceable advantages of living in Vermont

Vermont is one of the American States where people prefer to stick to a simple approach to life. You won’t see any billboards queued next to the farmland, and that’s one of the specialties of New England. They have well-preserved their traditions and originality.

The state laws have made sure any outsiders don’t harm the natural outfit of the state by banning roadside commercials. Furthermore, the state prefers to experience shopping at general stores rather than malls or outlet complexes. However, you can visit Walmart, which sure won’t be easy to get to.

Since keeping traditions alive is the specialties of Vermont residents, having a caring neighbor is not much of a surprise if you recently moved into the state. Not much has changed much; people still mind their own business but also care for each other.

Friendliness is one of the greatest advantages of living in Vermont, as people ultimately find a way to mend their differences with each other at the end of the day. So if you come across two guys arguing over issues in the morning, you’ll see them sharing the same table at the diner in the evening. Don’t be surprised.

It’s easy to get access to hi-tech healthcare facilities or the best education for your kids in Vermont. The cities are closely located, which lets you move from one town to another. You don’t have to drive too far from your place to get essential supplies either.

Driving from Burlington, you can reach Boston within three and a half hours, Syracuse in around 4 hours and 45 minutes, and New York within five and half hours. The Canadian city Montreal being closest to Burlington is the quickest to get to; you can reach there just under a couple of hours.

Nothing is too far from you when you perfect and well-managed transit system in place. A well-developed transportation system is among the top advantages of living in Vermont, as you can save your precious time.

Amtrak train runs from Rutland directly to New York, and two national highways are running through major cities. In addition, medical centers along the road are much help in case of emergency. Moreover, most cities are small, which means that there are many scenic views to enjoy once your drive out of the town.

What are the Disadvantages of Living in Vermont?

It may be hard for you to handle the summer heat and winter snow, especially while cooking in the kitchen. Among other things, that brings major disadvantages of living in Vermont to light.

Beauty aside, winter can be the real deal of Vermont Life, especially if you are not used to it. So get ready to drive past the fog and showers, making it difficult to drive as the roads are sometimes laden with potholes.

Plenty of snowfall can force you to stay indoors as it hinders vehicular movement permanently, sometimes for days. So make sure you are well-prepared and cozy to brave the weather in January and February. You might as well shop for winter clothing for yourself and your family.

2. Life in Vermont for Job seekers feels like a Roller Coaster Ride

While some parts of the state are thriving economically, some parts have limited job options for people. Many households in Vermont work seasonal jobs rather than working full-time.

You’ll hardly see someone sticking to one job all the time; there is always a shift as the season changes. Someone working a ski resort will find another job in the summer. Make sure you have a permanent job in hand to secure your financial ends, as a lot is coming your way as you settle in.

3. Beware of the Mud Season

If you can withstand winter, you sure can tolerate the mud season. Mud season hits right after snow starts melting, and the ground becomes extremely wet. The process takes its toll throughout Vermont. Ensure you have a separate Mud Room to keep muddy shoes aside and help your stay house mud-free.

If you haven’t heeded to mud problems, the extreme wet conditions can dampen the woods. Make sure you are well-equipped before moving in.

4. Appreciate and Accept the Local Brews

If you have a specific taste in wines and beer, you won’t get lucky often in the local bars of Vermont. Vermonters take the utmost pride in their homemade brews, and many breweries craft their own delicacies. You have to appreciate and accept what the bars offer not to make the locals feel offended. However, to get your favorite brand, you may drive far out to Walmart anytime.

5. Poor Internet is one of the major disadvantages of living in Vermont

The state prefers to focus on traditional values with the least intervention of outside technology. This reason is probably why you may have to deal with poor internet and cellphone reception at times.

Vermont majorly has farm life and natural sceneries all around. So, if you are into the world of tech or rely on the internet for your daily official activities, beware of the rattling speed. The problem is persistent in rural areas of Vermont.

Conclusion on the Pros and Cons of Living in Vermont

You can understand and get what you need after going through these Pros and Cons of Living in Vermont. Be well-prepared for the bad weather, bad roads, and probably cost of living and rentals. All in all, the state is full of surprises worth living for. The problems seem minuscule and outweighed by the experiences you will have in Vermont.

What are the downsides of living in Vermont?

1. The winters are long and cold.
2. There is a relatively small population base, so there can be a lack of diversity in culture and interests.
3. The summers can be short (and sometimes rainy).
4. Compared to other states, Vermont's median income is low and living costs high.
5. There is high state and property tax.
6. It's not exactly a career destination for many people outside the state, so there can be problems finding good jobs if you don't want to be self-employed.

Is moving to Vermont a good idea?

Vermont is one of the safest states in America, with crime rates consistently at the top of the charts for safety. This makes it an ideal location for families, retirees, and anybody else seeking a secure and safe home to reside in.

Is it worth living in Vermont?

Vermont has access to stunning and natural areas, organic and healthy food, highly conscious citizens, pleasant locals, and a laid-back way of life. So if you're OK with living in a small city or rural area, Vermont is an ideal state to call home.

In the United States, an estimated 17.3 million people suffer from depression. Unfortunately, people with depression and mental illness face considerable difficulties getting access to mental health care through insurance.